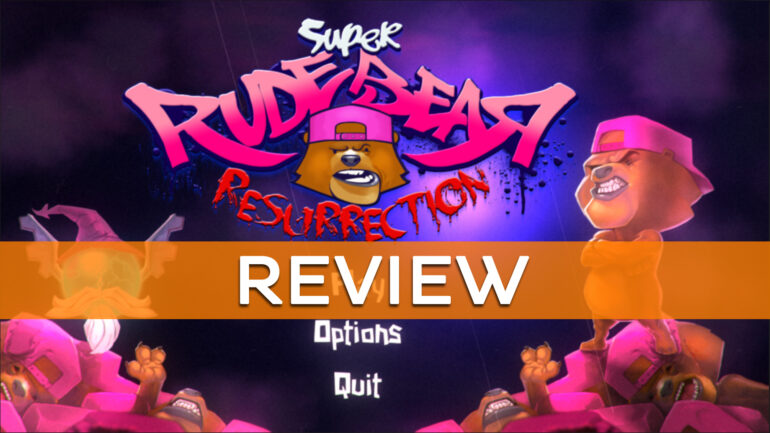 Die, die, and die again. Death is going to be your friend, a whole lot of the time, in Super Rude Bear Resurrection. Luckily, you’ll be having a whole lot of fun doing so, thanks to this rude little bear with a cap. Who knew bears could jump? 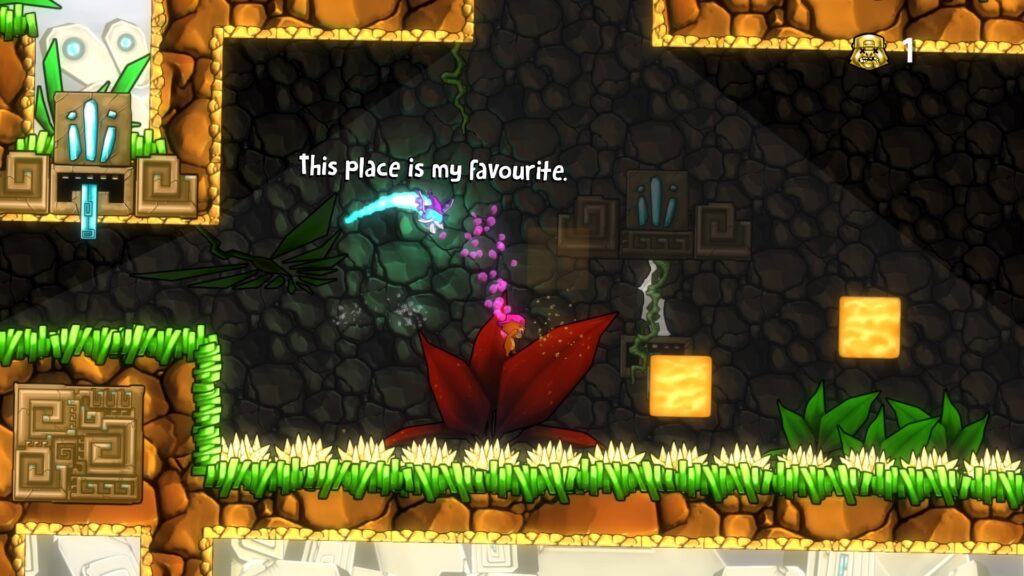 Super Rude Bear Resurrection has all the bells and whistles hardcore platforming fans could ask for; tight controls, twitch-reaction obstacles, clever level design, and — most importantly — instant respawns. The game controls with the uttermost precision that you would expect from a platformer with this level of difficulty. Each death is a consequence of your lack of timing and precision. However, there are moments that will catch you by surprise, but this game begs for you to replay it to the point of mastery, so a death here and there is part of the road to success.

Despite the game’s difficulty and precise controls, it is designed beautifully so that any player can eventually waltz through a level, just like how a rude bear should. One is your fairy companion, who can go ahead of you, so you can plan ahead on how to navigate through a level. This makes things a bit easier, but it can also remove things, thus taking away that added ease. Each time you die, your corpse remains, so as to cushion your landing on spikes, or act as barriers for projectiles. Here the fairy can reset things, by removing all the corpses, which makes things as hard as they were to begin with. However, it can be a bit of a nuisance, sometimes, with the amount of text it puts on the screen, while talking. There were times where the amount of text would even cover up nearby obstacles, causing me an untimely death. Thankfully, there’s an option to turn the fairy dialogue off, which is best when going for a perfect run. 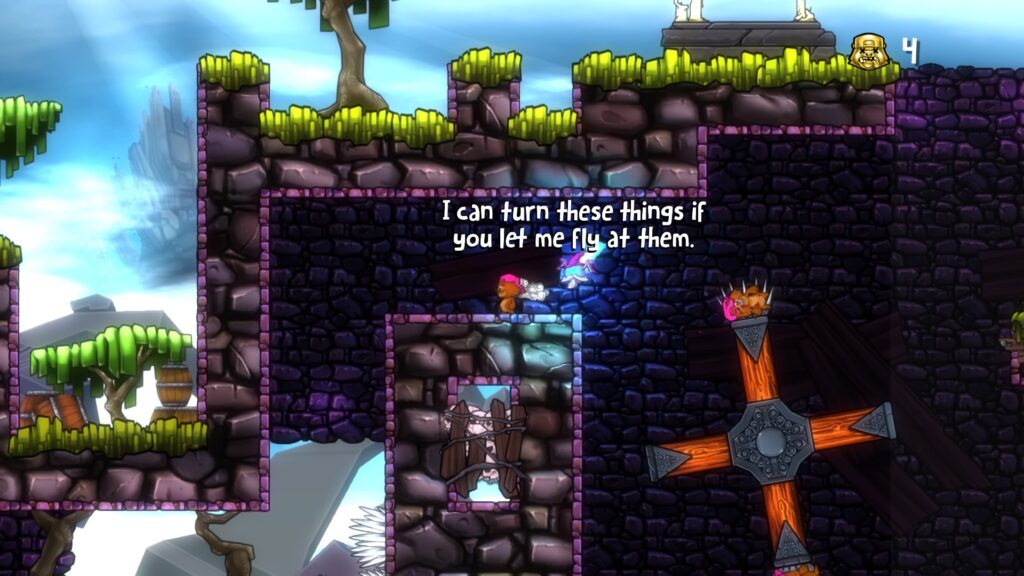 Along with the fairy’s forward-navigation ability, the added telltale sign when you’re about to hit an object that will kill you. The screen goes dim each time you’re near something deadly, which adds not only a warning sign, but a little bit of tension for that adrenaline rush of getting through each stage.

Even though you’re given enough leverage to not blame the game for your deaths, the levels are designed in a way that they will surely kill you. Spikes, projectiles, falling stalactites, and more, all designed to send this rude little bear to his rude death. Every level isn’t afraid to throw something new at you, while also cranking it up to eleven as you progress further. Many times I was just taken back, thinking “How in the hell am I supposed to get through that.” Not only are the main levels challenging, but there are secret levels to be found that will test your skills to the nth most degree. This adds even more replay value on top of the no-death-run for each level.

While it does show that the game’s design has the player’s ability in mind, it seems the bosses are a bit to be desired for. I admire the effort to stray away from the usual platformer boss stereotypes. However, in execution, it doesn’t pay off. The bosses come off as clunky and unintuitive, with a lot of frustration. You’ll be dying a lot more often than actually defeating a boss. It’s cool to see that platforming is still the main mechanic, but unpredictable patterns and little room for error, cause the masochism to go a bit too far. 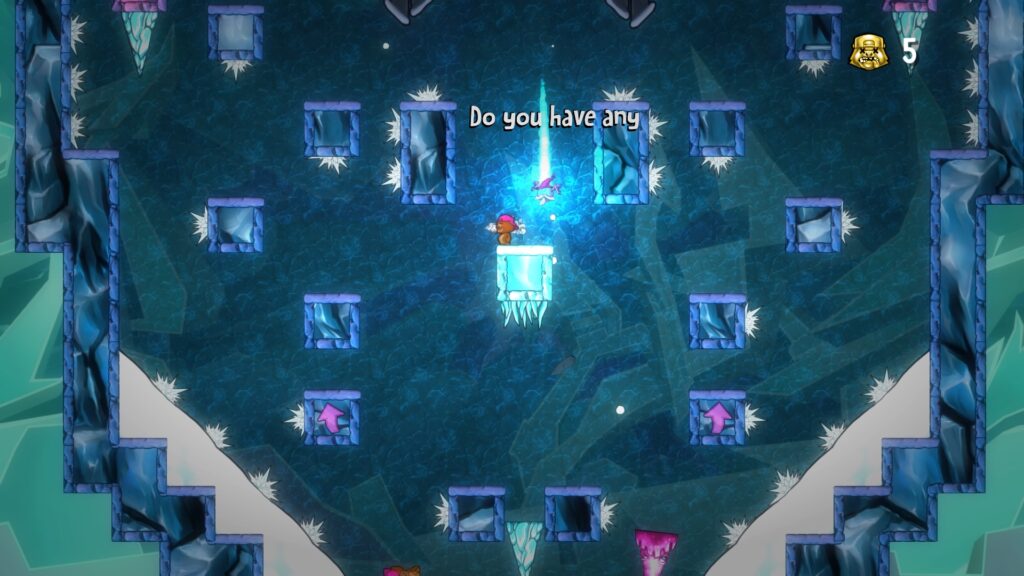 Bringing it back, though,  is the soundtrack and visual style that marries the game together. The grimey beats, produced by Deeco, give that flare of intensity and hype as you die through each stage. Plus, it’s definitely a soundtrack you’d want to listen to, even when not playing the game. The soundtrack style is also in sync with the game’s visuals, with the game bursting with bright, neon colors and bloody corpses — which are your own — everywhere.

Overall, Super Rude Bear Resurrection is a platformer, which shouldn’t slip under your radar, especially if you like getting kicked in the balls. You’ll die over and over again, but you’ll have a lot of fun doing so, while some grimey music blasts in the background. Also, be sure to try and beat the whole game without dying, there’s a $1000 waiting for you at the end of it.