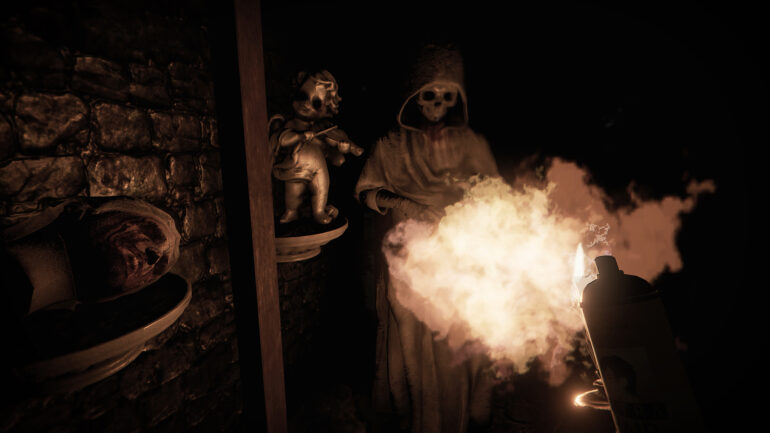 Wales Interactive have announced the multi-platform VR horror, Don’t Knock Twice, is out today on PC, PlayStation 4 and Xbox One. Players can now play traditionally on PC and consoles as well as in VR on HTC Vive, Oculus Rift and PlayStation VR.

Don’t Knock Twice has been optimised for VR with realistic visuals, and is best experienced in VR. However, the game was designed from the ground up to be played with or without a VR device. The VR game modes feature a wide array of play styles to be accessible by all, featuring standard controller support on PSVR/Oculus Rift as well as Oculus Touch, Vive Controllers and single or dual PlayStation Move controllers.

Due to a high volume of community request, Don’t Knock Twice now features standard locomotion as well as the default teleport locomotion. This has been implemented in the PC version and will release in an upcoming patch for PS4. Players choosing the walking locomotion option, will not be forced to look in the direction they are walking in. The player will walk in the direction their head is initially facing, but it will unlock the player camera, giving access to look around whilst walking.

Players will also have the option to play seated, standing or room-scale and have extra intuitive control features including an optional one-click 90 degree rotate button for PSVR/Oculus Rift as well as a “stretchy hands” distance grabber for Oculus Rift.

Don’t Knock Twice is in partnership with the 2017 horror film by Ffilm Cymru Wales and Red and Black Films. The film and game are both set inside an authentic, real-life Welsh home, and players will search the manor from top to bottom for hidden clues, as well as wield and interact with almost every object they come into contact with.