Everybody wants to rule the world. 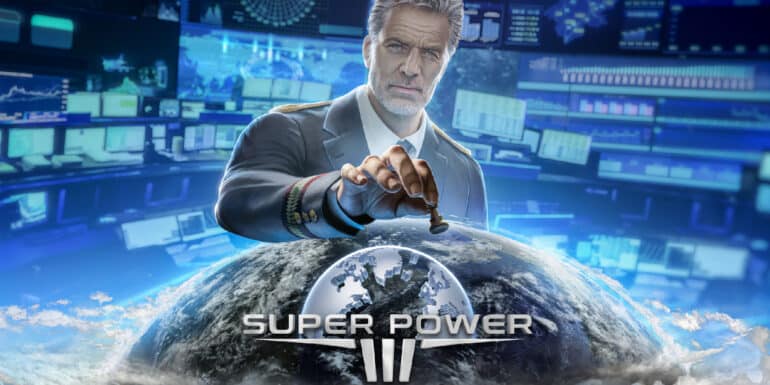 It’s almost fitting that the Superpower franchise would return at a time when the real world is in a state of conflict and instability. I’m sure almost anyone, regardless of political viewpoint, could turn on the TV, flip to a news channel and say, “you know what, I think I could do a better job than whoever is in charge right now.”

Well, that’s what Superpower 3 is here to let you do: choose a country, take command, and maybe even take over the world. Except it’s less of a game and more of a glorified Excel spreadsheet with little that makes me want to return to it regularly.

Superpower 3 is challenging to pin down because it’s not much of a game at all. It’s a simulation with some strategy elements tossed in. The game opens with players choosing one of sixteen scenarios grounded in real-life issues and geopolitical situations. These can range from general topics like the USA vs. North Korea to a hypothetical World War 3 situation or even a more specific problem like the Burmese dictatorship scenario. Each scenario always allows players to choose which country they would like to take the role of with specific objectives leading to a successful campaign or failure conditions.

Once players decide what scenario and country they would like to play, they can create their own custom character that acts as the head of that country. This is a rather strange part of the game because Superpower 3 tells you early on that the race players choose and even how they dress will affect how the population perceives you and you’re electability.

So, basically, there is baked-in racism in the game, which certainly is realistic in terms of real-world problems but can definitely kill the self-insert fantasy at times if you’re not the preferred race of the country you choose to play as. Either way, it’s time to jump into the game and see its first significant problem; there is no tutorial.

There are no onboarding elements to Superpower 3. It’s kind of baffling how the game just tosses you to the wolves with literally no tutorial campaign or any sort of guidance at all. A little book icon in the top right corner currently only leads to an empty Fandom page that I’m assuming will explain how to play the game when the community gets its hands on it.

So, for the first few hours of Superpower 3, I mostly clicked around the clunky UI, trying my hardest to figure out what everything meant. The game is filled with sliders, tabs, and buttons to press with little context or explanation for them, making the learning curve of Superpower 3 super high.

Eventually, I found that there are all sorts of economic and political factors that you can manipulate. For example, increasing the production of a given financial resource requires increased funding for infrastructure, privatizing or legalizing resources, lowering or raising taxes, and real-world hoop-jumping that gets things done. For all the difficulty it takes to get things done on the home turf, manipulating other countries is a walk in the park.

Getting countries to favor you often involves creating an embassy and signing a few treaties for human development and cultural exchange. If all else fails, just hand the other country money to boost your approval, and you’re good to go. The consequences of these actions are never really felt because, in multiple scenarios, I finished my goals before the game progressed enough to show me what happened after I gave India 500 billion dollars in aid.

Almost everything in the game is pretty easy to manipulate, and it’s hard to feel good about the decisions you make because everything just boils down to moving a slider and waiting for a separate number to go up.

In games like Crusader Kings–which also take a top-down view where you manipulate elements of your kingdom like taxes, production, and all sorts of economic factors–at least I can have fun with the emergent storylines that happen as global events occur and things happen to me in the driver’s seat. In Superpower 3, international events occur as little snippets on the bottom of the screen that can be easily missed if you’re not paying attention. And it never feels like they matter much anyways.

There also exists a rather budget feeling to Superpower 3. The loop of background music can get quite annoying at times as the music isn’t very subtle and abruptly changes tracks during gameplay, making for a distracting auditory experience in the midst of concentration. Also, the UI uses some very basic typefaces, and the world map isn’t very pretty to look at. The game just looks very sterile most of the time.

Superpower 3 technically can go on forever–there is no end to the game–which makes the game very replayable for anyone interested in having a sim running 24/7, but otherwise, it can never hold interest for longer than half an hour or so. Ultimately, I had to ask myself, “is this fun?” and the answer was mostly a no.

At the end of the day, Superpower 3 is a very niche game that isn’t a game at all. It’s a simulation for someone who just wants to live out some sort of power fantasy based in the real world and can enjoy the novelty of real-life data being used for gameplay purposes. Otherwise, many other strategy and simulation games offer more joy and satisfaction than Superpower 3, which often feels like clicking sliders and manipulating numbers on a spreadsheet just to check a box off for victory.

Superpower 3 – Review
Score Definition
We want to emphasize that 5 will always be the “average” number, not 7. So by far, it’s 50% great and it’s also 50% bad.
Pros
Interesting premise using real-world data for gameplay.
Cons
No onboarding options, extremely intimidating for new players.
Scattered, clunky UI.
Not very rewarding to play, feels like you do stuff just to complete a checklist.
5
Average