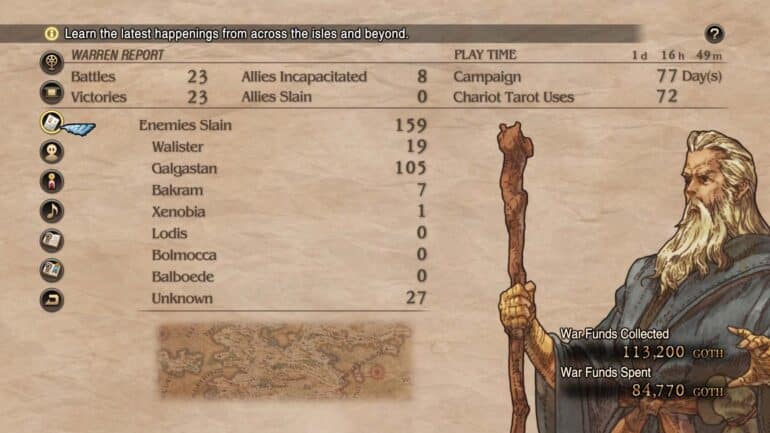 The new details discussed The Warren Report which is a feature that will record the players’ deeds in Valeria. It will contain the profiles of characters they will meet and news of what has happened throughout the land. It will reveal useful information about the game and how to play and will be shown in a database format.

This feature will also have event scenes that cannot be found anywhere else. Read information in The Warren Report and players can unlock new locations to visit. It is important to visit this page as much as possible.

One of the unlockables is the challenges that offer tons of interesting content outside the main story. There are many locations of the main story path that is set aside exclusively for the sheer fun of battle. If players win these battles, they can unlock new stages that will appear on the map which will delve even deeper into the challenge. Some of the paths can branch and depend on the route that players take, the enemies and treasure will change. They can also recruit faeries, ghosts, and dragons into the party from these challenges.

Here are a few of the Challenge Locations to check out:

This area is a vast forest with challenging terrain and is known as a breeding ground for various wild and strange beasts. Enemies with classes that are not available yet for players in the early stages can be found here, so this would be the best place to find new recruits.

Palace of the Dead

The Palace of the Dead is a place filled with powerful enemies and can only be unlocked by meeting certain conditions. Players must be well-prepared before entering its depths. There was an evil mage in the past that entered its depths to look for power but no one has ever returned ever since. It has its secrets down below, but the areas that you conquer will offer powerful items and spells.

In this graveyard, a lot of shipwrecks that had been adrift on the ocean currents gathered here. There are some reports of ghost sightings and misshapen creatures here. Many groups of pirates have tried their luck here to find some treasure but no one has returned.

Players will be able to find relics in these dungeons which have different properties from normal items. Combine relics with the same name in shops to upgrade various stats like attack type, element, and racial resistance. Stack the upgrades in order to take on more powerful enemies.

Skeleton – Skeletal warrior that got summoned from the world of darkness via necromancy. It can equip various weapons.

Ghost – Undead spirit that has no physical form that got summoned from the world of darkness via necromancy.

Lich – Mages from the world of darkness that have transcended death. They can use various high-level magic and abilities.

Golems – Manmade creatures that are constructed from materials like clay and stone. They were guardians originally but now they answer to no master.

Dragon – Large lizard-like creatures with iron-hard scales. It can use its mighty tails and breath to destroy armies.

Gryphon – Magical beast with the body of a lion and wings and head of an eagle. It can fly high in the wind. Rough terrain and elevation differences have no effect on them.