Tales of Arise Guide: How to Defeat the Mantis in the Sandinus Ravine

Here is how you defeat The Mantis. 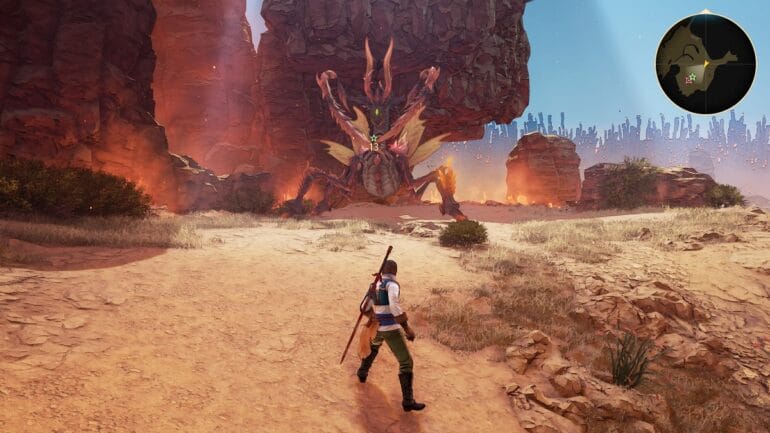 Tales of Arise is set in a world that’s filled with danger and malice. As the player, you will get the chance to fight a myriad of powerful enemies. Whether they’re towering Zeugles or Renans with mind-blowing Astral Arte abilities, these foes will surely give you a run for your money.

One of those foes is the humungous Mantis in the Sandinus Ravine area. This monster will immediately catch your eyes when you meet it for the first time very early in the game. For those who are keen on facing these massive Zeugles and completing the Giant Zeugle sub quest, this is how you can defeat the Mantis in the Sandinus Ravine as part of our Tales of Arise guide.

Things to Remember Before Fighting the Mantis

First things first, you won’t be able to defeat this boss when you meet it for the first time. Its stats at level 43 and a 219,150 HP are way too overwhelming for you this early in the game. If you’re immensely skilled and patient enough, perhaps, you can defeat the Mantis at level 5 to 10. If you’re like the rest of us, however, wait until you’re at least level 35 before fighting this boss to get a chance of beating it.

The Mantis is weak against Air elemental Astral Artes. On the other hand, it is resistant to Earth Astral Artes. With that said, it will serve you well to most use Air type attacks. For example, for Alphen, prioritize using Artes such as the Orochi Galeforce Fury and Severing Wind. Do this with every other character.

Its main weak point is located on its left foreleg. Be sure to focus most of your attacks here. You’ll be able to knock the Mantis down for a few seconds by attacking its weak point constantly.

Movements and Attacks to Watch Out For

Here are this enemy’s movesets you should always watch out for and how to avoid and counter them:

Forward Swipe – The Mantis will use its forelegs to swipe at you. Although the Mantis mostly does just one attack, it will also occasionally do two consecutive attacks, one from each foreleg, especially after you’ve depleted two of its health bars. You’ll know when the Mantis is about to do this attack when it raises one of its forearms in the air. It will stay up for a second before it finally does its swipe attack. When it does, dodge away to safety. If you can time it properly, you can also use this opportunity to perform a Perfect Evade and land a powerful counterattack.

Charge – The Mantis telegraphs this attack by raising the front of its body once. After it does this, it will perform a forward charge attack. You can halt this attack by using Kisara’s Boost Attack.

Slam Attack – This is when the Mantis raises both of its forelegs in the air, keeping it there for about one to two seconds, and slams them on the ground with sheer force. As soon as you see both forelegs up in the air, move away or to its side.

Summons – After you’ve depleted two of the Mantis’s health bars, it will summon four to five bees to fight alongside it. It is better that you focus on the Mantis instead of its summons as they’re rarely a nuisance during the fight. The other characters will attack them instead whenever the bees get too close to them.

Other Things to Keep In Mind To Win The Fight

In a nutshell, the Mantis boss fight is more of a battle of endurance and patience. This boss has massive health and its attacks hit like a truck. Know when to keep attacking it and when to move away.

While fighting, do not use Kisara’s Boost Attack for simple damage output. Instead, conserve it for when the Mantis is going to do its Charge attack.

Have both Shionne and Dohalim in your party so they can heal you and everyone else. It is also recommended that you have Rinwell as the fourth party member so you can utilize her Air Astral Artes.

Just keep on using Air Astral Artes on him, focus on its weak point, use Boost Attacks, heal up, keep your CP up, and you should be able to win this fight with ease. For defeating the Mantis, you will be rewarded with one Astral Flower and a Mantis Claw.