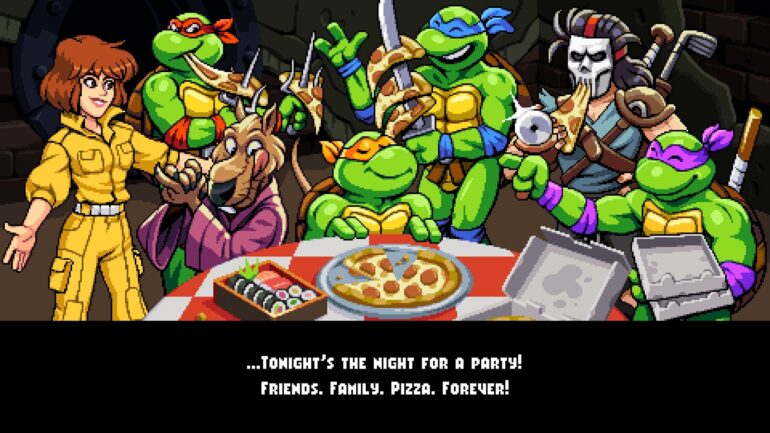 Whaddup, gamers? Ya boy’s back with a new review, and this time it’s on Teenage Mutant Ninja Turtles Shredder’s Revenge. Developed by Tribute Games Inc. and published by Dotemu and Gamera Games, this bodacious game is a love letter to both fans of the ’87 cartoon and the Konami beat-em-ups of old like Turtles in Time for both the Arcade and the Super NES and Hyperstone Heist on the Sega Genesis, and I freakin’ LOVE how this game turned out.

With fluid gameplay, radical music that knocked the proverbial socks off me, and the story which felt like a feature-length ’87 Turtles cartoon movie with how climactic the final boss battle IS, TMNT Shredder’s Revenge is such a charmer!

Let me tell you right off the bat, the gameplay is ASTOUNDINGLY fluid. Each playable character (6 to begin with, 7 if you count the unlockable Casey Jones after finishing your first run) plays according to their stats (and I’m either Raph or Casey, depending on the situation) really well, making multiple runs of each stage and finding which one suits what stage quite fun and not at all tedious. The progression is well-paced and the goalposts are not unevenly spaced in between, which makes reaching them feel all the more rewarding, like a nice cup of coffee or getting an extra can of soda from the vending machine.

The combo system is set to a dial one, but if you get to know how to deviate and make your own combos even with its simplistic style, you can DEVASTATE entire stages and clear them fast, especially the tougher enemies such as bosses while on Radical Mode, which boosts your strength and speed for a limited time, but more than enough to severely damage the stage boss if done just right, which is super helpful if you’re trying to beat your own time.

The soundtrack is AMAZING, from the start of the game with that first riff on the Turtles’ theme to the stages which underline, bolden, and italicize in ALL CAPS the fun and the tension of each stage as you play through, giving you a good enjoyable time on each and every one of them. The throwback to some of the soundtracks to the earlier beat-em-ups is enjoyable and is probably on par with at least Turtles in Time, which for me, this game deserves at least to get an old 16-bit soundtrack treatment just to get that vibe just much more of a kick, personally at least.

The boss themes really put you in the focus the likes that are comparable with fighting Pizzaface from the end of Splatterhouse 1 or Gomeramos King from Contra, that kind of laser-focused, that blood-pumping, no-blinking, sweat just sliding down your forehead, the whole shebang.

The story is at least an ’87 feature-length cartoon movie or its own special season at its best. The pacing, the voice, and the returning cast from all throughout just make it feel so much more special, and the characters stick true to their personalities which makes me grin from ear to ear like an idiot every single time I use the taunts to fill the meters up mid-game before an encounter just to make sure I beat it fast enough to beat my earlier time.

The combo system, as mentioned earlier, plays just as smooth if not better than the Konami titles considering the ways you could learn how to defeat the Foot Clan in more ways than one.

The boss battles are challenging but if you’re a vet of the earlier titles, reading their patterns and kicking them around would be quite a fun task to do, which serves to cap off the stages nicely and wrap it up in a ribbon, ever onward to completing the game and the side missions which give off quite the hefty sum of points which help you to boost your character of choice up, or choose to leave the rewards unclaimed so as to use it later to power someone else up pretty fast, easily giving them a leg up to face the challenges way easier considering the length of the game.

Overall, TMNT: Shredder’s Revenge is an amazing game with a lot of replayability ahead with its three difficulties, both Story and Arcade mode, the plethora of enemies and bosses, and the hilarity and action which will keep you glued to your chair and play as long as you could. In the immortal words of the great Joe Bob Briggs, 4 and a half stars! Check it out! 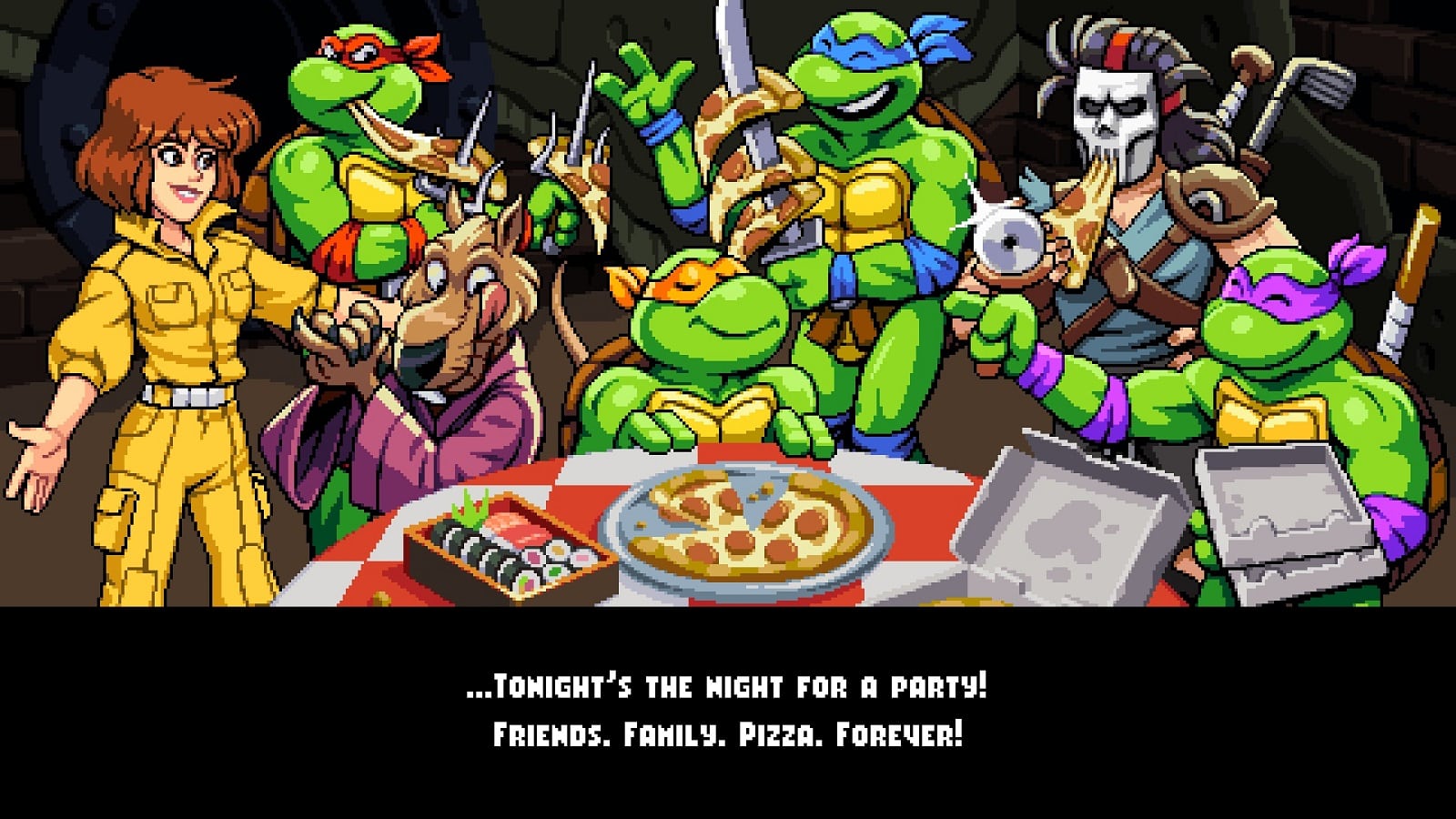 Teenage Mutant Ninja Turtles Shredder’s Revenge – Review
Score Definition
When the issues of a game are rolled and stomped by its greatness, then it’s something to invest on if you have some spare.
Pros
The gameplay is smooth, combo system is simple but can be expanded on, and it plays really well.
An unlockable character without resorting to DLC? YES.
The soundtrack is one of the best so far, but if there will be a 16-bit repackaging DLC, I'd buy it in a heartbeat.
Cons
Leveling might feel slow for some.
The "Clear the stage without getting harmed" challenge. I get that it's doable, though multitple runs will be had to get the patterns down.
The first stage might be a bit daunting to some.
8.5
Great