It's a puzzle solver... with some heart. 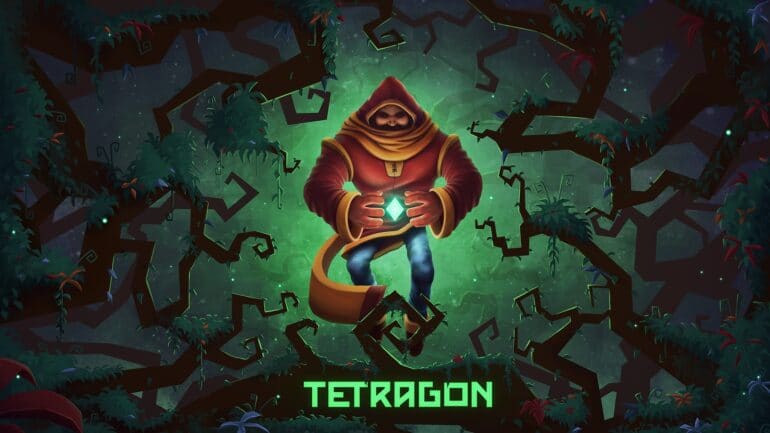 Tetragon is more than just a puzzle game involving movable level elements and shifting gravitational forces, it is a story about a father looking for his lost son and getting him back home, no matter what. Tetragon is a 2D puzzle game set within the confines of a mysterious square-like world. Players take control Lucios, a lumberjack, and more importantly, a father to a young boy.

The demo starts with Lucios doing lumberjack things. His son, feeling bored, went into the woods in search of something to do. Some time later, Lucios notices that his boy has gone missing. He stumbles upon a mysterious portal that he’s never seen before. Without any hesitation, he jumps into the portal as if he knows deep down that his boy is somewhere, in there. And thus begins the search for his boy.

There are 11 levels available in demo. The first few levels are easy enough to pass with little effort. These are essentially the tutorial levels and the set up for the overarching story of the game. The objective of each level is to reach a portal located somewhere in the level. It’s gonna be up to the player to figure out a route to said portal.

The early levels establishes what Lucios can and cannot do. In this case, he can only climb a maximum of 2 blocks high and that he cannot survive a fall more than 3 blocks deep. By the midway point of the demo, you’re ready to change the world… literally.

About 4-5 levels in, the game introduces an object that contains a fragment of TetraGen. The lore stuff, you can take note for next time. What is important right now, is the fact that this lantern-like object gives you the ability to move tower blocks around. By pressing the R1 and L1 buttons, you can cycle between all the stone tower-like objects and change their positions to suit your needs. You can change the world to give yourself a landing platform, or create a set of stairs to reach higher places on the other side of the square.

Soon after, the game start adding in pedestal looking devices. Interacting with them will allow you to change the orientation of the world by 90 degrees. This is accomplished by interacting with a pedestal and holding the L2 and R2 buttons to move the square. What I like about this is that the movement isn’t complete until it goes the full 90 degrees. It gives you the time to see if you did the correct move without guessing if Lucios can survive the transition.

As you can imagine, manipulating the world does come with some limitations. Most notably is the fact that you can’t move a tower that you’re currently on, unless you’re on it diagonally. There is also a limit indicating how far you can move towers. I believe it’s for the sake of maintaining an optimal way of solving puzzles. The same also applies to the pedestals, some only allow for the world to change in one direction, while others allow you change it from left or right.

Near the end of the demo, we find out that Lucios’ son is being held captive in a castle beyond the woods. We are made aware that we are getting close on account of the sudden appearance of banners. It’s also where the demo starts to get some-what challenging. In this part, we are supposed to align the symbols to their counterparts in the background. It didn’t take me long to figure what the right orientation is. What took the most time was setting the right path so that Lucios won’t fall to his doom. Eventually, I managed to carefully navigate the level while shifting the level at the right angle. Once that was handled, I simply moved the towers until they all fell into place.

And that was it for the demo. It ends with a scene where a ghostly figure of the boy asking Lucios if he’s coming for him.

Developer Cafundo Creative Studio created the beginnings of a brain teaser that’ll leave many heads a scratching, though a charming one at that. I must admit, I had fun planning out my next move as committing to a change is usually irreversible. Thankfully, I didn’t feel as though making mistakes comes with penalties other than losing seconds off of a timer. My only complaint at the moment is that there is no option to see which commands are which on keyboard. I literally didn’t know what key to press to cycle through the towers. I had to use a controller because I didn’t know how else to progress otherwise.

Regardless, I look forward to seeing how this game expands on the ideas presented in the demo when it releases later next month. The story bits and the ghostly messages the son left had also left me curious about the story, and how it’ll play out. Here’s to hoping it to be equal parts charming and challenging.