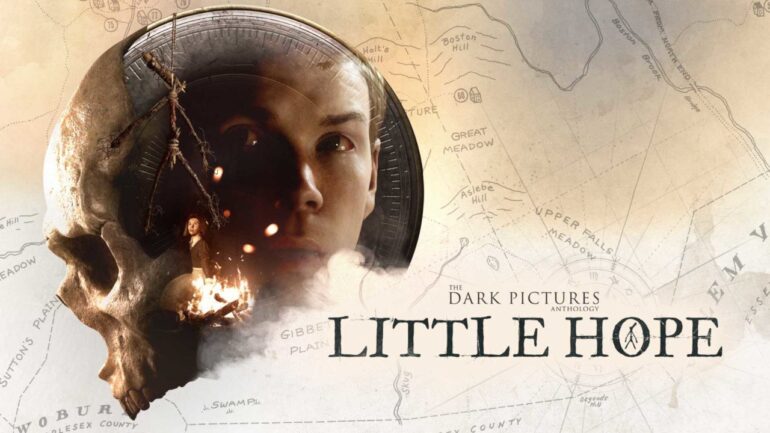 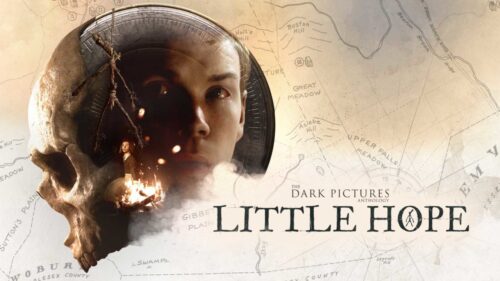 There couldn’t be a more fitting name for Little Hope than Little Hope. This isn’t to say that the game is hopeless in terms of quality. There is very little hope for those in-game in terms of survival. These poor souls are trapped in a nightmare that is discombobulating and dreadful, with nothing, not even hope, to help get them out of it.

Little Hope is an interactive horror-drama video game made by Supermassive Games. It is the second entry to Dark Pictures Anthology, a planned series of eight installments the studio is developing alongside Bandai Namco Entertainment.

It is safe to say that Supermassive Games have mastered the “Butterfly Effect” formula at this point. Little Hope is a game that incorporates this mechanic to astounding effect, where a previous choice ultimately pays off later on, for better or worse.

The way the story weaves around this mechanic is smooth and decent, to say the least. When the butterfly effect is done well in an interactive drama video game, it will force the players to really think their moves and choices through, as every single choice can literally have an impactful consequence later on. While this mechanic is not as intense in Little Hope as it was in Until Dawn, a prior game made by the same studio, its effects can still be either heartbreaking or satisfying.

You, the player, will completely be responsible for many of the circumstances in the game, which is, at its core, what a game that uses the “butterfly effect” is all about. The game occasionally does its job well of making you feel this. I say “occasionally” because, at certain points, the game will not give you enough time to take in what just happened, at said certain moments where a tragedy does indeed happen.

At certain points, the game will end a cutscene abruptly and throw you back into the game without making you dwell on the tragedy you know you could have avoided if you did a few things differently, which is a shame. This can be chalked up to poor editing, but we’ll get to that in a moment.

At times where the game does let you sit and make you feel certain moments, man oh man are those moments impactful. These scenes can often be gruesome and awful and you’ll just sit there thinking, “huh, I could have avoided that.” This is where the game really shines. It will make you want to replay that chapter, or just replay the game overall. It’s the part of the game that gives you the impression of being the puppet master. It will make you feel like you’re somehow the author of this narrative, that you’re not just reading it.

Once you reach the end, though, you’ll know you’re not. You’re not the master of this story. There is as little hope for you as there is for the characters in the game.

A game that heavily relies on the “butterfly effect” mechanic needs a proper story to lay it all out on for the mechanic to really work. With this in mind, I’m going to have to say that the story of Little Hope is nothing short of phenomenal.

Little Hope tells the story of Andrew, a student who gets trapped in a Silent Hill-like ghost town called Little Hope along with his classmates and their professor after their bus crashes in the middle of the road. From the beginning, though, the story of Little Hope is fueled with mysteries and questions. The prologue of the game presents a somewhat younger version of Andrew in his adopted-family home, where everyone except for him tragically dies in a horrible house fire accident.

Players will immediately realize that Andrew’s family members and his school acquaintances look exactly alike. His father resembles his professor, his mother resembles the mature student, and his siblings resemble his classmates. As you progress further into the story, your questions will be met with even more questions, and they’ll just pile up and pile up until you finally reach an ending that’s as shocking as its prologue.

For the most part, you, as the player, will have to do a lot of sitting, watching, and listening, instead of actually playing. This may bother a few people, but it did not bother me in the slightest for two reasons. One, the story, as I already mentioned, is fantastic. I was totally engaged in the story this game was telling. It’s mysterious, tense, interesting, and well-acted. Second, the writing in this game is astounding.

Little Hope is written by Dario Poloni and he did a wonderful job writing the screenplay for this game. The dialogue is far from cheesy and the texts you read are well-thought-out. Writing in games is something that’s not often praised, which is such a massive shame for these writers, and I believe Dario Poloni deserves to be recognized for his work here. The writing is absolutely brilliant.

The actors did a wonderful job as well. The main character is played by Will Poulter. You may know him from movies such as The Chronicles of Narnia: The Voyage of the Dawn Treader, We’re The Millers, Maze Runner: The Death Cure, and many more. Will Poulter did the voice and motion capture for the main protagonist and his performance is wonderful. The rest of the cast did a wonderful job as well. Each of these actors and actresses had to do multiple roles and voices in this game and they just knocked it out of the park.

When you’re not sitting and watching the story that’s being presented to you, you’re moving around in this ugly town of Little Hope. For this to be a game, after all, there has to be actual gameplay. Aside from the butterfly effect mechanic, the game keeps you engaged by using quick-time events and the plain old “moving around and discovering items” gameplay.

First of all, the movement. The controls of this game are FAR from perfect. It’s clunky at best and broken at worst. The response time from pressing the button or pushing a stick forward has a noticeable delay, which is very, very off-putting. This is even more frustrating in narrow areas where you’ll have to move around to search for things that will help you get a better sense of the world or to drive the story forward. There is also a couple of action prompts that are tough to engage, like for you to interact with a certain thing, you’ll have to stand at the exact correct spot, or else the game won’t acknowledge the prompt.

Camera cuts are also a little bit odd in this game. The way one scene cuts into another just feels… off a lot of times. This is perhaps due to there being many scenes that belong in a specific moment and the scene that’s placed is based on a decision a player makes, that’s why a lot of times, these scenes don’t mix well together in terms of framing and movement.

Thankfully, the same can’t be said for the quick-time events.

Quick-time events are often hit-or-miss in many games. Many players also hate them, while some don’t mind them so much. I, for one, don’t mind them for as long as they’re done well. The QTE in Little Hope isn’t so bad at all. I’ve never been so “on the edge” with just playing a game where I only have to press a few buttons at a time. This can once again be attributed to the story and the butterfly effect mechanic where, if you make a mistake, the consequences will be brutal and it will all be your fault and no one else’s.

Little Hope, at its core, is a bonafide horror game. It has obvious nods and gathers inspiration from horror movies and games such as The Blair Witch Project, Silent Hill, and The Omen. This game is indeed scary at times. However, this game uses a horror movie trope that is so overused and so cheap that there is nothing else in the world I hate more. …okay, that’s an exaggeration, but I really, really hate cheap jump scares.

This game, or games made by Supermassive Games for that matter, love their jump scares. It was the same with Man of Medan and Until Dawn, though Until Dawn was made to honor horror movie tropes, man this game overdoes it. It becomes predictable too. When the camera pans down as the character looks down, you know something will be there to jump at you once the camera pans up, or when there’s a massive empty space the camera points toward, it’s done so just something can jump at you.

I can go on and on about how much this game uses jump scares to “scare” its players. It goes on to a point that it becomes annoying and cheap instead of scary and well-earned. Jump scares are the horror equivalent of a comedy show’s laughing track. Laughing tracks are placed to “encourage” viewers to laugh alongside everybody as if to say “hey, this joke is funny. LAUGH AT IT.”

Don’t get me wrong. Jump scares are almost a requirement when it comes to horror media, but there’s a proper way to do it, correct moments to put it in, and an acceptable number of times you should do it. Doing it too much is almost insulting. It’s kind of like you don’t trust your game to be scary enough, so you insult your players by intentionally placing jump scares everywhere so you can have your scare factor. It’s cheap, it’s unwanted, it’s awful.

The ending of this game is definitely a twist, and good plot twists need to have bread crumbs along the way that point to it being sensible, and I have to say the ending of Little Hope is incredibly well done. I almost had no idea that’s what they were going for, but as soon as they revealed it, I knew it made sense. It just had to. It’s not ludicrous or rushed. It’s the type of twist you’ll agree is the perfect ending despite not entirely knowing how you got there.

I liked this game. More specifically, I liked the story. I loved the writing. This game kept me engaged. While I acknowledge that it can be better, I also know that Supermassive Games knows what they’re doing and I, for one, cannot wait for the next installment of The Dark Pictures Anthology.

Little Hope shines a glimmer of hope despite being far from perfect. It has moments that make it stand out, and moments that will make you dislike it. If you care for storytelling, writing, and engagement, you will love this game for sure. Its gameplay is… not the best in its genre. It has clunky and broken moments, but it most certainly tries to be the best version it can be. 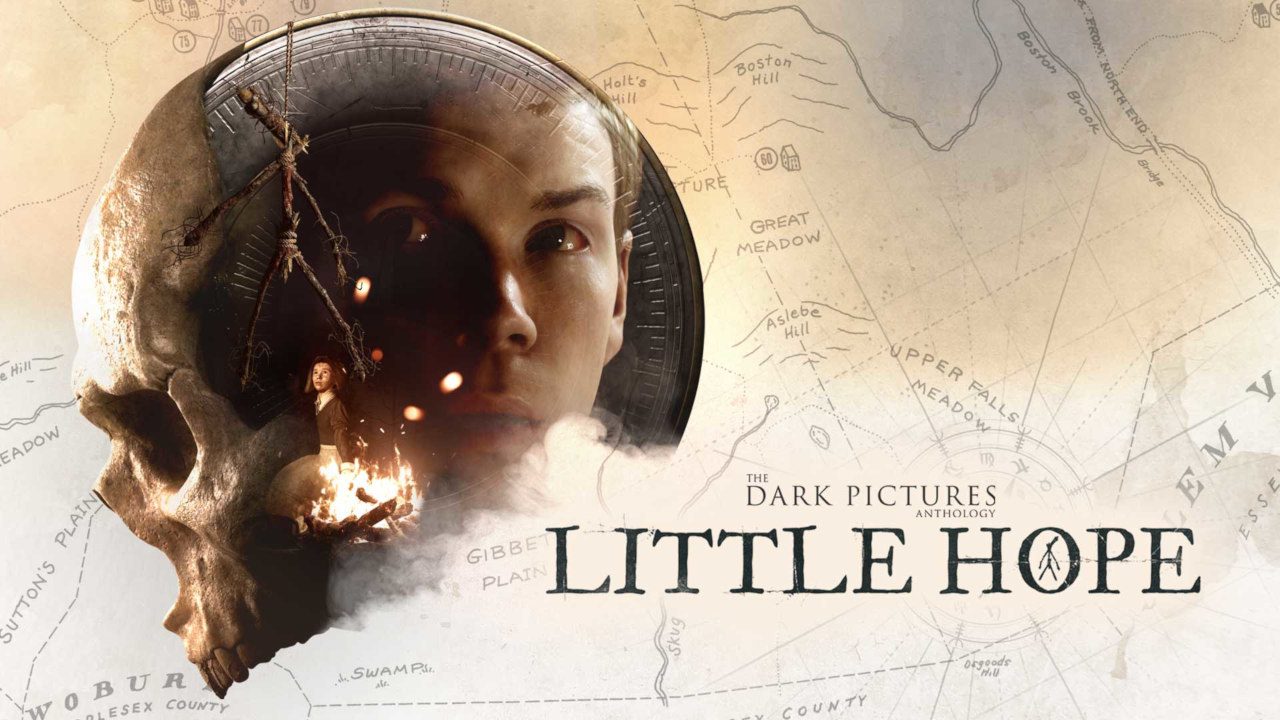 The Dark Pictures Anthology: Little Hope – Review
Score Definition
We tell you, it’s a good game! It’s not average! It might have some problems here and there, but you have to admit it is a “Good” game.
Pros
Great story, with an amazing ending
Very well-written
Awesome cast
QTEs were done well
The "butterfly effect" mechanic was decent
Cons
Too.Many.Jumpscares
Controls are clunky
Camera cuts are awkward
7
Good