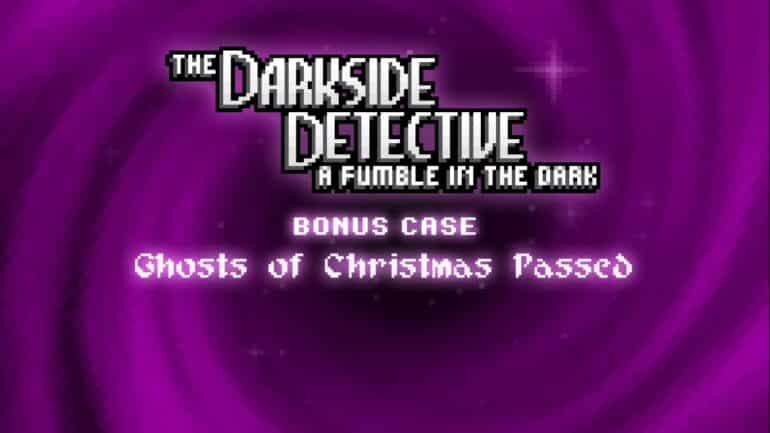 Developer Developer Spooky Doorway has announced that they have released the first of three new bonus cases for their game, The Darkside Detective A Fumble in the Dark. A follow-up to 2017’s Darkside Detective, the latest entry was first revealed during the Indie Houses event in August.

“Ghosts of Christmas Passed is something we’ve been thinking about since we released the previous Christmas case, Buy Hard. That let us seed in a teeny bit of foreshadowing through A Fumble in the Dark, something unique to our format that we think is a wee treat for eagle-eyed players. It has everything: characters, art, noises, words – I think we might even have included a ghost?” says Dave Mccabe, Writer

The Darkside Detective: A Fumble in the Dark is a serial adventure game where players aid a duo of investigators crack the supernatural cases and puzzles plaguing their city of Twin Lakes. Whether it be a noise complaint due to ritual-performing neighbors or perhaps Mothman keeps loitering around your porchlight at night, McQueen and Dooley are just a text-box away!

• 6 unique cases, the likes of which you’ve never seen before. (not a guarantee)
• Uses both pointing and clicking technology.
• Music from Thomas O’Boyle, a totally-living composer, definitely not undead.
• Photo-Realistic* Pixel Rendering. (*Depends on your definition of photo-realism)
• 1 mail-in rebate per customer on exorcism services for hauntings resulting from play.
• A brief recap of the events of “The Darkside Detective” for anyone who hasn’t played it and doesn’t want to.

The Darkside Detective is available now on PlayStation 4, Xbox One, Nintendo Switch, and PC (via Steam).