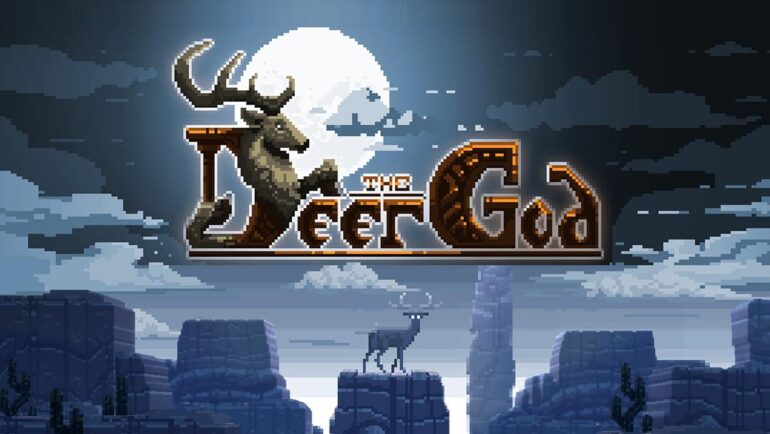 Exploring the wild is one of dreams since I was a kid. Observing how nature works and being part of it has always intrigued me. And by being part of it, I meant becoming a ferocious beast. The Deer God is the game that gave me the chance to venture the wild. Though being a deer is not exactly what I wanted to become but its majestic mysteries has kept me drawn in playing this game. 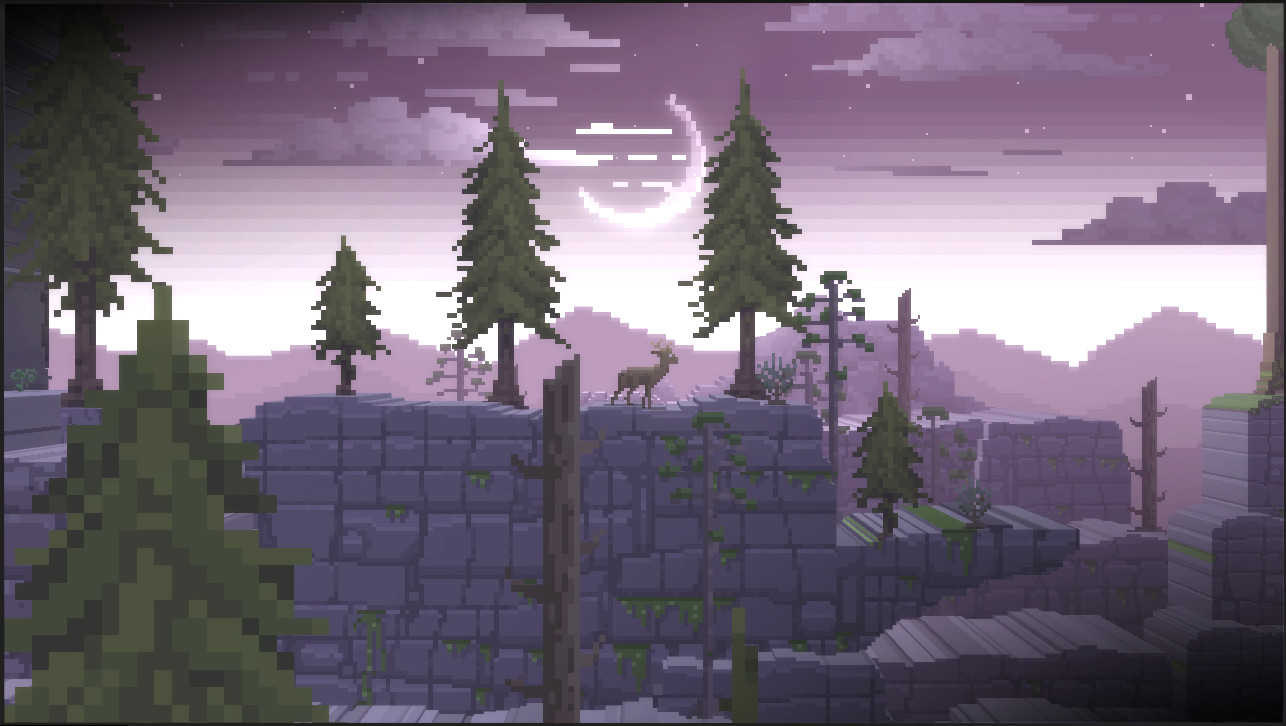 The Deer God starts off with the story of a hunter who was reincarnated as a deer. In a vast and detailed 3D pixel world the player will start as a weak fawn. This is where you will start scouting for food and nourishment while avoiding the dangers of the wild. Eating is essential for survival. If you cannot feed your deer, he will eventually die. The longer the deer lives, the faster and stronger he gets but, once you die, you will reincarnate again as a fawn. Tiring right? To avoid that kind of annoyance you need to keep an eye out for deer skulls. They will bring back the current dead deer to life but not as zombie if you are thinking that way. Producing an offspring will also give you extra life but, you need to find a doe first then mate. It would not work like the deer skulls, instead you will reincarnate as the offspring you made.

Running around the 3D pixel world with serene background music calms you down. Seeing how the day turns to night with different seasons was beautifully done. The game may have a peaceful scenery but its atmosphere seems a bit off which serves as the survival game purpose. What got me annoyed was the jumping from different terrains to another because some terrains were too small to land.

The land may be colorful but there are hidden paths in the game. These can be unlocked when you meet with various elder deer to gain knowledge and skills. To activate the skill, the deer must at least have antlers and the taller the antlers, the more skills you can achieve. The skills you acquire may differ depending on the karma of the character you defeated. 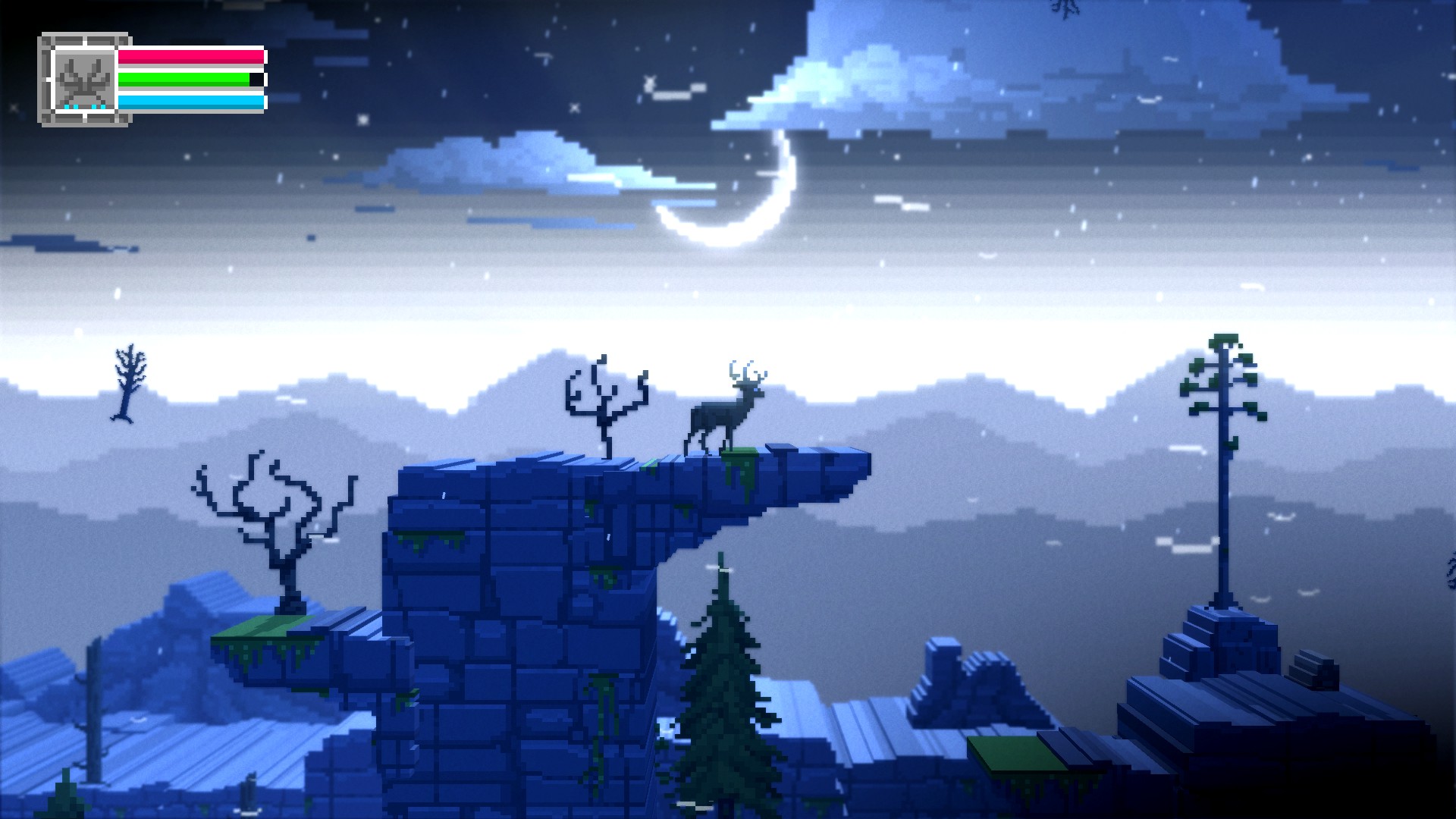 Defeating enemies means gaining good karma while killing innocent animals means gaining bad karma. Aside from gaining more skills, you can acquire items through scavenging around bushes, barrels and in hidden areas. Their purpose is mostly for combat and various timed power-ups for the deer. To be honest, I did not find most of it to be useful. The combat was just ramming or dashing to the enemy. It is not much of a challenge since you can easily avoid the fight by jumping over them. Though they will chase you but you can always outrun them and it is much easier than facing them. If you are looking for fun, you can try to outsmart the enemies by leading them to pits of spikes, burn them through forest fires or let them face bigger creatures.

The available difficulties are normal and hardcore. Normal auto-saves on discovered landmarks or when you receive quests. Those places will be the respawning point of the new fawn. Hardcore is where you get permanent death which will require you to save another file if you run out of lives. The difference between the difficulties was not also clear. I still find the enemies in hardcore too easy.

I did enjoy this game but the longer I played the more bored I get. Running and jumping from platforms was fun but seeing  the same platforms gets dull. There is a story line to get yourself entertained and if you want to finish the game. But the quests were not challenging as I expected. I had more difficulty in surviving than doing the quests. Which gave me the feeling that the game was more on how long you can survive and how far you can travel as a deer. The Deer God has actual potential to become a good game but it still lacks a lot of things for players who will expect too much.