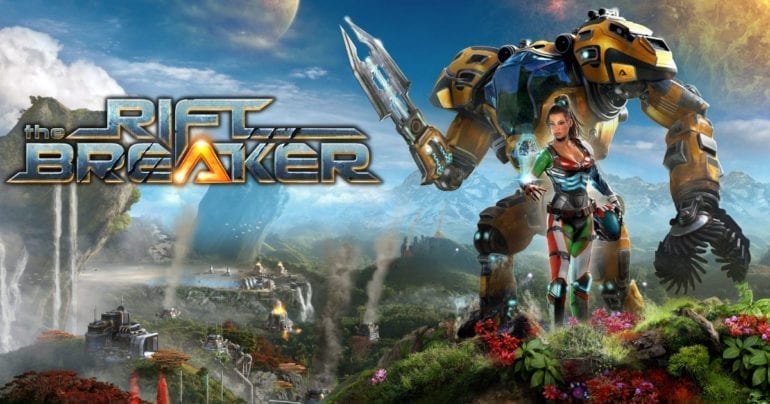 First off, EXOR Studios has officially announced the full game release window, which is this coming Autumn 2021. After the overwhelming positive response from the fans, they are motivated for its release this year and it is coming simultaneously on PC and consoles. They are also expanding where they are selling the game, which is coming to Epic Games Store. They have partnered with Maximum Games to release a physical disc of the game on PlayStation 5 and Xbox Series X/S with the PS4 and Xbox One versions at a later date.

The Riftbreaker mixes base-building, survival, exploration, and intense action on an exotic, alien planet. Learn more about the broad variety of skills and weapons that will be available in The Riftbreaker and get a glimpse at how intense the action really gets in today’s Weapons Trailer.
The latest trailer is also accompanied by a fresh pack of high-resolution screenshots. Of course, the developers haven’t forgotten about editors and content creators, and have prepared something for them, as well. A preview build under the code name “Alpha 5” is now ready and includes the dynamically generated Survival Mode unavailable in the free prologue.

A short sneak peek of what’s new in preview “Alpha 5”:

ABOUT THE RIFTBREAKER:
As Captain Ashley S. Nowak, “the Riftbreaker,” you enter a one-way portal to Galatea 37, a distant planet at the far reaches of the Milky Way. Your purpose is to build and develop a base that will allow travel to and from Earth for further colonization. Ashley’s Mecha-Suit, which she calls “Mr. Riggs,” can withstand the harshest environmental conditions and has a full range of equipment for base construction, resource extraction, specimen gathering, and of course – combat. It is also capable of traveling through rifts that connect space across vast distances.

• BASE BUILDING – Your task is to construct a two-way rift connected to Earth. This will be a very complex undertaking requiring enormous amounts of energy. Simple solar collectors and a few tons of steel will not be enough. You will need to build up an intricate chain of mines, refineries, power plants, and research facilities to complete this mission.
• EXPLORATION – Galatea 37 is an unknown planet in the Sycorax belt of the Milky Way galaxy. Remote surveys have detected that it is inhabitable and perfect for colonization. The planet is full of rare minerals and substances that can be found scattered across the globe. Various biomes will surprise you with unknown fauna and flora, as well as harsh weather conditions. Construct local outposts in resource-rich locations to transport the required resources using rift technology.
• DEFENSE – Your presence on this planet will not go unnoticed! As you build up your industry and disrupt the natural order, the planet will start to see you as a threat. Build up your defenses. Construct walls, barriers, and defense towers as the attacks get stronger with every passing day. You will face thousands of hostile creatures trying to eliminate your presence.
• HACK, SLASH, SHOOT – Mr. Riggs can be equipped with powerful weapons and abilities that will allow you to take on the largest of beasts. You will need to be ready to face lots of hostile alien creatures as you explore the planet.
• GATHER SAMPLES AND STRANGE ARTIFACTS – Felled beasts will drop valuable research specimens as well as rare resources. Use everything you can gather to research and craft new technologies, buildings, weapons, and equipment. You can also scout the terrain using your sensors and dig for treasure buried underground.
• RESEARCH – Use your gathered samples to research new technologies that will help you build up your base, improve your defenses, develop new blueprints for your Mecha-Suit, or improve existing technologies.
• CRAFT – Mr. Riggs is fully customizable and upgradeable. Use the blueprints that you’ve researched to craft new parts and weapons. Utilizing better materials in the crafting process will result in gear with improved properties. Each crafted item has unique properties.
• INTERACTIVE STREAMING – The Riftbreaker™ has built-in integration with all the most popular streaming services. The stream’s audience can actively participate in the game through multiple options, e.g., by voting to send waves of new enemies, donating resources, or spawning environmental disasters like a tornado.
• THE SCHMETTERLING ENGINE – This game is built using the latest iteration of EXOR Studios’ in-house developed Schmetterling 2.0 engine, which was previously used to create X-Morph: Defense™ and Zombie Driver™. We pride ourselves in delivering fluid gameplay and utilizing all your hardware’s capabilities: uncapped frame rate, support for widescreen monitors, customizable controls, and more.
• COMMUNITY-DRIVEN DEVELOPMENT – If you’ve already read everything up to this point, then you might be interested in helping us shape the game. Please get in touch with us via our official Discord server or any other of our social media channels. We’ll be sharing inside info about the progress of the game’s development, and we’d love to hear your feedback. Please come and help us make The Riftbreaker™ the game YOU want to play!

The Riftbreaker is currently under development and has an estimated release date – autumn 2021. The game is coming to PC, PS5 and Xbox Series X/S. The PlayStation 4 and Xbox One versions will be released at a later date.