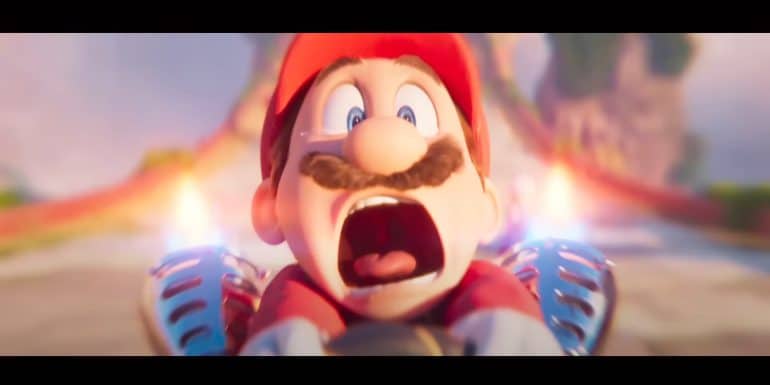 The second trailer was recently shown at a special Nintendo Direct. This clip reveals a lot of new content in the movie and it starts with Donkey Kong beating up Mario in a fight. It was so one-sided that Mario could not even land a punch when they clashed.

It was revealed before the reveal of the second trailer that Donkey Kong will be voiced by awesome comedian Seth Rogen. He said that he is a big fan of Miyamoto-san and the worlds he created. He even named his dog Zelda.

The trailer itself introduces the beginnings of Mario in this new world where he does not have the skills he has in the games. He trains with Princess Peach and Toad (Keegan-Michael Key) but does it miserably. Various other stuffs were also shown like Luigi getting kidnapped by Bowser who tortures him by pulling a nose hair (yikes), Peach preparing for war against Bowser who seemed to be ill-equipped, flying fish sucking out the life of Mario, Mario wearing the Squirrel suit, Peach demonstrating the power of the flower power up, and tons and tons of Yoshis stampeding. They also showed how Mario and Luigi got sucked into the plumbing system and what it actually looks like when they enter it.

Lastly, the trailer showed the most surprising content of all: Mario Kart! They even showed the Rainbow Road, a famous icon from this particular racing series. We also get to hear Chris Pratt do his impression of the Mario “Wahoo!”