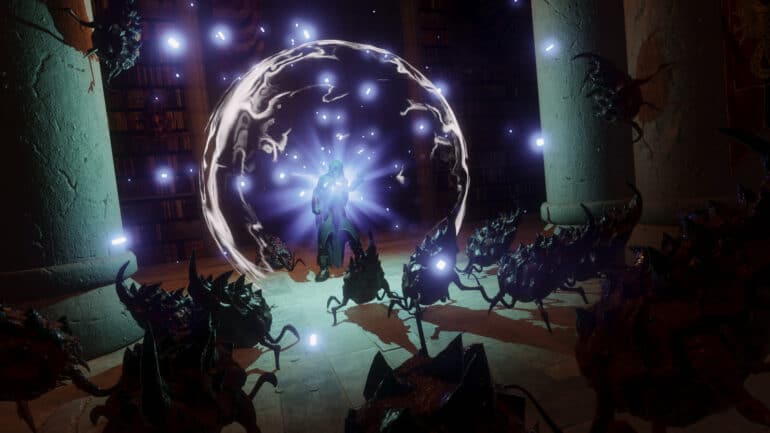 This new grand RPG will be set in an archipelago of over 100 islands, and made by former Elder Scrolls devs Julian LeFay and Ted Peterson. It will be realistically scaled and only known as the Archipelago. It will have many factions who are looking for many ways to gain influence and power.

Players can earn a position amongst the ranks of these factions, kingdoms, dynasties, and possibly making one of their own. They must first earn their right to these positions by battling monsters, spirits, mercenaries, and enemies that will swarm him. They will be venturing with a goal to gain more fame and fortune through strange lands, explore deep dungeons, and traverse through different kingdoms full of humans, elves, orks, dwarves, and many more races.

Here are the features to expect via Steam:

• A Massive World. No, really! Way bigger than most other games you can think of. Big cities with hundreds or thousands of NPCs, deep, dark, dangerous forests, gigantic mountain ranges, sprawling swamps and marshlands, vast oceans, and more, brought to life through dynamic, procedural generation.
• Constantly Evolving Experience and Story. A virtual Game Master keeps things interesting for you, making other characters and their factions react and plot their next move based on your actions, resulting in no two players having the exact same game experience. World events have very different effects in the life of a socializing aristocrat, a thief entrenched in underworld conspiracies, a scholar collecting ancient artifacts, or whatever role you craft for yourself.
• Real Role-Playing. You’re not playing some prebaked warrior or mage, but a character class of your design, with customized skills and abilities to craft your own spells, potions, and enchantments. Want to try playing a character who is really, really outside the box? We got you.
• A World Full of Lore. We call it Wayward Realms for a reason. On the surface, things may have that familiar, medieval fantasy look, but dig a bit deeper and there’s a lot to learn. From the multiple moons in the sky, to the libraries worth of books, to the multiple cultures of each race, there is always something new to discover.

The Wayward Realms, the new grand RPG, is currently in development.