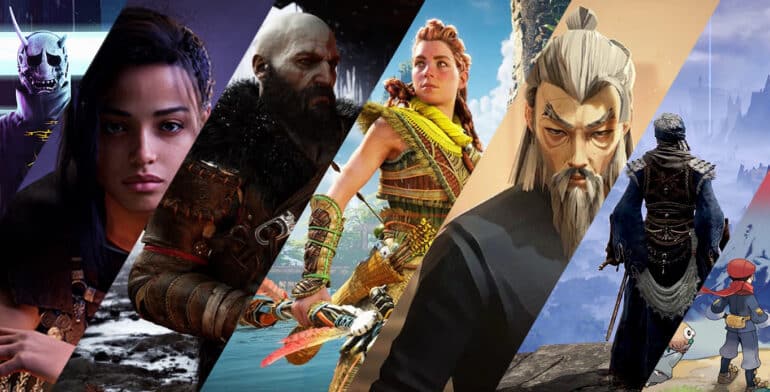 We’re almost in 2022! What better way to look forward to the coming year than taking a look at the most awaited games that will come out next year. Here’s a list of games that we would definitely love to get our hands on.

20 most anticipated games of 2022 on PlayStation, Xbox, and Switch

The Legend of Zelda: Breath of the Wild 2

Link is back in the land of Hyrule, but The Legend of Zelda: Breath of the Wild 2 looks slightly different in this sequel. This time, there will be a lot more verticality when it comes to exploration – and by a lot, we mean the sky is the limit. So far, since this is just a teaser, there are just a few things that can be said about what its story is going to be. Quite possibly, Ganon will be back, or it might also be another force of evil.

A Plague Tale: Requiem follows the story of Innocence where Amicia and her brother Hugo travels far south in hopes to start a new life and help Hugo control his curse. The peace seems to be short-lived as Hugo’s curse reawakens, causing death and destruction wherever they go. Also, more rats.

Sonic Frontiers is a very promising Sonic the Hedgehog game as it’s the franchise’s first game to feature open-world gameplay. Players will be zipping through the different biomes of the Starfall Islands while fighting powerful enemies along the way.

In Gotham Knights, after the loss of Batman, Gotham City fell into chaos. Players will be playing as Batman’s former partners: Nightwing, Batgirl, Robin, and Red Hood as they try to restore peace and justice throughout the streets of Gotham. They’ll eventually go up against the secret criminal society known as the Court of Owls, which will make their mission more complicated and deadly.

Starfield introduces itself as an action-roleplaying game set in space that aims to provide a new playing experience that is still bound to realism. Not much info has been out about its gameplay yet aside from being a grounded exploration game.

Redfall is a co-op FPS where you play as vampire slayers, each with their own unique abilities. You try to save the small town of Redfall from a legion of vampires that were born from a failed experiment, and you’d also have to deal with human cultists who worship their new leaders.

Ghostwire: Tokyo is set in the once busy city of Tokyo, players will have to fight supernatural entities, lead by an Occultist known as Hannya, with their newly-gained powers and try to solve the disappearance of Tokyo’s inhabitants.

In Stray, you play as a cat as you explore and make your way through the mysterious long-forgotten city. You’ll interact with the city’s humanoid inhabitants and meet friends along the way, as well as hostile creatures as you run, climb, and solve puzzles to uncover more secrets; all through the eyes of a stray cat.

Tiny Tina’s Wonderland gives a new spin on the world through its mythical theme and DnD vibes, while also introducing players to a large cast of quirky and memorable characters. Fans of the Borderlands franchise will have a whole different experience as they embark on an adventure through the magical world made by Tiny Tina.

Gran Turismo 7 will be bringing in more customization and tuning options, as well as new cars to drive, and new tracks to dominate. Fans of the Gran Turismo games will be excited to play this newest addition to the roster, especially that they will be experiencing massive graphics boosts on the PS5.

Dying Light 2 will have players face the nasty monstrosity created by a viral outbreak that was explored back in the first game. In this sequel, every choice that is made will have an effect on how the world is shaped, as aside from the monsters, you’ll be put in the middle of a three-way conflict between factions. Combat is also not limited; players have a choice to face enemies with brute force, be crafty and utilize different tools, or use agility and slip past the danger.

It’s back to the Zone as the S.T.A.L.K.E.R. franchise will be releasing its fourth game after almost thirteen years since Call of Pripyat on S.T.A.L.K.E.R. 2: Heart of Chernobyl. Players will once again have to go through the treacherous Zone that’s filled with mysterious artifacts, strange anomalies, and deadly mutated creatures.

Forspoken is an entirely new action RPG that follows the journey of Frey, who suddenly got transported into the world of Athia. Along the way, Frey has to learn and master her newfound magical abilities as she makes her way through Athia while fighting monstrous creatures so that she can find her way back home.

Sons of the Forest

The hit survival horror game The Forest is getting a sequel with Sons of the Forest, which looks like the players will be revisiting the same island from the first game, but will be focusing on a different test site. Not much has been given about the story of this sequel, however the last scene where the babies were being yeeted at a guy might give a clue to its continuity.

Another game that will be added in the long roster of Pokemon games, Pokemon Legends: Arceus will be set in the past Sinnoh, back when it was still known as Hisui. The game will be looking at some origins and will give the players an insight on how the Pokemon world was way before the time when Red made his first steps towards his journey in the first Pokemon games.

Sifu is a much-awaited beat ’em up action-adventure game that seems to have a unique mechanic. In Sifu, each time the protag gets fatally injured, he gets revived by a magic talisman. The twist is that he gets older after every resurrection and eventually dies once the magic of the talisman gets used up. Fans of the martial arts will surely love this game, as it teases smooth combat flow and high-impact action.

In God of War: Ragnarok, Kratos is back with his son Atreus as they find a way to stop the incoming ragnarok from happening and find the old god of war Tyr to seek answers about Atreus’ identity. They will have to make a journey through the nine realms, but not without any danger as they will have to face the wrath of Thor and Freya seeking vengeance for their sons.

Elden Ring may have been the most anticipated game in recent years based from the chatter it gets from all the players who are looking for it every time there’s a game event. Honestly, who can blame them, the game graphics looks awesome and the combat is highly engaging. Surely, this will become one of 2022’s biggest hits.

Aloy continues her journey in Horizon Forbidden West as she heads towards uncharted lands in search of the source of a mysterious plague that has been bringing death across the land. There will be new kinds of machines and enemies that Aloy will encounter throughout different types of terrain, plus the addition of underwater exploration and combat will definitely make things more challenging.

These are just some of the major game releases that we are ecstatic to play and enjoy. Have you made your list of games that you’ll be playing in 2022?