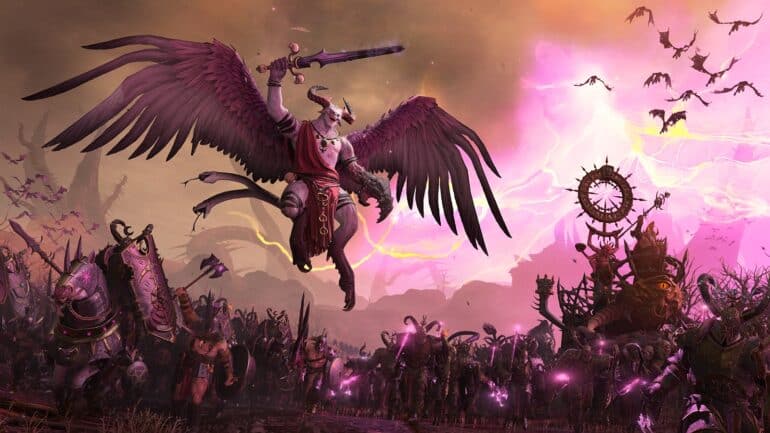 In this new DLC coming on August 23, 2022, four servants of the Chaos Gods are trying to gain supremacy to alter the balance of power between them forever. They will try to prove themselves worthy of the gods’ favor and their goal is to go to the ancient arena-city of Zanbaijin to acquire its arcane power.

Total War Warhammer III Champions of Chaos is the latest DLC for the game and it includes four new Warriors of Chaos Legendary Lords instead of the usual two. Each of these Warriors of Chaos are aligned with one of the four ruinous Chaos Gods. There will be new gameplay mechanics, over fifty new battlefield units, and free content like the world-spanning Immortal Empires campaign mode.

The first of the four new Chaos Legendary Lords is Azazel, Prince of Damnation. He is the bane of humanity since time immemorial and has makes constant acts of devotion and debauchery to attain a high standing with the Chaos God Slaanesh of excess and hedonism.

Champions of Chaos make their way to the ancient arena-city of Zambaijin to claim its powers. For millennia, servants of the Chaos Gods have clashed there and the souls of the fallen are sealed within the Altar of Battle. Claim it for your own and earn that power.

The new DLC introduces a lot of new battlefield units and that includes the Warshine of Chaos which bestows powers to those who make the appropriate sacrifice. Chaos Knights who ride as a wall of blades and spiked armor can crash through enemy ranks in an explosion of torn flesh. The Chose is ironclad group of elite slaughterers who form the inner circle of their lord’s warband.

Immortal Empires is the new grand-scale campaign mode and will be free to owners of all three Total War Warhammer games. It will be released in beta together with Champions of Chaos where it combines the landmasses, Legendary Lords, war units, and more from the trilogy into one colossal mode.

Blood for the Blood God III

This new pack will bring several mature-rated animations to the game like blood spurts, limb and head dismemberment, blood-drenched UI elements, global campaign events that generate greater carnage n battle, and more. It will be free to owners who have Blood for the Blood God I or II.