Three trailers are better one, right? 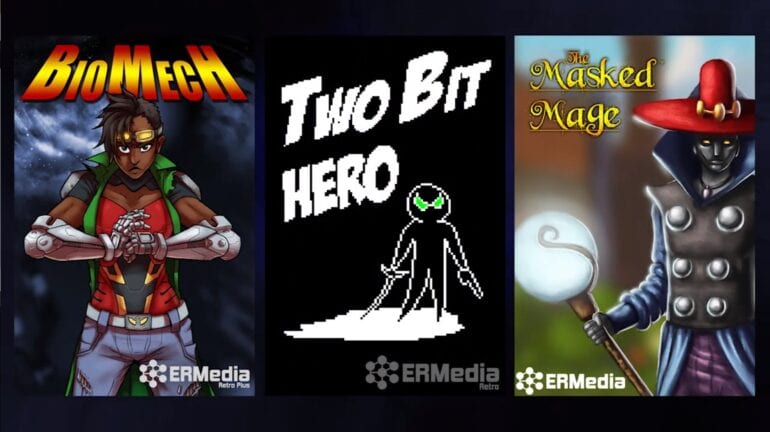 Two Bit Hero is a classic retro Metroidvania that sees you taking on the role of a young hero. Citizens have been trapped inside a skyscraper and you have to get in, power up, defeat the bad guys, save the people, and get out again.

But be careful when you encounter a glitch in reality, for it will transport you into a different reality altogether! But perhaps you can use that to your advantage?

BioMech is a traditional Metroid-like game with carefully structured gameplay. No rogue elements, no random content, everything is handcrafted and deliberately designed.

Based on the comic book of the same name, BioMech casts you as Tatiana Rocheva, a Russian soldier who served her country in Iraq. After being captured and tortured, she was outfitted with enhanced cybernetic limbs.

Now, Tatiana is being sent on her most dangerous mission yet.

Satellites picked up signals coming form an uninhabited area deep within the Siberian forest. Analysis suggests the presence of a secret weapons facility run by the enemy. No signs of human life have been detected. Either the site is abandoned or it is completely automated.

Your mission is to infiltrate a hostile robot production facility and destroy and and all technology you deem unsafe.

In the modern, slow paced, peaceful metroidvania game The Masked Mage you play as the last magician alive and set out to discover where magic went all those years ago. Go on a journey to explore a vast and omnious mountain, old temples, and ancient forests.

For old school retro game lovers, ERMedia presents a special bundle for Two Bit Hero that lets you save about 50% of the cost. The ERMedia Retro Collection.

You can also grab yourself a copy of “The Skylia Prophecy” if you buy The Masked Mage in the “Magical Double Pack” Bundle.

These games have already been out for some time now, but if you’re looking for a short nostalgia trip into Metroidvania games past. They might be of interest to you.