Have you ever dreamed about being a box? What a box can do and how a box moves about in the world? Well dream no further because Unbox: Newbie’s Adventure is here to fulfill your dreams. Let us “unbox” this game and see what it’s all about. 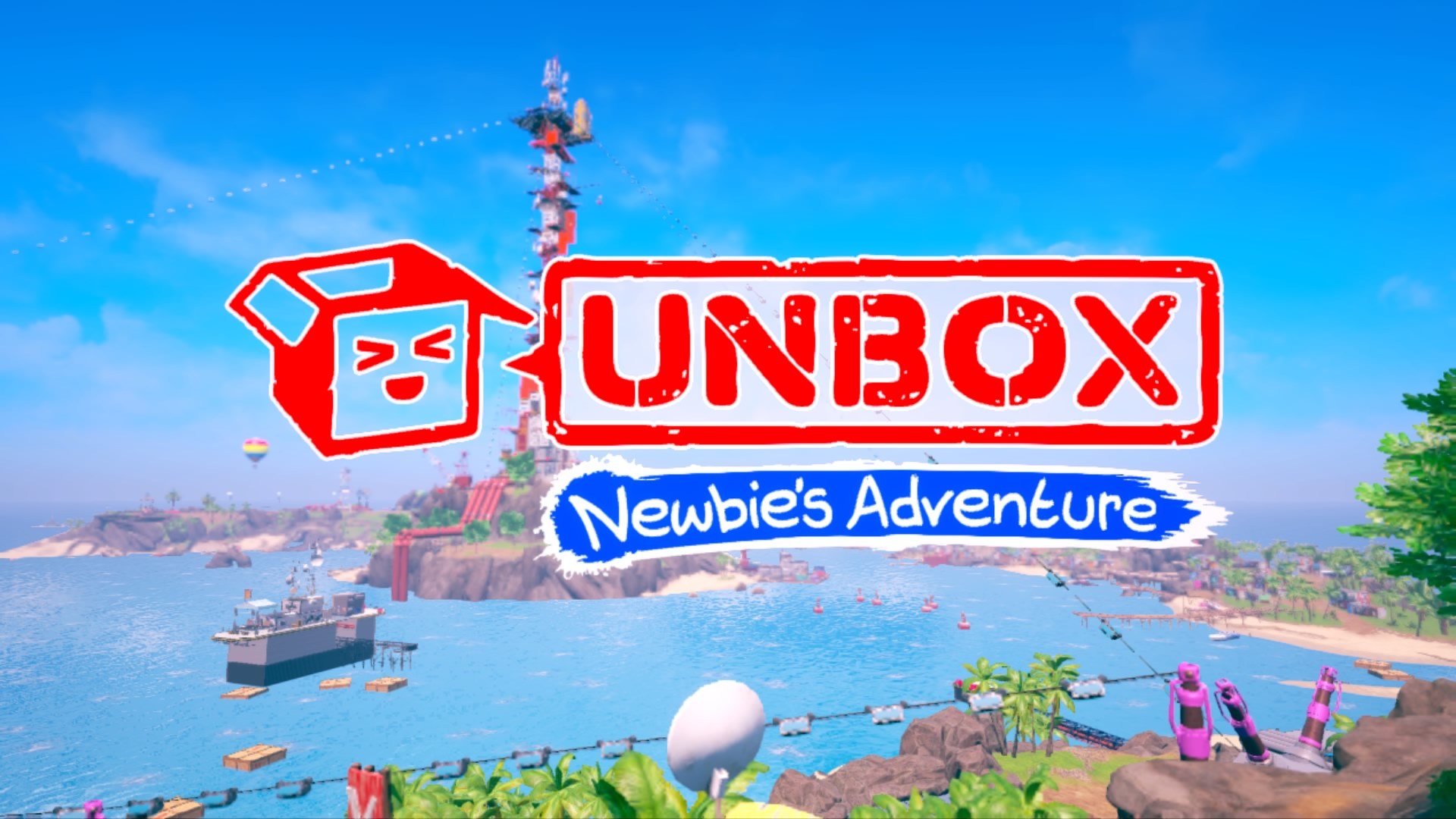 The game is about a lowly little brown cardboard box named Newbie. He was freshly made out of the factory and he was called upon by Bounce, a happy little red box. He is tasked to fulfill challenges and deliver for the Global Postal Service or GPS. They couldn’t find anyone better for the job so they sent this unseemingly ordinary new box.

Gameplay is very simple. You can roll around like a ball by moving the directional button or the left stick. You can also perform a jump by pressing the R1 button. The other thing you can do is perform a double jump by pressing the L1 which the game aptly calls “Unbox”. You can literally see your little box unbox itself out of the box so it can jump higher. This consumes a “life” box though and you have a limited number of life boxes to use. You can always replenish your supply of life box by picking them up all over the area you are in or going to a mailbox which serves as the checkpoint.

Your character will be tasked to go to different areas like the ever tropical Tropical Isles or the freezing peaks of Parcel Peaks. In each area, you will have to collect stamps so you can fight the Boss of the area. Ten stamps are needed so you can face the Boss. To gather these stamps, you will have to complete challenges from the other boxes in the area. These can range from simple tasks like gatherings items or fighting enemies called Wild Cards. 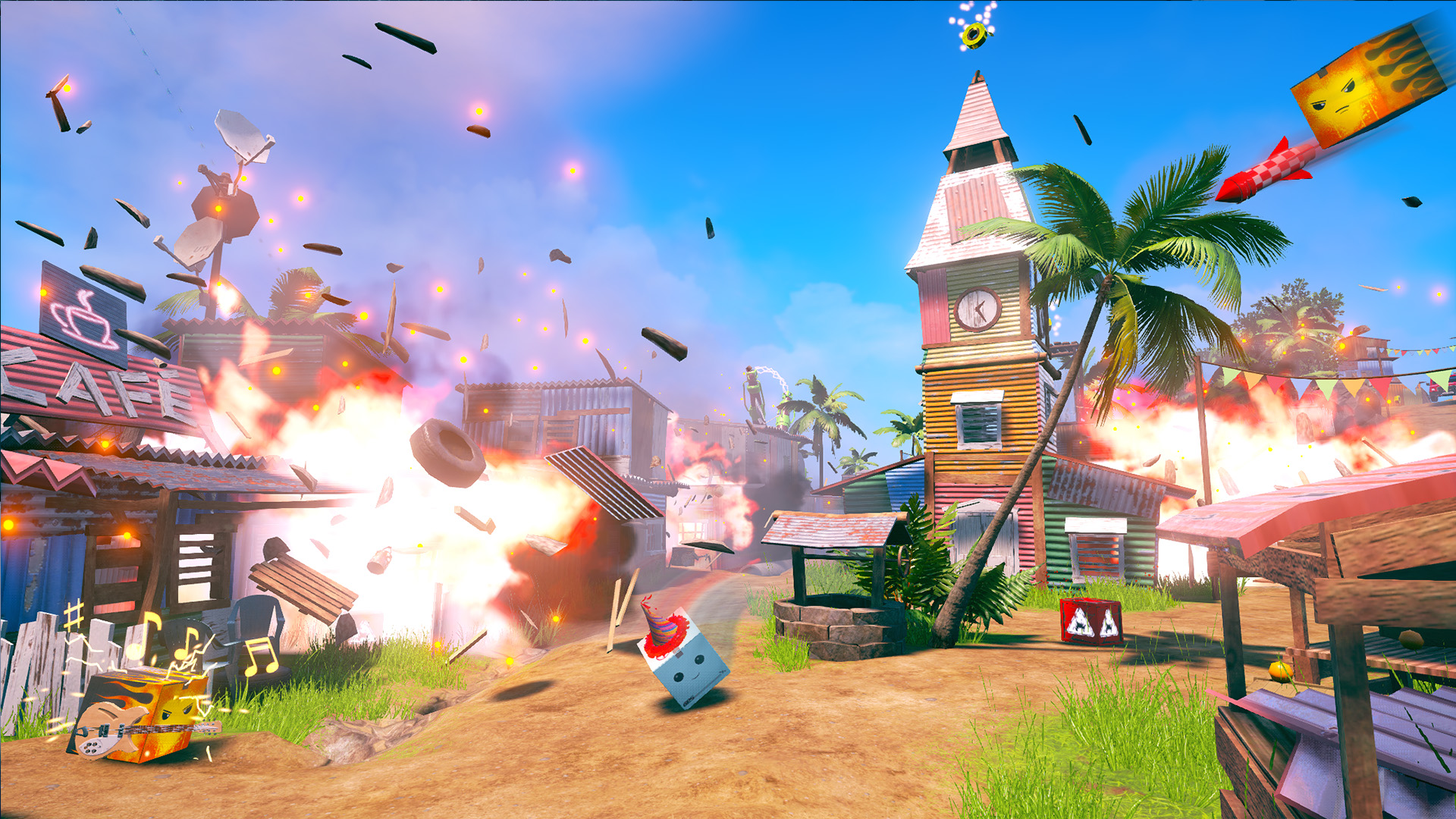 Some other boxes will also challenge you to complete a race either by rolling around or riding a vehicle. And sometimes the task can be delivering an item to another box in the area. Some of these challenges also have restrictions like you can’t use unbox or something like that. Although the challenges are different every time, it is the only way you can progress through the story. There are also times that some tasks repeat itself like the race type of challenges. But these races increase in difficulty so it is still very challenging.  I still find the game entertaining and challenging despite the repetitiveness.

Completing the challenges will also reward you with costumes that you can use to redesign your box. You don’t have to be a brown cardboard box forever! You can customize and mix and match the items that you get so you can be unique. Each area has a shop that lets you do this called the Swift Tailoring (clever, I know).

“I really like the soundtrack of the game. It’s so catchy and relaxing.”

Tasks are not the only thing that you can do in each area. There are also other collectibles and challenges that you can do in your spare time. For example there are about 200 golden tapes that you can collect that are scattered throughout the area. Some of them are easy to get while some others require you to use your wits to reach them.

Another thing you can do in the game is rescue the little cardboard boxes called Zippies who are trapped in cages in the world. Apparently, the Wild Cards can only count to ten so you they have only imprisoned ten Zippies in each area.

Speaking of the Wild Cards, these little rowdy boxes can be a hindrance to your task. They will try to bump you into the water or shoot you with fireworks. Because you are just a box, jumping into the water will kill you. You can bounce once on the water though before you plummet and become a soggy piece of cardboard. You can retaliate against the Wild Cards by stomping on them or shooting back at them with fireworks. The fireworks reminds me of the items from Mario Kart because once you get a box of fireworks, you get a random type of firework each time. It can be anything from an exploding firework or a firework that shoots out balloons and carries you and your enemies into the sky.

I really like the soundtrack of the game. It’s so catchy and relaxing. It makes you want to smile while you are playing even though you would probably be stressed out while you try to out-maneuver enemies or try to make sure you don’t land on water. Believe me, there are a lot of times that this can happen. Especially since it seems the worlds are surrounded by water. It’s a different story in Parcel Peaks though since all you will be seeing are mountains. 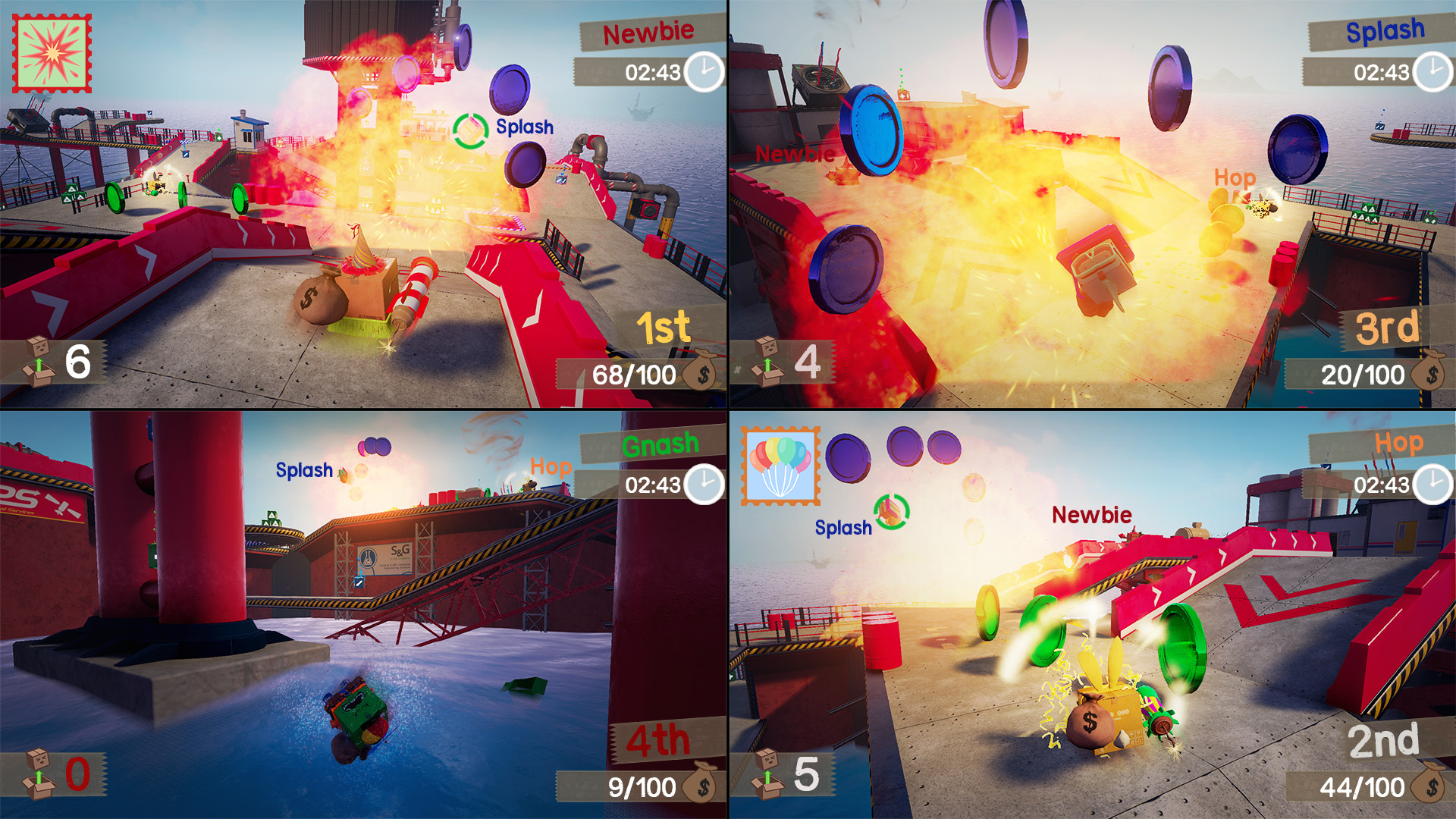 If you ever get frustrated with the main game, the game also features a multiplayer aspect where you can battle it out with three of your other box friends. Sadly it is currently only in local multiplayer but that doesn’t mean it won’t be as fun.

Unbox: Newbie’s Adventure is a platformer open world game that lets you experience what it is like to be a box. I never would have thought I would be enjoying this game. Despite the frustrations that it can give you, the game is so fun and inviting. It is such a delight and is a breath of fresh air. A game that the young ones and the young at heart can truly enjoy. A game that doesn’t take itself seriously but at the same time gives you just the right amount of challenge to satisfy your competitive spirit. If you’re looking for a new adventure, then this is definitely a game worth checking out.

Unbox: Newbie's Adventure - Review
Score Definition
When the issues of a game are rolled and stomped by its greatness, then it’s something to invest on if you have some spare.
Pros
Cute and endearing boxes with their own language!
A variety of challenges
Customizable Boxes
Local Multiplayer
Cons
Newbie gets stuck in weird places
Not waterproof
Controls can sometimes be difficult to master
Can be repetitive
8.5
Great