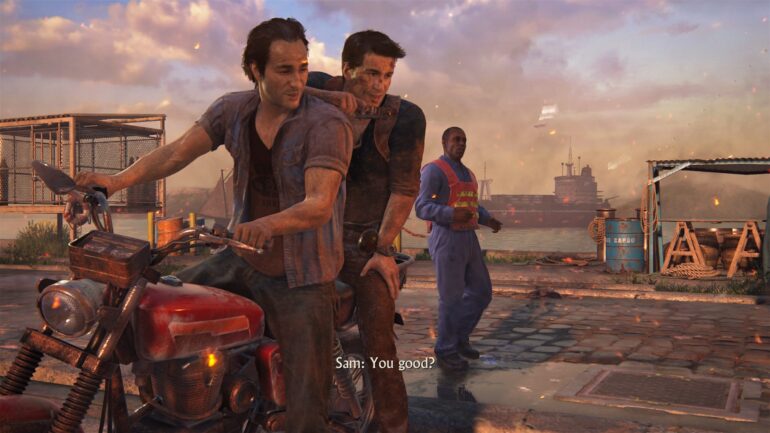 The final adventure of the treasure hunter, the popular Nathan Drake, has come. 5 years since the last release of its predecessor, Uncharted 4: A Thief’s End comes to the next generation console of Sony’s video-game machine. It gives a far better experience and an epic way of ending the franchise with its compelling story, which showcases the emotional and, probably, the most thrilling treasure hunt adventure in Nate’s life ever. And for those who haven’t played this franchise, it’s not a rip off of Assassin’s Creed IV: Black Flag because of its involvement with pirates or Rise of the Tomb Raider for its platforming adventure. No. Uncharted 4: A Thief’s End can give you the adventure of your life… as a gamer.

The story starts off with Nathan Drake and his long-lost and presumed-dead brother, Sam, in a sea chase with goons that then kicks off to the past where it tells a bit of a long-story from their childhood leading to the time when Sam conveniently reappeared in Nate’s life. With a convincing story from the long-lost brother, the Drakes embark in a journey to seek the King of Pirates’ treasure. It was interesting that we are able to see a plot twist where Nate had a brother. It wasn’t mentioned in the previous installments that he had one at all. It was a bold move by Naughty Dog to add up a character that never existed or even mentioned by any of the characters or by Nate himself. And impressively, they were able to connect the missing dots of Nate having a brother without leaving anyone confused. Nate’s struggles on his decisions were clearly tested in every moment, it was a matter of prioritizing. Was it to either sacrifice his marriage with Elena or to lose his long-lost brother once more?

The story is very compelling in a way that you want to finish the game quicker for you to know what the conclusion of the game is. The delivery of each backstory in the game about the notorious Henry Avery, King of Pirates, is very intriguing as well, like how Nate and Sam discovers a lot of clues and bits of historical finds that leads them closer to unraveling Avery’s secrets. Consistent with Naughty Dog’s narrative style, the closure of this final installment gives a nice touch of Nathan Drake’s one last adventure in a way where he’s moved on from the illegal thrills and treasures. And this time, it’s not going to leave you wondering what’s going to happen next. 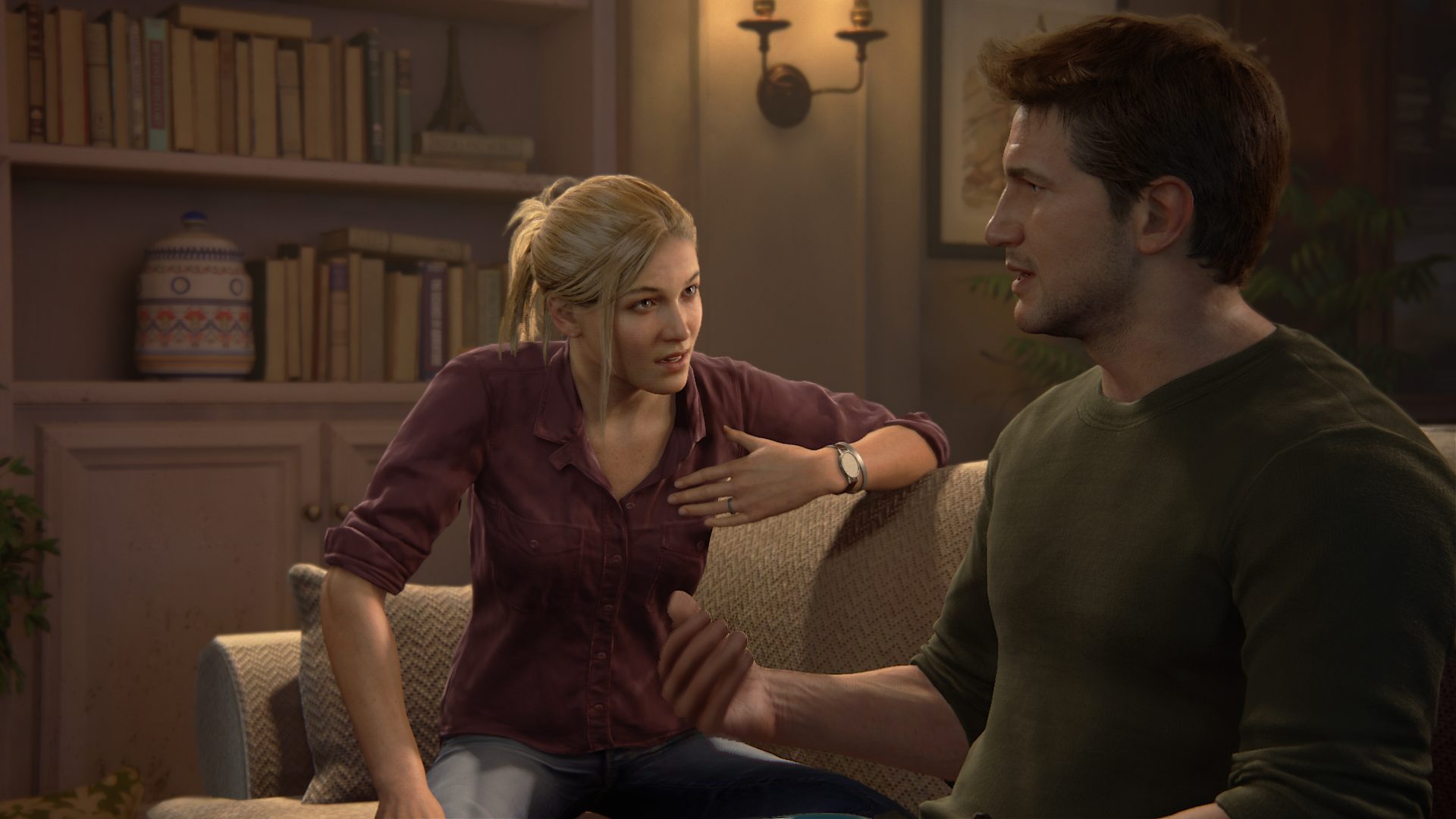 What’s also added in the game that makes it come to life aside from its captivating story are the stunning visuals and details. With the maximum potential of the graphics hardware that the PS4 has, Uncharted 4’s details are far more dazzling than other graphic-demanding games I’ve played on the PS4. I’m really impressed actually. Look at every fine points in the game: the sweat, beards, hair, and the environment makes you say “wow” every time you see a beautiful scenery or place. To tell you, what you see in the whole area of the game and the unreachable places are its in-game graphics, not just a mere background.

Uncharted 4’s Madagascar is by far the most the beautiful place I’ve ever seen in any other game. What I’m also fascinated with as well is the transition of the game’s cinematic to its in-game visuals and vice-versa. With Naughty Dog using the PS4’s full potential, Uncharted 4’s seamless in-game scene transitions give you the true cinematic experience. However, there are times when the game slowly renders on specific areas of the game which makes it a bit annoying. The water splashes look more of an 8-bit effect which is quite disappointing even for a small detail that could have been improved in some way.

Uncharted 4: A Thief’s End’s dialogue has been loyal to its series. It’s funny and also emotional in way that it can make you internalize what the scene wants you to feel. Nolan North is back to do the voice-over of Nathan Drake, Emily Rose as Elena, Richard McGonagle as Sully, and now featuring Troy Baker as Nate’s brother Sam. This strong lineup of voice-actors is what also makes the game alive aside from its fantastic graphical achievement. It’s pretty impressive that Nolan North still has it – the enthusiastic young voice that really suits the protagonist, Nate the Great. 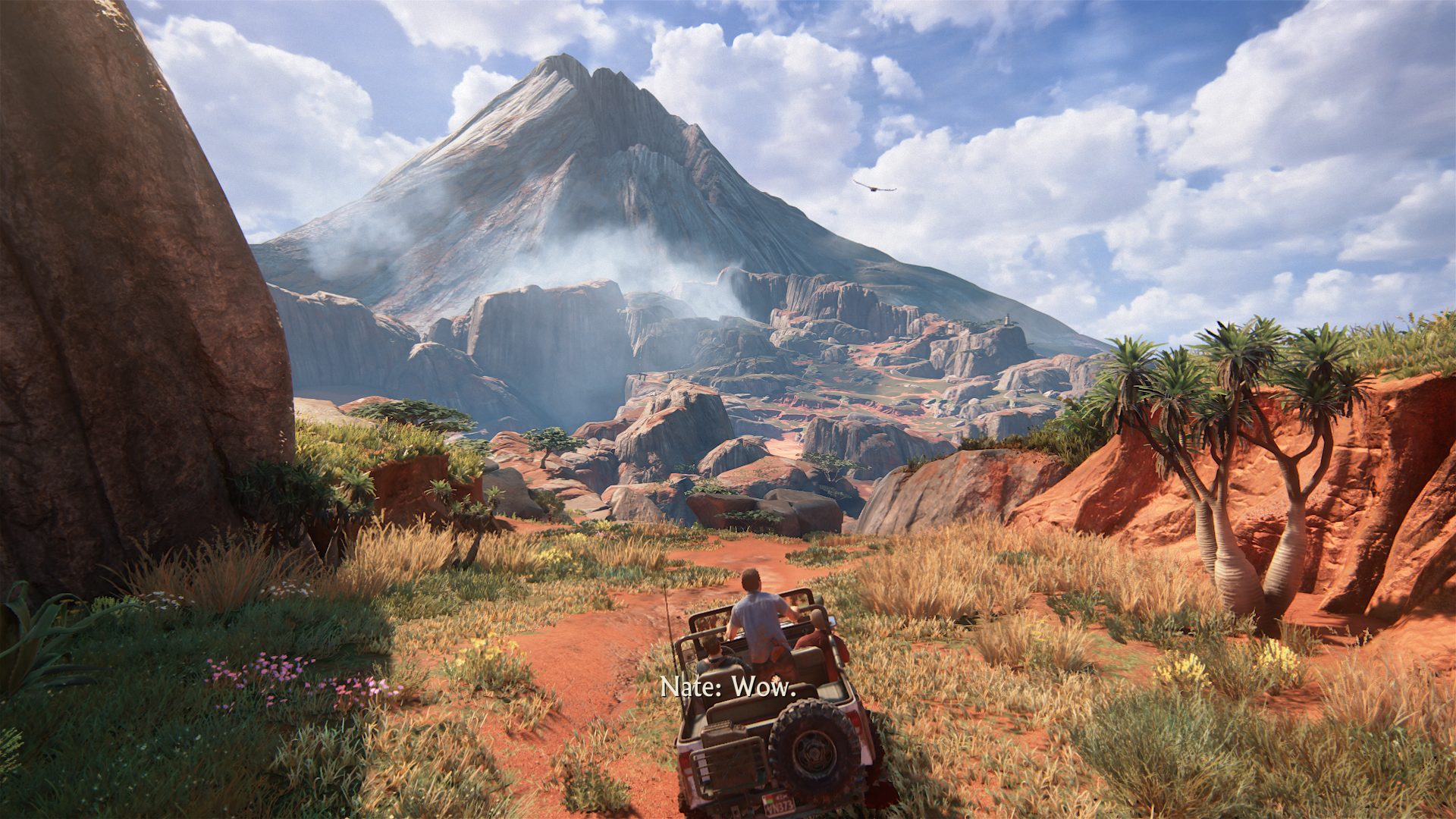 The music orchestrated in Uncharted 4 still retains some of its elements from the previous game, but this time it adds more of a modern touch to its score especially when gunfight starts. There is also guitar-plucking music inspired from The Last Of Us which makes a more suitable atmosphere to what the game’s story has offered.

The game’s gameplay elements have been improved, as well as its controls. The swift and smooth movement of the camera made the aim better where you don’t have to adjust the sensitivity setting. There has been some added features in the game that weren’t offered in the previous Uncharted titles. I like how they balanced everything out in the game. Naughty Dog made sure that you can use every feature that the game offered like: driving, swimming, swinging, and sliding off cliffs and edges.

I also love how they incorporated the grappling hook in the game to make impossible paths possible to traverse. And yes, this time the game offers driving in some parts of the game, and good thing too that Nate can finally swim underwater! Stealth has been greatly improved in the game since this wasn’t featured in the old Uncharted games, now it encourages players to choose between a head-on gunfight against dozens of goons or just take them out slowly without wasting ammo. However, there are these The Last Of Us moments where your AI companion obnoxiously passes in front of goons without being seen when doing stealth, which I find rather more amusing than disappointing, really. 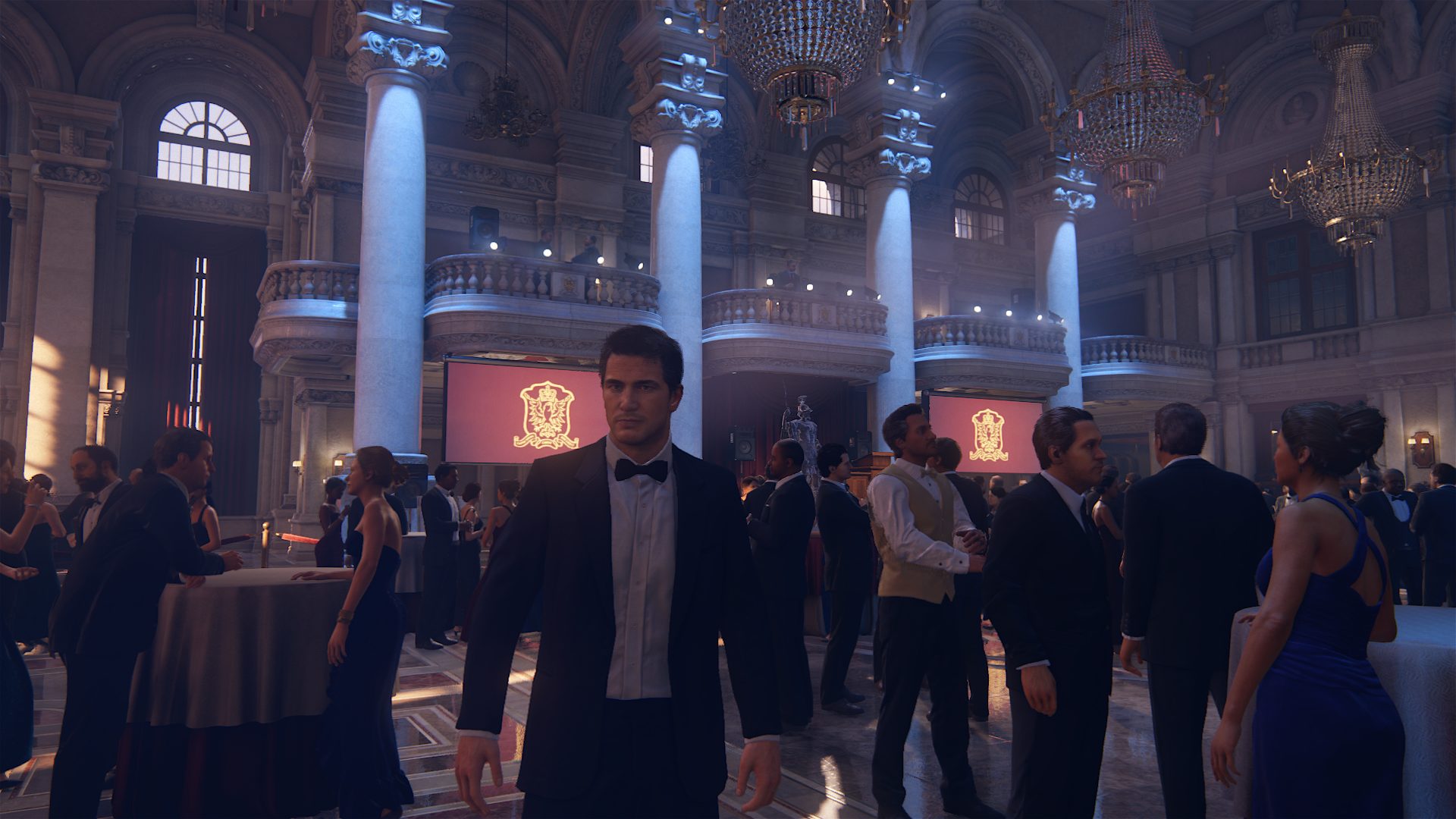 Uncharted 4: A Thief’s End still gives that very challenging combat as a third-person shooter adventure, and this time with larger locations. You still encounter those heavy brutes covered with spongy-armors and big machine guns just like in the previous Uncharted installments. The game is not too linear anymore unlike its predecessors, it encourages you to explore to find hidden treasures and letters that will add more in-depth details to its plot. I was pretty amazed how big Madagascar was. In the game, Madagascar was the second location I took time to explore next to the pirate’s home colony in Libertalia. There’s also “Photo Mode” where you can capture enticing scenes with a lot of photo editing options to make your picture better. Time to show off your gaming photography skills now, shall we?

There is also a multiplayer mode in Uncharted 4. It features a 5v5 team-deathmatch that features Mysticals, supernatural powers that players can use in the game like the Wrath of El Dorado that can kill other players who stand beside it. The playerbase is actually decent as you don’t have to wait for more than 7 minutes for a match. It’s a decent multiplayer experience that you can chill out with your friends and other Uncharted players if you need some time to rest from its story. 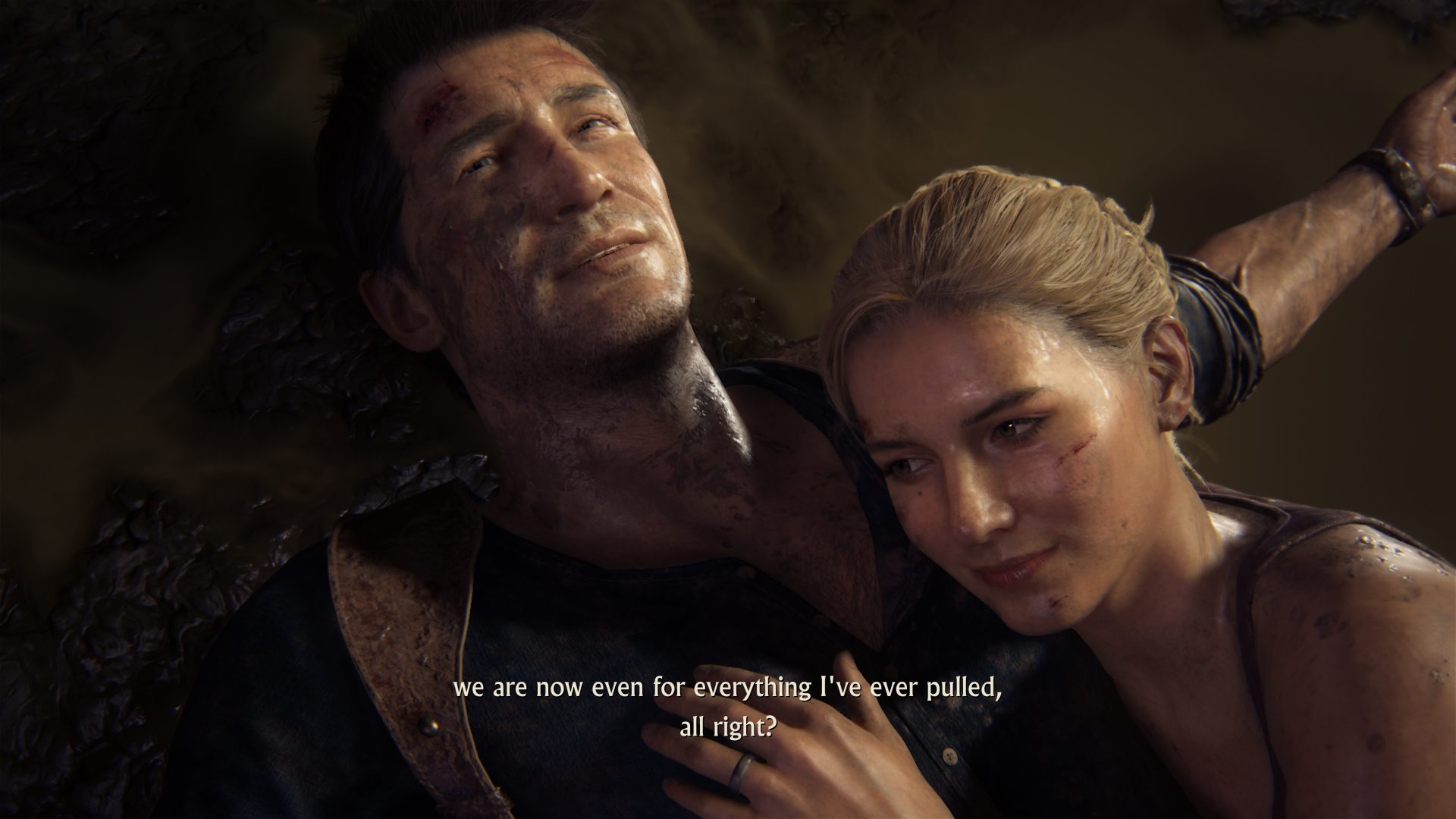 I’m just only a bit disturbed with its 8-bit-ish water splash, but it didn’t affect my verdict for Uncharted 4. With its most compelling story, great soundtrack, improved AI and gameplay, and its glorious graphics, Uncharted 4: A Thief’s End is a game that gives you a fascinating ending story of Nathan Drake’s final adventure and an immersive cinematic experience unlike any other adventure game out there. If you own a PS4, don’t miss out what Uncharted 4 has to offer!