Learn all about the game here with more details about new characters! 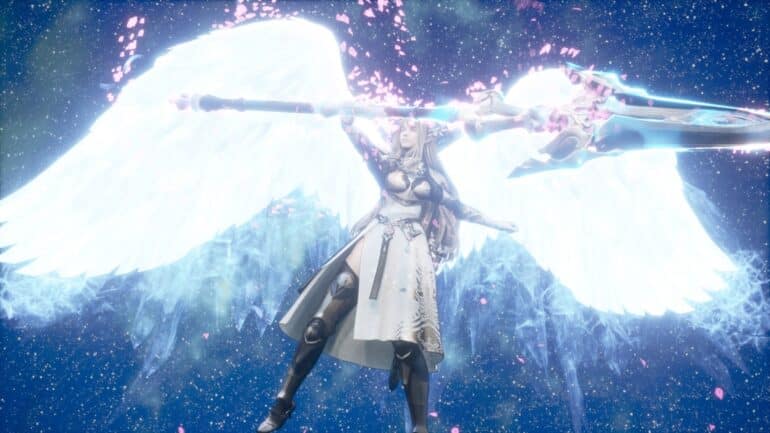 Valkyrie Elysium’s story begins a long time ago when Ragnarok, the End Times, is now taking shape in all realms. Odin, the All-Father, has now created an emissary of redemption called the Valkyrie, and her sole task is the salvation of a doomed world. This is where the story of a new Valkyrie begins.

Valkyrie Elysium is the latest title in the Valkyrie series that depicts the death of humankind and the existence of gods with a unique worldview based on Norse mythology. It will retain the familiar special attacks and combo system of the first title of the series while taking it to the next level with a new three-dimensional, fast-paced battle system

Armand is a human that meets with the Valkyrie in Midgard. He seems to be looking for something in this world, even though he does not know exactly what he is looking for. Voiced by Harry McEntire.

Spirit warriors that serve the Valkyrie are called Einherjar. Just like its predecessors, the story will revolve between the Einherjar and Valkyrie. They will fight together with the battle maiden of Odin and will be playing a supporting role. They will assist in combos and imbuing elements while summoned. Gain the advantage in battle by using Einherjars skillfully.

Kristoffer is an Einherjar specializing in spear combat. Before she died, she was the princess of South Lucarda.

Taika is an Einherjar who can use magic in battle. She was once a Guardian who protected her motherland with magic.

Players can summon an Einherjar by getting the soul gauge filled up. They can do that by collecting items and/or blue souls. When they are summoned, they will grant their elemental properties to Valkyrie, strengthening her attacks. Her body color also changes when the Valkyrie is under the effects of the Einherjar’s elements.

The Divine Arts are special attacks that are learned by obtaining scrolls from treasure chests. Equip them to use a filled-up arts gauge that can be filled up from items and landing combos. Each of these Divine Arts will have an associated element it can be used to exploit an enemy’s weakness may provide an advantage in battle.

Fire: Fire Storm – can conjure a fire storm from underneath the target

Lightning: Lightning Bolt – Fires a bolt of lightning at target. Also damages other enemies near target.

Earth: Mortal Suppression – An earth magic attack that concentrates the caster’s power into a target, drawing nearby enemies towards it.

Holy: Extreme Void – Creates a holy sword that strikes from below to launch the enemy into the air.

Darkness: Punishment Blast – A javelin formed of darkness that rains down from the sky and explodes on impact.

Soul Chain allows for the player to extend a wire to a point in the distance to travel quickly. It will allow players to go where a single jump cannot reach and can be used to quickly move in on an enemy

If players land an attack on an enemy, it will increase the combo gauge. Land another attack before the gauge empties to maintain the combo. Accumulate lots of combos to have the arts gauge fill up thus enabling the use of Divine Arts.

Players can equip up to two weapons simultaneously and they can be swapped depending on the enemies they face or their personal playstyle preference. Enhance weapons levels to increase the attack power and unlock new attacks. When weapons reach a certain level, they can attach runes to them, which can enhance offensive or defensive power.

Alfodr (straight sword) – A sword bestowed by the All-Father Odin.

Baleygr (spear) – A beautiful white spear imbued with the power of the gods.

Bolverkr (rapier) – A slim sword which excels in attack speed.

Herteitr (double-edged spear) – A long polearm that is good for continuous attacks or for throwing.

By acquiring skills, it will enhance and unlock Valkyrie’s abilities and actions. It can show various effects like offensive, defensive, and supportive.

Players can train Valkyrie at a training ground called Vingolf. She can summon enemies that have been purified in the past and train against them.