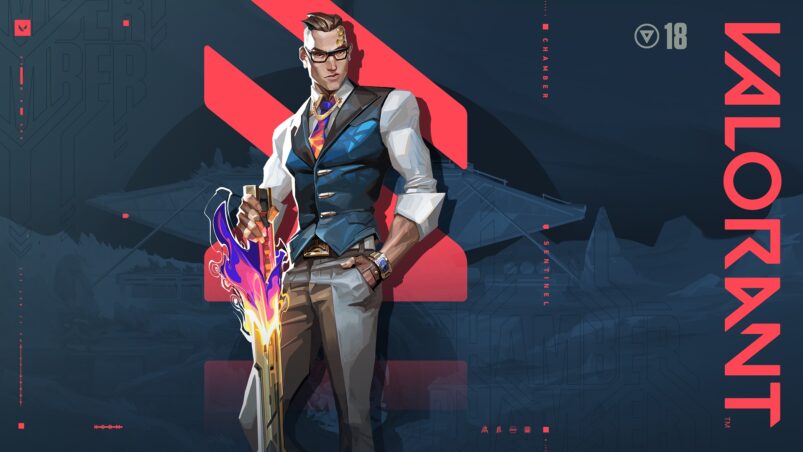 Valorant is one of the most popular free-to-play shooters recently and has been pumping out some new content, which includes new characters. One of those recent sentinel agents that will be added to the game today along with the 3.10 update is none other than – Chamber.

Here are the complete details of the Valorant new Sentinel Agent Chamber.

Valorant New Agent Chamber – How Does He Look?

Riot Games previously shared a video that showcases the look of the new agent Chamber. He is a well dressed and well-armed French weapon designer with several weapons and a solid lineup of abilities to use in combat. He is called the gentleman assassin and would enjoy the finer things in life. When he takes a shot in battle, he would record all details of the encounter.

Chamber is a tall man and usually wears a suit and tie, sporting yellow-tinted glasses, and very extravagant when it comes to accessories. He does indeed enjoy the finer things in life.

Chamber usually uses a pistol and a big golden sniper rifle, which suits his gameplay of highly lethal, pinpoint accuracy. He also has several other weapons in his arsenal, but he is usually seen carrying these two weapons.

It’s no surprise that Chamber, previously known as ‘Deadeye’ in datamine dumps, has a lot of firepower. With his Headhunter ability, he may summon a special heavy pistol, and his ultimate unleashes a one-shot sniper.

As a Sentinel Agent, his exact role in the meta is still unknown. Below, you can find the details on all of his skills/abilities:

Trap that can scan enemies when tripped and with another effect. When an enemy trips this particular trap, it will then countdown to zero, which then destabilizes the terrain around the opponent. The effect makes them slow down within that small area.

When activated, it will swap to a heavy pistol. Use alt fire with the pistol to aim down sights. It offers a lot of damage.

You can place two teleport anchors at your preference. You can also pick these up again so you can redeploy them at another location. While you are in the range of the anchor and running on the ground, you can then activate them to teleport to the other anchor for an easy escape or a well-timed ambush.

Summon the most powerful custom sniper rifle in Chamber’s arsenal. This can kill an enemy with any direct hit. Other enemies that are nearby the blast area will be caught in a field that will slow them down.

Chamber is now available today, November 16, 2021, which is also the launch of Patch 3.10. This is two weeks after Valorant Episode Three, Act Three will be available in the live servers.

Valorant is available on PC.