It was an enjoyable adventure, though it had it's short comings. 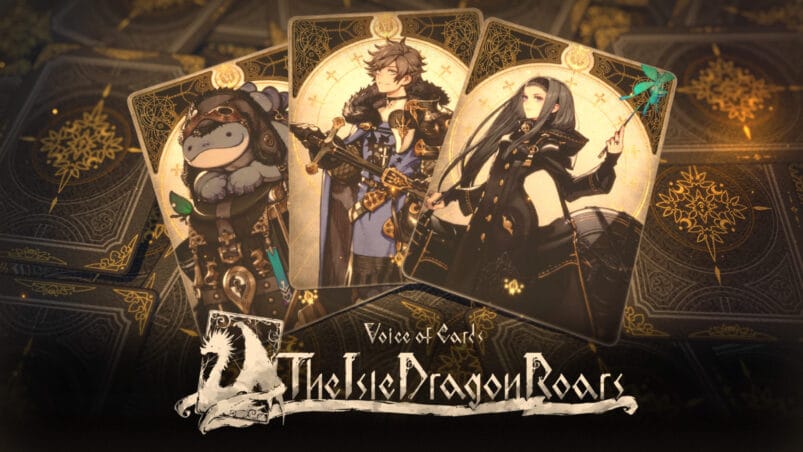 The Gamemaster is someone who gives life to a tabletop adventure. The words he say should paint a vivid mental picture that matches any drawing on paper or on screen. In the case of Voice of Cards: The Isle Dragon Roars, it is his voice that describes everything that’s going on in the adventure. Right down to the final moments when the adventure inevitably draws to a close.

Voice of Cards: The Isle Dragon Roars is a turn-based RPG that utilizes cards as more a theme rather than a central mechanic. There are dice rolls present in the game, but it closer in line to pen and paper role playing games than they do with collectible card games. The player takes control of the would-hero (a character the player can name), a young gun who would go through great lengths gold and glory. He is joined by his faithful companion, Mar, a monster of mysterious origins.

The game itself starts immediately after the conclusion of the demo. Queen Nilla was about to reward the fellowship of the Ivory Order when the Dragon woke from its slumber, and struck fear into the hearts of the people. In response to this, the Queen called for a hunt of the dragon and that’s where our small band met with Melanie, a witch whose singular goal is to kill the dragon that killed her parents. Together, the rag tag crew of amateurs set forth to slay the beast.

The way we interact with the world is through cards. Through our eyes, the Isle of Bliss is made up of hundreds of face down cards spread across a large table. Our party takes the form of a game piece, and that piece is responsible of turning over cards to expand our ‘view’ and allow us to interact with other elements in the world, such as character and location cards. What sets this movement system apart from classical RPGs is the fact that you can move back to any face up card on the map. Because of this, I was able to move point to point without having to worry about monster attacks.

There are random encounters in the game, both in the form of monster encounters and random events that require a dice roll for an outcome to be decided. But because there is very little reason to roam around, save for one, monster encounters are only frequent during explorations.

Before we talk about combat, I would like to make something crystal clear – Voice of Cards is a true RPG through and through. You may see card ability go off now and then, that is the result of player choice. Not randomly chosen cards from a deck of 50 cards. And encounters in the game are far too frequent. Which is why the game incentivizes quick and decisive battles over anything else. With that out of the way, let’s go into card combat.

Each character can have 4 skill cards active at a time. Over the course of the game, characters are able to unlock multiple cards. It’s up to the player to decide which skills to use to fully optimize card with their three party members. This is important because gems are required to activate skill cards, and only one gem is generated per turn. Insisting on powerful skills off the bad means that battles will take longer to resolve. Longer battles reduces the amount of experience and gold the party earns. So, it’s a really neat system in which a balanced hand is most beneficial to the player.

The five elemental attributes – Fire, Water, Ice, Light, and Dark – play an important part in the game. Certain characters react differently to other elements. This is something the player won’t know until they start leveling up and gaining attribute cards. A character can have as many attribute cards as the game would allow. Think of them as passive skills, and knowing which character is resistant to what element helps in area specific encounters. There are also status ailments that both ally and enemy can suffer from. In my experience, it’s usually there to further help end encounters faster, with no lingering effects after battle.

By visiting towns, the would-be hero’s party are usually given one objective – find out more clues to track the dragon down. But that’s not the only thing the player can do there. They are able to talk to townsfolk and even help them out in exchange for a mystery card. (Something that’ll come into play further along into the game.) Aside from the regular vendors, a game parlor is present in every town to pass the time.

There are four kinds of minigames in the game parlor. The games themselves are the closest thing we’ll get to actual card games at they involve an element of luck to them. Basically, you are required to create sets using suites or two or more cards of the same kind equal to the cards’ value. Once you’ve made a set, remove all cards in hand until there is only one left hand. This will keep going on until all cards from the deck have been dealt to all players. The player with the most points at the end is the winner. The other modes introduce additional rules that make the game harder… and even more luck reliant.

There’s not much to say about the game’s visuals, besides the well-made preset card faces that make up the world. The presentation, however, is supremely excellent. The whole world exists on a table, and whenever battles occur, the board shifts to a board that resembles that of a simple Hearthstone set up. The card effects are something to behold, and I have yet to tire seeing them 20+ hours into the game.

There are no other voices beside that of the gamemaster. He narrates everything that’s going on within and without the party’s knowledge. He is also known to provide hints for the party’s benefit. What we lack in terms of voice, the game makes up for it by having jovial tavern music playing in the background. It upbeat tunes make it feel as though we are going on an adventure at a moment’s notice.

The adventure may have the would-be hero, Mar, and Melanie as central characters, they may have the playful elf Ridis and the extremely focused Bruno as part of the fellowship as well. Unfortunately, as oddities go, these misfits are more likely to cause trouble rather than being helpful. But them being part of the team just made the journey even more enjoyable. Ridis is a money blackhole and this is probably the first RPG I’ve ever played with a professional nutritionist on my team. By story’s end, they are part of the family.

As for the overall story, it’s ok. Though I would like to say, coming from Square Enix, I was expecting a little more story. But what we have right now is serviceable. The heroes have their moments here and there, but the rest of the characters are too one dimensional for me to care much. If there’s going to be a sequel, I do hope the characters get more depth to them.

As much as I loved the artstyle and accompanying music, the journey ended far too quickly for me. The real villains didn’t reveal themselves until near the end of the game. When I realized this, I wanted the story to be over with. If it weren’t for the surprising final twist and the gamemaster, I would have completely tuned out. So, good save there. The treasure hunting part was ambiguous at times too. I ended up wandering for long stretches, following vague location clues that would infuriate less determined players.

Voice of Cards: The Isle Dragon Roars overachieves in presentation and gameplay mechanics, and yet plays it safe everywhere else. It lacks depth in many aspects and the story’s too short for my liking, but that’s more to do with what I’ve come to expect from RPG’s. Remove that, and Voice of Cards is an adventure that’s fun to look back on from time to time. Hopefully this isn’t the end of for this game. To quote the gamemaster “I hope we meet again in the world of Voice of Cards.” 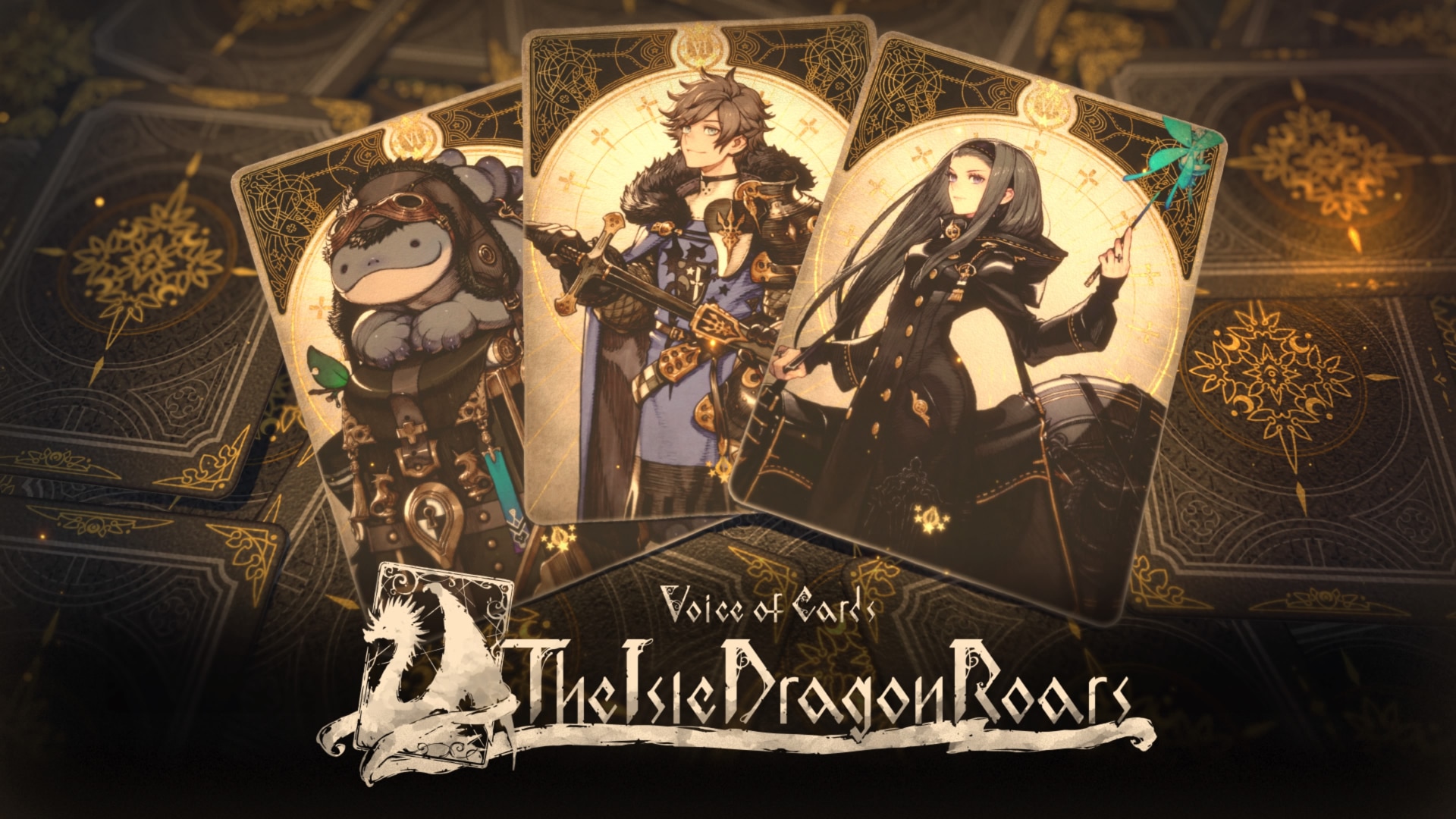 Voice of Cards: The Isle Dragon Roars – Review
Score Definition
When the issues of a game are rolled and stomped by its greatness, then it’s something to invest on if you have some spare.
Pros
Quick and effective turn-based combat
Enjoyable mini-games
Likeable heroes
Generally enjoyable
Cons
Smaller in scope than it initially appears
Indistinct 'terrain' makes treasure hunting harder than it needs to be
All other characters felt one dimensional
8
Great