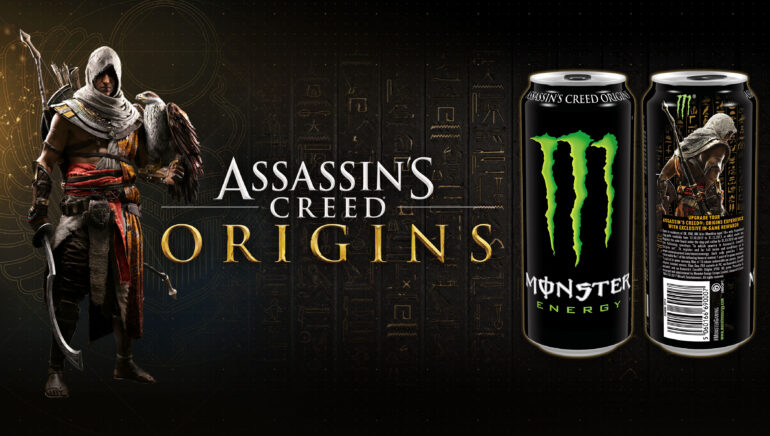 It seems that Monster Energy is going to partner with Ubisoft’s Assassin’s Creed Origins.

In a recent press release from the Assassin’s Creed publisher today, the partnership between the two brands will give customers and fans access to in-game content as well as prizes! And to complement Assassin’s Creed Origins‘ launch this October 27 on PS4, Xbox One, and PC — more than 500 million Monster Energy cans will get a design overhaul that showcases the game’s protagonist Bayek and some other characters.

In just a month’s time, October 1 to be exact, this partnership will also include three collector cans, multiple prizes, and massive support in stores across Europe.

Here are more details about the bonus in-game contents:

BONUS IN-GAME CONTENT UNLOCKS
From early October until the end of December 2017, players will have the opportunity to collect different Assassin’s Creed branded cans: 100 % of them will unlock in-game content when redeeming codes at: www.assassinscreed.com/monsterenergy . Single cans will offer either a pack of in-game resources such as Iron, Wood, Animal Skins or currency packs (Drachmas) to facilitate the player’s progression.

Cans included in a pack of 4 will unlock unique weapons like the Dust-Biter Sword, the heavy Face-Breaker, the Sceptre of Thaati and the Rain Bow.

ADDITIONAL PRIZES
As well as in-game content, prizes such as gaming consoles, Assassin’s Creed Origins video games, Monster Energy gaming fridges and exclusive Monster Energy apparel will also be up for grabs to EMEA fans as part of the partnership.[/alert]