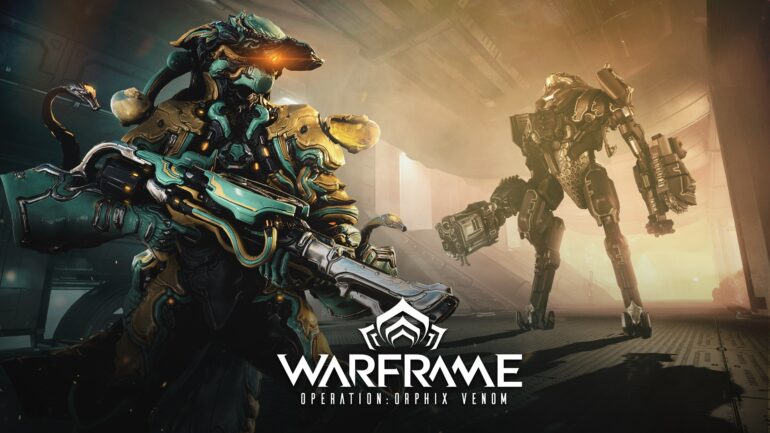 The newest event unlocks its latest free mech and the new Warframe called Lavos. It is now available on PC.

By harnessing the experimental power of Lavos to transmute the physical realm, players will combine Elements with Abilities to thwart the hordes. Tenno will earn the 45th Warframe in the all-mech event, Operation: Orphix Venom, a first-of-its-kind Survival Mode — where players can access mechs for free while in the event — that escalates into a challenging new Sentient boss battle. In yet another first, when players ‘gift’ Lavos to a friend, they will receive a free Lavos Orbiter decoration for their efforts!

In Operation Orphix Venom, Sentient forces have crippled all Warframes, rendering their powers useless. Thanks to the Entrati Father, players can outfit free mechs found on the battlefield (even if they didn’t have one before) for the duration of the event, to team up and drive back the impending onslaught.

Operation Orphix Venom will push seasoned Tenno to their limits with three new Sentient enemies, the Ortholyst, a lightweight sentient that deploys massive long-range cannon ammo; the Choralyst, an ethereal Sentient wielding a sonic barrage and a thunderous homing orb; and the Summulyst, a high-order Sentient, armed with twin cannons, that bifurcates its body to create a portal to summon reinforcements and projecties. The Operation culminates in a face-off with the brand new boss, the Sentient Dolicholyst.

But don’t wait! Operation Orphix Venom is a time-limited event, starting Friday, December 18, and ending at 11am PT/2pm ET on Monday, January 18. Players do not need to own a mech to participate — Just jump in! Prerequisites to participate require having completed The War Within and have accessed the open-world Heart of Deimos.