Where the Heart Leads – Review

Words have a variety of meanings to everyone listening. 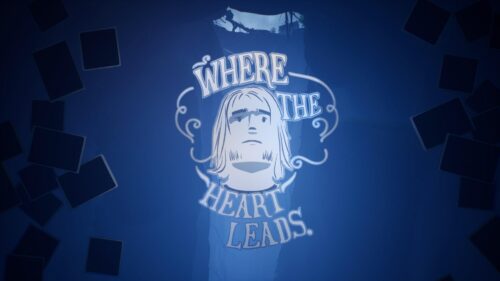 Where the Heart Leads from Armature Studio is not a game for everyone. It is a very text-heavy game with no voice acting and few game mechanics besides walking around and clicking the X or Square button.

In many ways, it’s an interactive visual novel. Even Todd Keller, director of the game admits in an interview with PlayStation that it “is definitely not for everyone, and we never wanted it to be. It walks its own path, and we deliver it to you with the very best of hopes for you and your loved ones this year.” It is, however, a game for me.

Where the Heart Leads is a game for those who are drawn to stories that matter – stories that hook your gut and make you care deeply about the lives of its characters. Characters you know and cheer for and want to comfort when they’re upset. There are moments that the game sometimes becomes bogged down with a lack of definitive direction with where to go, but overall, the game is very successful in its storytelling and presents a staggering number of choices. Many games give narrative decision-making to the player, but the level of impactful choices here is really something to behold.

Where The Heart Leads follows Whit, a beloved husband, and father, who ventures into a sinkhole to save the family dog and descends into a surreal journey through time where he discovers he can alter his past, present, and future.

Over the course of the game, you can decide between minor things like what toy to buy for your children: the inexpensive toy that will show them that fun can still be obtained when saving money or expensive toys that will break the bank but will bring them more joy.

You also have to make more major ones like how to pick yourself back up after you’re evicted from your home: do you sell a piece of land your wife owns and move into the city or build an artistic treehouse that only you seem passionate about? All the choices you make feel as if they’re the right choice, but I always wondered what would have happened had I chosen differently.

At the center of everything is Whit. He can quite literally be who you want him to be based on the choices you make. In my 10 hour-long playthrough, Whit was a devoted husband who put his wife’s passions before his own and supported his children in their choices and careers. He also stood up for his misunderstood artistic brother, Sege, whenever he got the chance and would often make sacrifices like declining a great job if it meant Sege could get it.

The characters around Whit are, for the most part, well written. I cared deeply for them – especially Sege. Sege’s life was off the rails from the start by a mixture of his own doing and a father who was a bit of a jerk, and I wanted nothing more than to try and make him happy. The relationships you build in the game feel tangible, the emotions feel real, and there were several moments where I grinned in triumph or cried in sadness over moments with my favorite characters.

In most of the game, save for the beginning and end, Whit is the only character who is detailed with a face, clothes, and movement. Throughout the rest of the playthrough, as you maneuver through the surreal, dreamlike world, characters are colorful, 3D forms who move by disappearing and reappearing in a fluttering of pages. I found myself wishing on occasion I could see the characters in detail.

The only glimpse you really get is in the game’s menu where you can read documents, letters, stories and other memories you find that are accompanied by a simple portrait of the character(s) it’s about. The models of the characters are beautiful, and the way they traverse the surreal landscape pairs perfectly with the dreaminess of the world, but sometimes it pulled me away. It could also be difficult to interact with characters. Often you had to stand in a specific spot to talk with them.

The world you explore is beautiful and painted in rich color and the edges of the world are often broken and fragmented like you’re on a giant floating island and add to the surrealism. Landscapes are lush, cities are detailed with places to explore, and trees, grass, and flowers rustle in the wind.

The game’s music is simple but very effective with its melodious repetition that works perfectly in many of the game’s key moments to help elicit an emotion. Overall, the artistic and musical direction is top-notch, and it seems as if everything in the game is intentional and exists to help pull you in and become attached to the world and its inhabitants.

A couple of times I had to save and restart the game due to some lighting issues. In these moments, anywhere there was a reflective surface like a glass or a window, an incredibly bright light shined from them and made it impossible to see where I was going. Light also shined out of my character’s face. When it first happened, it was just light coming from Whit, and I thought it was an interesting design choice, but then the game moved into a town setting that I couldn’t see due to the reflective light. I restarted the game, and it was gone.

Where the Heart Leads is over 600,000 words. That is not to say you’re going to read that many, but over the course of the game’s branching paths and choices, that many exist. As soon as I finished the game, I knew I wanted to play again. I wanted to see where else I could take Whit, his wife Rene, and his brother Sege, and the dozen or so other characters. After beating the game, I rewatched the trailer and realized I didn’t experience over half of the scenes in it.

Where the Heart Leads doesn’t tell a story full of action sequences and battles with grand sweeping scenes, but it does tell a story about a man and his life, a town and its inhabitants, and it does a damn good job of making you care as you maneuver obstacles with subtle nuance in impactful ways through the power of choice.

Where the Heart Leads – Review
Score Definition
Almost perfect if not for the nitty-gritty. If it’s quite there but not enough to push the boundaries, it’s still an awesome game.
Pros
Great Artistic Direction
Relaxing, evocative music
Characters you really care about
A reader’s dream
Cons
Some glitches
Can be difficult to know where to go
Occasional control issues
9
Excellent