This cat's got some sharp claws 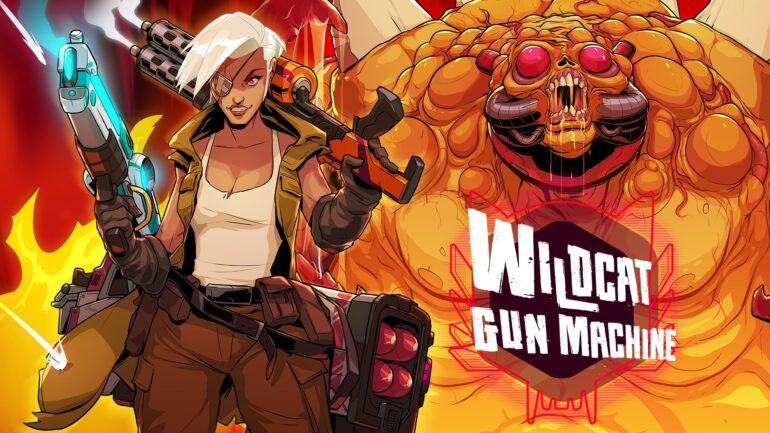 Most games have a nice hook to them, and in Wildcat Gun Machine, it’s all about the intense bullet-hell action. That alone is good enough to get the interest of many players. But if you make your entire game all about that initial hook, then you’ll have to be creative in keeping players interesting in your game that has finite content. Unfortunately, it’s either going to be a case of “love it or hate it” when it comes to this game.

Wildcat Gun Machine is a bullet hell dungeon crawler where your only goal is to push back demonic hordes all the way to a final battle between light and dark. There is no story to speak of, just your female protagonist and her ability to get back into the action using spirit cats. You also have a modest amount of guns to banish the forces of Hell with but the way the game doles out those guns is slow at first and then at the end, it just hands out guns like candy.

The flow of the game is simple – go to the next accessible room on the map, kill all the demons that lay in wait, and advance to the next room. If you persist long enough, you might just reach the miniboss to have a chance to fight for a colored key. Keep repeating this cycle until you have all 4 keys and you’ll have the opportunity to fight that level’s boss… which usually is a giant mech that’s been possessed by demonic energies.

Although, this is an oversimplification of the game’s flow. The routes do get more complex, with short side passages that hold somewhat useful items like weapon reloads and green shields. Rarely will you find a new weapon at the end of a side passage and I’d argue that the guns I’ve collected there weren’t better than the guns found along the critical path.

There are also some neat twists like mines and environmental hazards present on each map, which is nice and all but the game just stops there. There are teleporters in the later stages of the game but they just move things forward instead of making things more interesting where it matters most: the moment-to-moment combat engagements.

Your character has a primary weapon with unlimited ammo and a secondary, more versatile special gun with limited ammo. What I really like is the way this has been balanced in such a way that most encounters will drain your special ammo rather quickly. But if you aim your shots carefully you can go between fights, restock ammo, and complete the waves with enough ammo to start the next fight. Very rarely did I feel like I was out of ammo and had to settle with my weaker primary to get through fights.

There are over 40 gun types in the games. And honestly, it just boils down to what your preferences are. The guns are just not unique enough to warrant ever going back to using them. On top of that, the late-game guns are a combination of the weapon traits that are too good to pass up. You can always challenge yourself to use the basic peashooter. But for everyone else, changing to the most powerful gun on offer is far more practical.

This somewhat extends to the Gunmachines too. You won’t have a reason to use weaker versions of the Gunmachines though you have the option to choose which one to take into combat. This is strange because they serve the same function for the same amount of ult charge.

For me, the super attack feels more like a novelty than anything else. Before version 1.006, it took forever to build up ult charge. During that time, you could be dead and forced to restart from scratch. All the suits are great for clearing rooms but none of them offer a guaranteed clear before their timer runs out. And with only 4 forms to choose from, it’s not a very fleshed-out feature.

On the flip side, enemy variety is one of the game’s best accomplishments. Each stage has its unique blend of enemies that charge at you and those that shoot from afar. The ones that shoot bullets are quite interesting. While most do fire the same slow-moving pellets, the patterns they produce are unique to the enemy that fired them, and that’s unique to that particular stage. I vastly preferred this over having stronger enemies that have the same behaviors as lower-tier grunts.

Another thing to note is that there is no randomization in the way enemies spawn. It’s all about reacting and knowing where the bullets are coming from. You’ll have to manage your dash properly, or else you’ll be at the mercy of enemy bullets. This is what I liked most about the game.

As for the boss fights, you’re either going to love or hate them in Wildcat Gun Machine. This is due in most part to the fact that bosses are really good at keeping you on your toes. This is also where the game’s biggest faults start to show too. There is nothing stopping you from staying very far away and shooting at an enemy you cannot see. This is a very boring way of beating bosses but if the game allows it, so be it. I’d imagine the ideal way was to stay close to the boss and continually adjust according to their attacks. But again, some players will choose safety over aggression if given the chance.

The game’s 2D art style is impressive, to say the least. The demons are highly detailed and the demons explode in satisfying ways. This brings up the question of why then was the main character a chibi sprite where everywhere else she is as detailed as the demons we’ve been killing. It is such a disconnect. The music does an ok job to get you pumped for the next encounter but it’s hard not to notice the game’s soundtrack constantly repeating itself, especially in the main dungeon crawl sections.

The game does a good job of letting you live out that power fantasy of going in between bullets and showing the forces of Evil who’s boss. But it came at the cost of an actual story and a reason to care beyond the gameplay.

The controls are responsive for the most part but it’s impossible to aim using an Xbox 360 controller on account of the lack of smoothness rotating the right thumbstick. It was such a chore getting the right angle that I would switch to mouse and keyboard for tougher encounters. More than that, there’s an issue of getting unintentionally caught up on door frames. It’s gotten so bad that I had to learn to avoid getting close to doors whenever I can. There’s also a small glitch that allows you to spam your dash. These may be small issues but together they are more annoying than they should be as individual problems.

Overall, Wildcat Gun Machine is a decent shooter. There are aspects of the game that feels unpolished or even rushed but the core gameplay loop is fun and that is what should ultimately matter. Hopefully, the game gets better through patches. Cause as it is right now, it’s only worth a single 6-8 hour run with hardly any reason to go for a second or more. 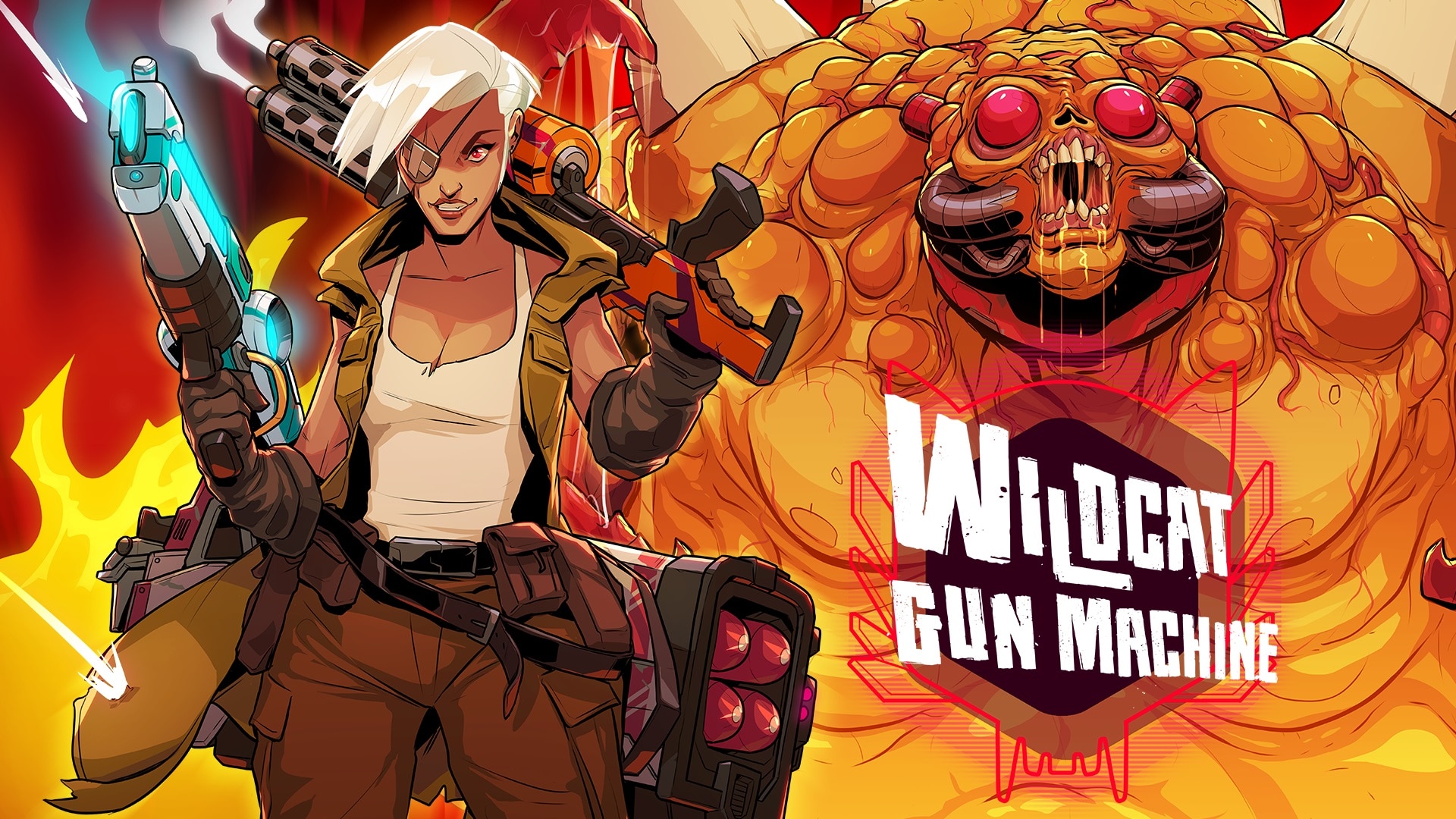 Wildcat Gun Machine – Review
Score Definition
We tell you, it’s a good game! It’s not average! It might have some problems here and there, but you have to admit it is a “Good” game.
Pros
Excels in moment to moment combat instances
Intense boss battles
Satisfying combat puzzles
Impressive visuals
Cons
Unpolished in some areas
Guns can feel underwhelming at times
Beyond the combat, there's nothing much else to it
The main character's out-of-place chibi appearance
7
Good