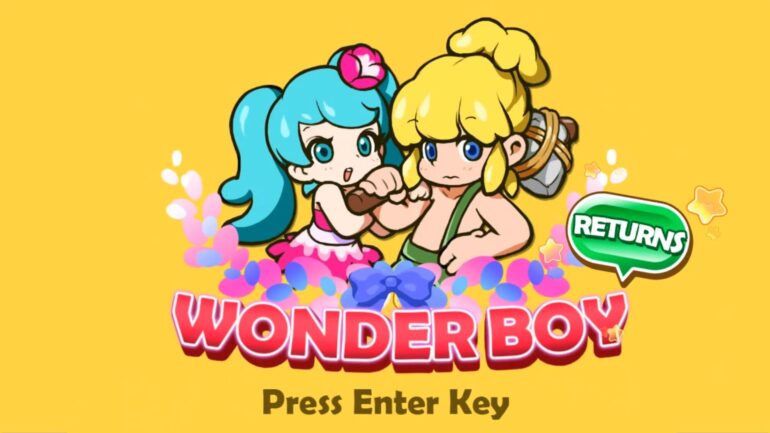 I didn’t think there would be a day that I would get to see a Wonderboy remake but it looks like that time is now. Wonderboy, which was also known as Adventure Island, has been wonderfully (see what I did there?) remastered for the PC and PS4. Let’s see if it’s worth going back memory lane or not. 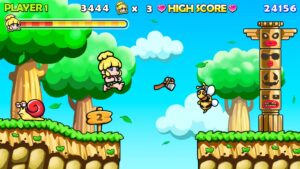 Wonderboy Returns is an action platformer game where your goal is to get at the end of each level and survive. Along the way, you need to pick up food to replenish your hunger because the moment that your hunger bar is depleted the game ends. You must also avoid bumping into enemies as this is a guaranteed death. You also get a weapon in a form of axe that you get by cracking an egg. I know that this may all sound ridiculous now, but that’s how the game really is and it will be hard to explain it without sounding ridiculous.

In terms of story, it’s very simplistic in that you’re venturing out into the world fighting monsters. Along the way, you’re trying to save your one true love from the devil boy that took her away. This was how plots were made back in the day, simple yet effective. If you have played the original Wonderboy  then you know what I am talking about.

Even though this is a direct port of the original Wonderboy, there are certain features that were added to this remake. One of which is the addition of new playable characters that can be unlocked by meeting certain conditions while playing the game. You can choose from three different characters which are the New Wonderboy, Classic Wonderboy and Tina, the girl that you were trying to save. 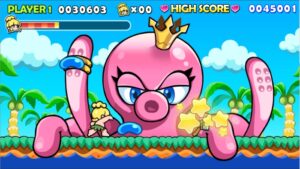 Another feature they added was the levels of difficulty that the game provided. You can choose from either Easy, Normal or Hell mode. Easy starts you off with 10 lives per level while Normal and Hell starts you with 3 lives per level. The Easy mode was such a breeze I finished all 10 levels of the game in just about 4 hours.

I really love the overhaul on the graphics. It’s so vibrant and colorful and yet it still has the essence of the environment from the original game. The art is very well drawn and the food were drawn beautifully that you would be tempted to grab something to eat while playing the game.

They also updated the music which was very upbeat and fast. It really wants you to go with the tempo and play the game in an adrenaline rush. I wish though that there was an option to use music from the original game. I think that having that would have upped the ante on the nostalgia factor. Plus the new music could somewhat be annoying in other levels of the game because it doesn’t seem to match the environment it’s placed on. They would also reuse the same music file every after 3 levels or so. I don’t mean to say that each level should have its own music but the variety of music played could have been more than just 3. 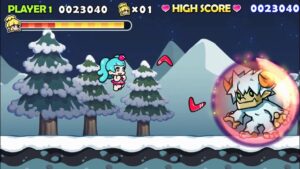 Another thing I noticed that they did not get from the original was the upgrade in power-ups. I remember in the classic game where Wonderboy would throw out hearts after you upgrade it from the axe or at least they looked like hearts to me. Anyway, the upgraded power-up would have made Wonderboy able to destroy rocks as well but they opted to remove that from the remake.

Wonderboy Returns is a fun game and definitely makes you reminisce those years when games were simple and yet complex at the same time. I admire the developers for making this remake but there is not that much incentive in replaying the game once you’ve completed everything. Players of today would also complain about a character that dies instantly once touched by enemies, but I do believe that’s what make games of long time ago so challenging.

I don’t have a problem with that at all. My problem is that they really didn’t add any other interesting features that would want me to replay the game. The challenge mode is basically just the game and you just try to test how far you can go with 3 lives but there really is not much else to do with this game.  My suggestion is to wait for this game to go on sale rather than buy it at full price but if you have some extra cash to spare then go ahead and get this one.

IT’S A KIND OF GAME THAT MAKES YOU PONDER ON WHAT-COULD-HAVE-BEEN.
Read our Review Policy here to know how we go about our reviews.