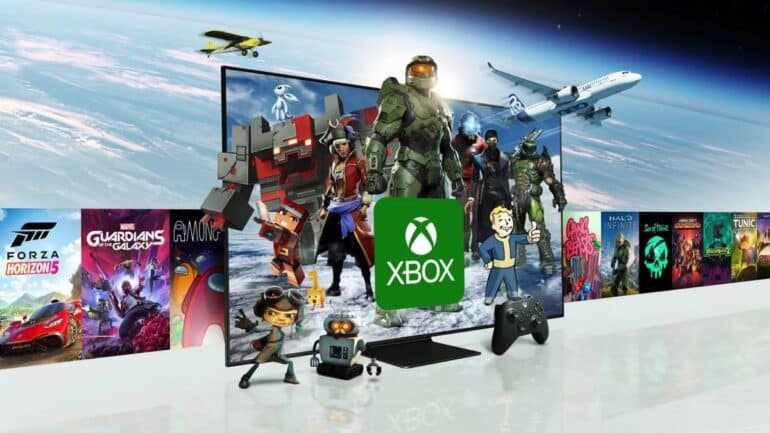 Microsoft has announced that the Xbox App is coming to a new platform soon. They have also made a few other announcements just before Summer Game Fest and Xbox and Bethesda Games Showcase.

Xbox App To Be Available on Smart TVs Soon

Xbox is now partnering up with Samsung to bring the Xbox App to the Samsung 2022 Smart TVs. Owners will be able to play hundreds of cloud-enabled games without a console needed. They can play hundreds of games in the Game Pass Ultimate library and Fortnite without subscription needed.

According to Microsoft, playing the Xbox games on the Samsung 2022 Smart TVs will be seamless. It will be just like using any streaming app on the TV. In order to play, just access the Xbox App from the Samsung Gaming Hub or Media Hub and just log into an existing Microsoft account. Connect a Bluetooth controller and it will be smooth from there. This all starts on June 30, 2022.

Xbox Game Pass Ultimate members can get access to a lot of cloud-enabled games.

Xbox has also confirmed that they are now going to offer game demos soon. They have created Project Moorcroft, a program that will bring fun and discovery of playing new, curated demos of upcoming games to Xbox Game Pass members.

This program will start rolling out within the next year. It will focus more on providing independent developers from around the world more opportunities to build hype for their games. Developers who will participate will be compensated and will also see how their demos perform. This is to compete with the recently launched new PlayStation Plus scheme.

Microsoft also shared a few other announcements like Xbox Cloud Gaming has expanded to Argentina and New Zealand. They can now play hundreds of games if they are members of Xbox Game Pass Ultimate on Apple and Android phones and tablets, PCs, Xbox consoles, and soon on Samsung 2022 Smart TVs.