Seven titles will be added! 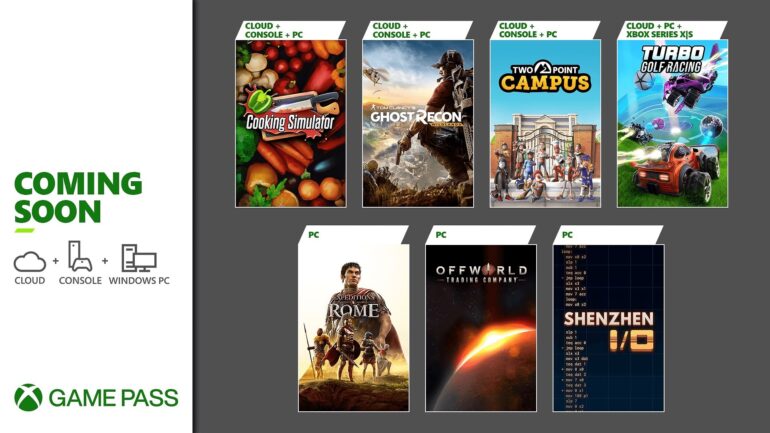 Seven titles have been announced that will be available on Xbox Game Pass August 2022. The first half of August will include a title from Ghost Recon, golfing with racing, managing a campus, and more. One of the seven are now available to download today as well. Check them out below.

Ghost Recon Wildlands is now available to download for Cloud, console, and PC. Players can create a team with up to three friends to experience the game, the ultimate third-person military shooter set in a massive, dangerous, and responsive open world. The US Special Forces team Ghosts are tasked to combat the Santa Blanca cartel and save Bolivia.

Shenzhen I/O will be available on PC this coming August 4, 2022. This is an open-ended programming puzzle game that challenges players to build circuits using different types of components. Inspired by real-world electronics engineering.

Turbo Gold Racing will be available on August 4, 2022 on Cloud, PC, and Xbox Series X/S. It will be available on day one with Game Pass. This is an arcade-style sports racing game for up to eight players online where you drive a car, slam into oversized golf balls, and race to the finish flag.

Two Point Campus launches on August 9, 2022 for Xbox Game Pass August 2022 on Cloud, Console, and PC. It will also be available on day one with Game Pass. Build the university of your dreams, hire staff, and run it like a boss.

Cooking Simulator launches on August 11, 2022 on Xbox Game Pass for Cloud, Console, and PC. Players will be on a realistic kitchen equipped with all kinds of utensils and stands. Unlock and master over 80 recipes or use dozens of lifelike ingredients to cook everything you like.

Expeditions: Rome will be available on August 11, 2022 for PC. Conquer lands and navigate political intrigue in this turn-based RPG. Control your Praetorian party, guide your legion to victory, and choose your own path in a story where every decision matters.

Offworld Trading Company also launches on August 11, 2022 for Xbox Game Pass for PC. In this game, Mars has been colonized and now Earth’s greatest corporate titans have been invited to build companies to support it. The contest is to control the market and be on top.

Five titles will be leaving Xbox Game pass on August 15, 2022. Use your membership discount to save up to 20 percent on the games you want to keep.