There are two titles that are too good to pass up have finally arrived on Game Pass. 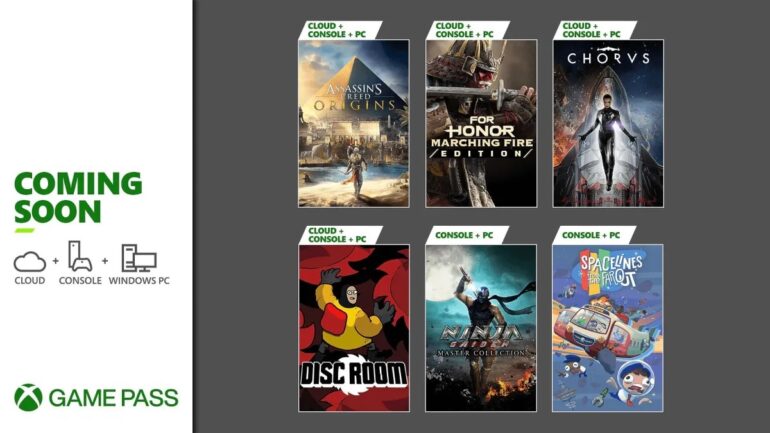 Six new titles are joining the Xbox Game Pass June 2022 lineup and it will include six titles this time around. It will be available on PC, Xbox consoles, and Cloud. Check out the new titles that will join soon starting tomorrow:

For Honor: Marching Fire Edition will be available on Game Pass starting on June 1, 2022. It will be on Cloud, Consoles, and PC. Play with friends and other players in PvE or 4v4 PvP modes. Gain access to several unique customizable Heroes across four factions.

Ninja Gaiden Master Collection will be available on June 2, 2022 for Console and PC. Try out three games from the Ninja Gaiden series in one solid collection. All of the previously released game modes and DLC costumes for each game will be included in it. Play as Ryu Hayabusa, and other characters in this awesome series.

Assassin’s Creed Origins will be available on June 7, 2022 for Cloud, Console, and PC. This Assassin’s Creed entry is set in Ancient Egypt and the beginnings of the Assassins. Explore the Great Pyramids, sail the Nile, and uncover dark secrets.

Chorus launches on Game Pass this coming June 7, 2022 for PC, Cloud, and Console. Take on the role of Nara and join her quest to destroy the dark cult that created her. Gain access to powerful weapons and mind-bending abilities in this evolution of the space-combat shooter. Join her and Forsaken, the sentient Starfighter, in exploring ancient temples, and fighting enemies in zero-g combat.

Disc room will be available on June 27, 2022 for Cloud, Console, and PC. This game is set in the year 2089 and a giant disc has appeared in the orbit of Jupiter. Take on the role of a brave scientist and go exploring this sprawling intergalactic slaughterhouse.

Spacelines from the Far Out joins Game Pass on June 7, 2022 for Console and PC. This game is a roguelike co-op management game about airlines in space. It features unlockable spaceships, upgrades, characters, and customizations. Solve randomly-generated challenges, join trips, and itineraries.

By June 15, 2022, a few titles will be leaving the Game Pass library when Xbox Game Pass June 2022 arrives. Remember, players can buy the game with 20 percent discount to keep them in the game library.