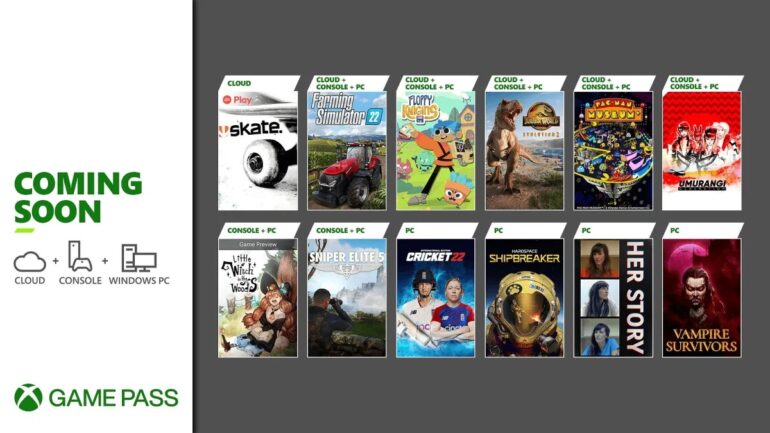 Microsoft reveals the second half lineup of Xbox Game Pass May 2022.

More titles are coming to Xbox Game Pass with this new lineup of free games to download starting today. There are 12 new titles to download including games that lets players train dinosaurs, try out farming, skate in a park, visit a museum, kill Nazis with a sniper rifle, and many more.

Her Story is now available on PC. This game is said to have relaunched an entire genre. This an award-winning mystery game made by Sam Barlow the writer and designer of Silent Hill: Shattered Memories and also the creator of Telling Lies. The game tells a story of a woman being interviewed seven times by the police and search the database and explore authentic clips to solve the mystery of her story.

Jurassic World Evolution 2 is now available on Cloud, Console, and PC. The sequel to the popular and successful original Jurassic World Evolution, which introduces new features like a new campaign and the Chaos Theory Modes. It also has new customization options and new dinosaurs to explore like the flying and marine ones.

Little Witch in the Woods is a game preview for Console and PC. It will also be available on day one with Game Pass. Ellie the apprentice witch is the main character of this game. Players will be exploring the mystical forest, help the residents, and experience the everyday life of a little witch.

Skate is now available on Cloud via EA Play. Players can skate anywhere and get chased by security guards just like in the old days. Use popular skate tricks to impress the crowds, ride with pros, find skate shops to upgrade your gear, and make some spots in the city your own.

Umurangi Generation Special Edition will be available on Cloud, Console, and PC. It will also be available on day one. It is a first-person photography sandbox set in the retro future city of Tauranga, Aotearoa during an impending crisis. Players will be taking on the role of the Tauranga Express courier to travel around Tauranga and taking pictures and documenting the world and its reality.

Farming Simulator 22 will be available on May 19, 2022 for Cloud, Console, and PC. This new iteration offers new gameplay features, more content, and more player freedom than ever before. New features include mulching or stone picking, improved build-mode adding greenhouses and beehives, and a new character creator.

Vampire Survivors launches on PC this coming May 19, 2022. Fight against tons of monster hordes, make the right choices or just rely on the skills and favorite weapons to gain favor in battles and survive the night.

Floppy Knights will be added to Xbox Game Pass on May 24, 2022 for Cloud, Console, and PC. It will also be available on day one with Game Pass. Players take control of inventor and robot arm Phoebe and Carlton fighting together in turn-based battles. Build the perfect deck, make the perfect card combo, and lead the Floppy Knights to victory.

Hardspace Shipbreaker will be available on May 24, 2022 for PC. It will also be available on day one with PC Game Pass. Pilot a shipbreaker that is equipped with cutting-edge salvaging tech to carve and slice various types of derelict spaceships in zero-g to recover valuable materials. Players must be careful of their tools though because it could trigger an explosive chain reaction and cost a lot. Upgrade gear to be able to take on better contracts in order to pay the debt to LYNX Corporation.

Sniper Elite 5 will be added to Xbox Game Pass on May 26, 2022 for Console and PC. It will also be available on day one with Game Pass. Another great entry to the Sniper Elite series with a new enhanced kill cam. Fight through immersive maps with many real-world locations captured in stunning detail and a new improved traversal system that allows players to explore more.

Cricket 22 gets added to PC Game Pass on May 27, 2022. Play the most comprehensive cricket game with PC Game Pass. Enjoy more licenses, a narrative-driven career mode, and 4K visuals. It has new control options making it more accessible to players of all skill levels.

Pac-Man Museum+ will be available on May 27, 2022 for Cloud, Console, and PC. It is also available on day one with Game Pass. Enjoy 14 legendary titles in the series. Try out the iconic original arcade classic with a variety of other play styles from over 40 years of Pac-Man history.

There will be some titles that will leave the Xbox Game Pass library soon so better try them out while you still can. Check them out below: