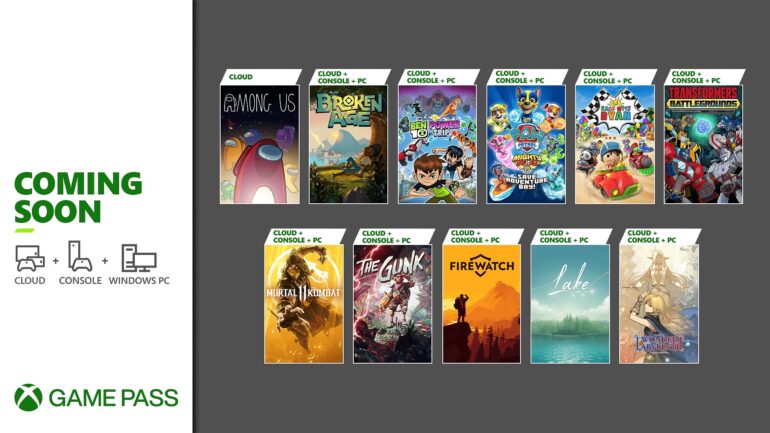 Microsoft has revealed more additional titles that are coming to Xbox Game Pass to close out the year 2021 and it includes popular titles like Mortal Kombat 11 and more.

11 titles will be added to the Xbox Game Pass library starting December 15, 2021 and it includes triple A and popular titles of this year like Among Us, The Gunk, Mortal Kombat 11, and more. Aside from that, four titles are now coming to PC Game Pass on day one like Pigeon Simulator, Sniper Elite 5, Trek to Yomi, and an unannounced game made by Hugecalf Studios.

Among Us (Cloud) – December 15: This popular title will be coming to Xbox Cloud Gaming with Game Pass Ultimate. Players will be playing together with 4-15 other players online or via local wi-fi. Play together to survive or be one of the Impostors with the ultimate goal to kill everyone in the spaceship.

Ben 10: Power Trip (Cloud, Console, PC) – December 16: Players will be slipping on the shoes of Ben 10 as he fights Evil Hex who has cursed all of Europe. Explore a 3D world that has combat, puzzles, and secrets to find.

Firewatch (Cloud, Console, PC) – December 16: Single-player, first person mystery game that is set in the Wyoming wilderness. Your job is to keep the wilderness safe and look for smoke, which is a sign of fire. Your only emotional lifeline is a person on the other end of the handheld radio you are constantly talking to.

The Gunk (Cloud, Console, PC) – December 16 Day One with Xbox Game Pass: This game focuses on two space haulers who are looking for ways to make money when they land on a planet untouched by any modernization or human intervention. They find alien plants and other valuable resources and it seems they actually found what they are looking for: a gold mine.

Lake (Cloud, Console, PC) – December 16: The year is 1986 and Meredith Weiss is taking a break from her career in the big city. She delivers mail in her hometown Providence Oaks and tries to blend in. Players will be the ones to choose how Meredith gets to experience her two weeks and face the quirky community of Providence Oaks.

PAW Patrol Mighty Pups Save Adventure Bay (Cloud, Console, PC) – December 16: A few pups get powers from a fallen meteor but it has also made Adventure Bay a mighty mess. It is now up to the Pups to use their powers to rescue everyone and repair the town.

Race with Ryan (Cloud, Console, PC) – December 16: Drive with Ryan and his friends including Combo Panda and Mo. Race to the top in Career Mode or play together with friends in 2-4 players split-screen races.

Record of Lodoss War: Deedlit in Wonder Labyrinth (Cloud, Console, PC) – December 16: A 2D action-exploration Metroidvania-style game developed under close supervision of original creator Ryo Mizuno. It shares the unknown story of Deedlit and the events that led up to Record of Lodoss War: Diadem of the Covenant.

Transformers: Battlegrounds (Cloud, Console, PC) – December 16: Megatron invades Earth and is now close to capturing the Allspark. It is up to Bumblebee and the Autobots to find a new commander to help restore peace.

There are five titles that will be leaving the Xbox Game Pass library soon. Check them out: