Here's the second half of the freebies! 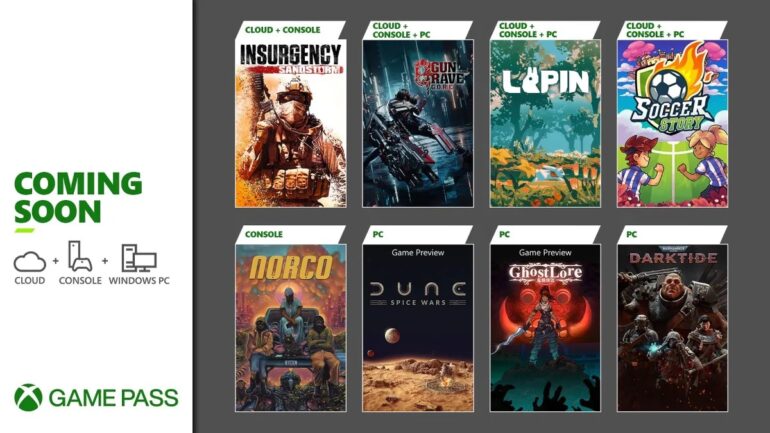 There are eight new titles that will be added to the Xbox Game Pass game library. It includes a detective game set in 16th century Bavaria, a sci-fi adventure, a strategy game obsessed with spice, an Eastpunk action-RPG, a 2D platformer, a Gothic point and click narrative adventure, a stylish third-person shooter, and more.

Pentiment is now available today and on day one with Game Pass for Cloud, Console, and PC. Players will take on the role of the journeyman artist Andreas Maler in a 16th century Bavaria. In a town of Tassing, murder and scandals are happening and the innocent artist is caught in the middle of them.

Somerville is now available today and on day one with Game Pass for Cloud, Console, and PC. This is a Sci-Fi adventure grounded in the intimate repercussions of a large-scale conflict.

Dune Spice Wars (Game Preview) launches on November 17, 2022 for PC. This is a 4X real-time strategy game set in Frank Herbert’s groundbreaking Dune universe. Players must lead their factions and battle for control and dominance over the harsh desert planet of Arrakis. A new update is also launching on the same day, adding new layers of strategy with military flying units and new buildings.

Ghostlore (Game Preview) launches on November 17, 2022 for PC. This is an Eastpunk Action-RPG where players fight against monsters based from Southeast-Asian folklore. Its gameplay is inspired by classic ARPGs like Diablo 2 and Titan Quest.

Lapin launches on November 17, 2022 on PC, Console, and Cloud and also available on day one with Game Pass. It is a 2D platformer game featuring a group of rabbit explorers. Players must help Liebe and her friends explore the world with precise control.

Norco launches on November 17, 2022 on Console and Cloud. This is Southern Gothic point and click narrative adventure game. Players are set to find Blake, the brother of the protagonist that has gone missing after the death of their mother. Follow a fugitive security android in order to find clues.

Gungrave G.O.R.E. will be available on November 22, 2022 on PC, Console, and Cloud and available on day one with Game Pass. Stylish third-person shooting meets close-range martial arts, creating seamlessly flowing action as players crush enemies in a gory ballet of bullets.

Insurgency Sandstorm launches on November 29, 2022 on Console and Cloud. Players will be battling in war-torn environments of a contemporary conflict via a series of intense co-op and PvP multiplayer modes.

Soccer Story releases on November 29, 2022 for PC, Console, and Cloud. It will be available on day one with Game Pass. This game is a physics-driven adventure RPG where every problem can be solved with the magic ball.

Warhammer 40,000 Darktide for PC will be available on Day One with PC Game Pass. It will be released on November 30, 2022. A new co-op focused experienced from the makers behind the Vermintide series. As Tertium falls, Rejects Will Rise.

Here are the titles that will be leaving the Game Pass library later this month.