Several titles coming to the subscription service include It Takes Two, Minecraft, and more. 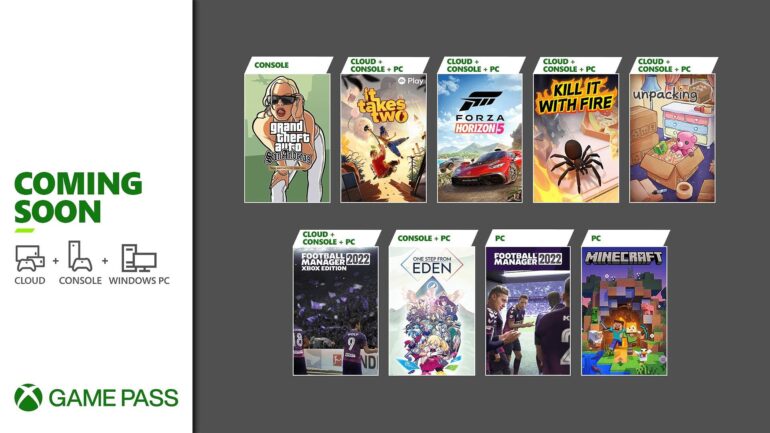 Microsoft has revealed the upcoming new titles that will be coming soon to the Xbox Game Pass library and it includes some of the most anticipated titles.

Several titles are coming to Xbox Game Pass library soon and these include some of the titles that many fans have been waiting for a long time. Also, starting in November 2, 2021, new Xbox Game Pass for PC members can be purchased for only $1. This particular membership is only for 3 months, but it is quite a good deal already. For only a dollar, they can already get Minecraft Bedrock and Java Editions, Forza Horizon 5, and more when they launch.

Minecraft: Java and Bedrock Editions for PC will be available on November 2, 2021. These versions are playable on Windows 10 and 11 and supports cross-play for console and mobile. Just launch the same edition as the Minecraft that they play with their friends.

Unpacking will be available on Cloud, console and PC on November 2, 2021 and will be a day one launch with Xbox Game Pass. This is a puzzle game with a story to tell with everyday and sentimental belongings as players try to decorate and organize each new space.

It Takes Two coming to Cloud, console, and PC with EA Play this coming November 5, 2021. Play together with friends in this wild co-op adventure. Combine both cooperative gameplay and a beautiful narrative of hardships in getting along with each other.

Kill It with Fire will be available on Cloud, console, and PC on November 4, 2021. A first person action game with the objective of hunting spiders and burn everything in your path. Use numerous types of powerful weapons, track the spiders, and burn them all.

Football Manager 2022 PC and Xbox Edition are both coming to Xbox Game Pass on November 9, 2021. Players take on the role of a football manager with many ways to coach their teams to win. Learn different types of footballing and instill it with your football club.

Forza Horizon 5 will be available on Cloud, Console, and PC on November 9, 2021. This will also be available on Xbox Game Pass on day one. Players will be racing through the vibrant landscapes of Mexico with limitless, fun driving action in hundreds of the world’s greatest cars.

Grand Theft Auto: San Andreas – The Definitive Edition will be available on Xbox consoles starting November 11, 2021. Players will be able to play one of the classic titles of the GTA series in high definition. It offers a lot of enhancements, new controls based on GTA V, new lighting and environmental upgrades, and more.

One Step from Eden launches on console and PC this coming November 11, 2021. This game combines deck-building and real-time action with rogue-like elements. Players can fight solo or play with friends in co-op.