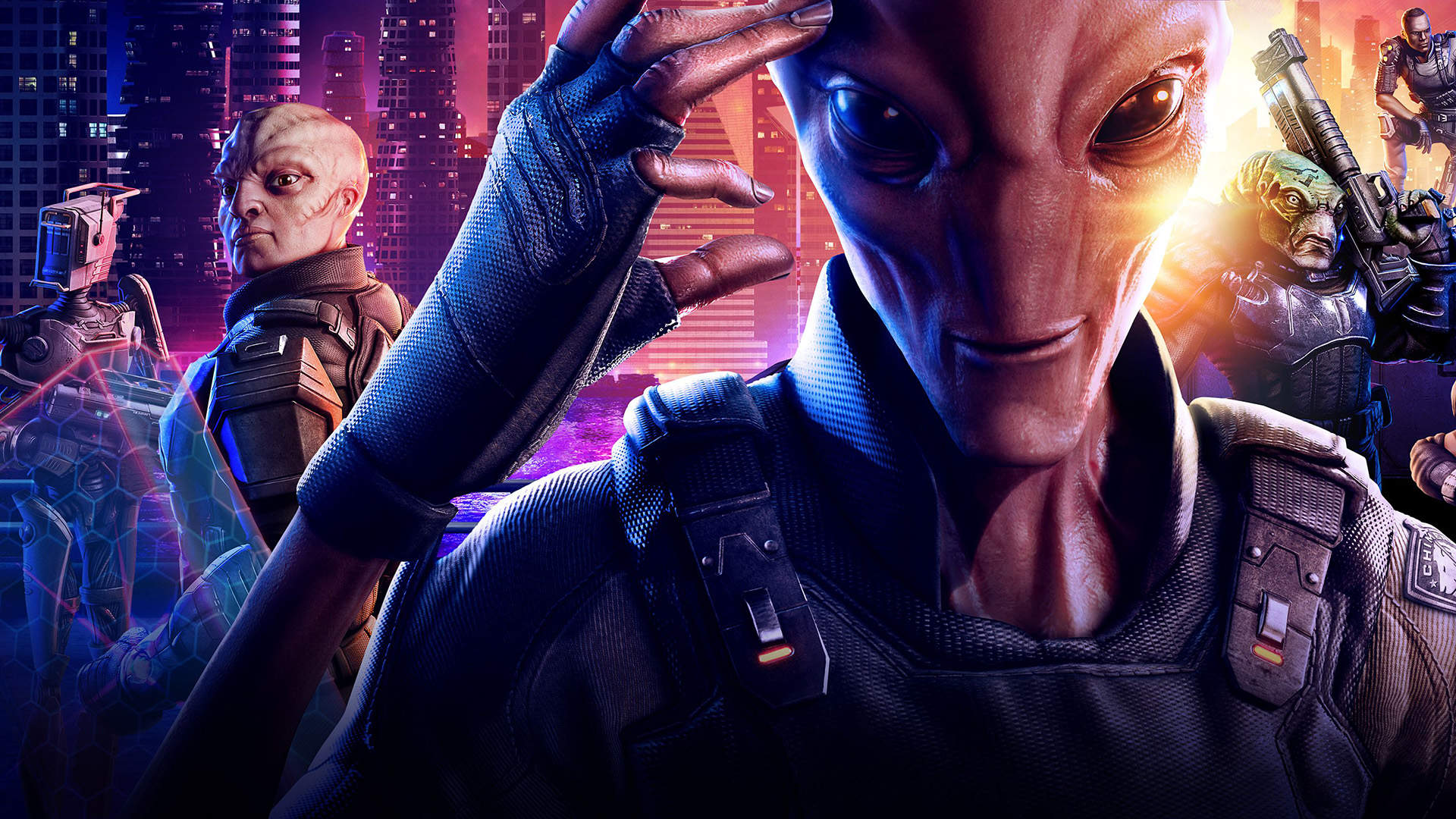 XCOM: Chimera Squad takes place 5 years after the War for Earth. Victory for humanity may have won us our freedom… but with it comes a new normal – one no was prepared for. In the years since ADVENT’s defeat, human-alien hybrids become part of society. Once soldiers used for war, these people must now find their place among the humans they once fought so fiercely against. Needless to say, tensions between the groups are rising. It’s only a matter of time before this powder keg explodes.

Enter Chimera Squad, XCOM’s solution that doesn’t involve bringing in soldiers to keep the peace. The squad is composed of volunteers from various backgrounds, many serve in armies for both sides. They have long set aside their differences to build a new future where humans and aliens alike can live in peace.

Following the unfortunate events at the start of the game, Chimera Squad is tasked to investigate 3 factions that may have played a hand in the crime. Each faction has its own unique set of soldiers and becomes increasingly difficult as the player takes down the other factions. With the last faction being the hardest to take down.

The start of each mission sees the player organizing their breach set-up. Some set-ups require items like breach charges or requiring the player to have a squad-mate equip with a special armor enhancement. Once the player commits to the breach, the whole squad goes in guns blazing. After the initial exchange, the board settles into the more traditional style of XCOM combat where units position themselves and try to outgun the opposition.

The encounter typically ends with the completion of all mission objectives. Failure, on the other hand, occurs when a squad-mate bleeds out or when the player fails the objective. At that point, the player may choose to redo the encounter or load a previous save.

A typical day in HQ sees the player managing every aspect of the organization from crisis management to R&D to even their officers’ health. In order to maintain their forces, the player must make use of 3 different resources – Elerium, Intel, and Credits. To acquire them, the player can either take missions, do investigations, or collect the weekly incomes of their field teams.

Research in the Assembly usually requires a good amount of Elerium. Field teams require Intel to set up and expand. Coincidentally, Intel is also the preferred currency within the gray market – a service that provides powerful upgrades. Credits are used to buy the weapons and gear that are essential to the officers on the ground. Almost every action within HQ takes a certain amount of days to complete, regardless of how many resources are available.

The City Map shows all the districts in the city. Each district contains its own level of unrest. At any given time, two more tasks will appear on the map. The player can only deal with one of them at a time. Skipping out on a mission or situation raises the unrest in that district. Should a district hit the highest level, anarchy within the city raises. Should the player fail to keep anarchy at bay, it is game over.

There are only 4 squad members available at the start of the campaign. What should have been a demonstration of their capacities can quickly turn into the opening salvo of a new city-wide conflict. With XCOM seemingly keeping their distance, the fledgling force is on a shoestring budget. The mayor’s office is no help either. They have their own fires to put out. Regardless, the APC can only carry 4 squad members. (plus up to 2 android back-ups just in case an officer goes down between encounters.)

In time, the squad grows to a maximum number of 8 members. There are actually more or less 10 volunteers to choose from. It’ll all boils down to what the player thinks is best for their kind of playstyle. Though I can see myself building a whole new team if and when another playthrough happens.

Members who are not active on mission may contribute in different ways. They can help speed up research in the Assembly or take on special missions at Spec Ops.

So far, the game is keeping my attention. The near-constant escalation of hostilities means that I have to be at the top of my game. I’m constantly reminded of late-game failure in the form of allowing the doom meter to rise uncontested. This actually happened to one of my playthroughs in XCOM 2 and I haven’t let it down since. I didn’t want to go through the same feeling of helplessness as I did before.

However, when I look back on nearly 30 hours of game time, I am reminded of how different this game is from the main XCOM games. In previous games, capturing an enemy alive meant that we have research material. In Chimera Squad, capturing 1 hostile equates to 20% of 20 points of Intel. Meaning that capturing 5 random enemies secures 20 Intel for that mission. I don’t know, captures feel less important now.

Another thing that I notice is the exclusion of special missions in the lineup. Currently, there are no missions that mix up the typical breach and assault-style. It’s just been the same since the beginning of the game. Speaking of which, the areas are so small that almost all the enemies are within vision range. In fact, the maps were so big in previous games that they often allow for multiple engagements. In Chimera Squad, we go in room by room to clear out encounters.

All in all, I think the lack of mission variety is what’s bugging me. I do hope they add more mission types in the future in the form of DLC.

In typical XCOM fashion, the rag dolls are a joy to watch. Some enemies go flying out the window, while others fall perfectly on top of chairs. Also, visual glitches have always been a part of the experience, but I don’t recall seeing this many bugs before. It may because I’m playing the game for the first time on PC or it’s something to do on my end. It doesn’t matter. The game shares many character designs from past games. At times, I feel like some of the models look the same way that does look back in XCOM 2. Maybe it won’t be the case in the next game. Who knows?

The background music is somewhat okay for this scale. Nothing too grand, nor ambitious. The sound effects do occasionally disappear at random intervals. I do notice that it happens most often during loading previous saves.

One final thing before wrapping things up. The game has a strange habit of loading the wrong sets of data sometimes. Some enemies would flat out disappear on load, while other times entire sets of furniture would fail to load. It’s just strange, to say the least.

In terms of where I am in the game, I feel like I am nearing the climax. Having defeated the 3 factions, the squad have finally forced the shadow organization, codename ATLUS, out of hiding. As of this review-in-progress, I am about to engage them for the very first time.

For the longest time, the game felt like it was stretching itself longer and longer, not by having unique encounters but by ramping up the difficulty of the missions. Taking down the first faction was easy enough, the second one took a bit of micromanagement. The third faction was bogged down in all sorts of missions with seemingly less progress for more effort.

Let’s see how everything ties together in the end.

Come back soon for our full review of XCOM: Chimera Squad.

Disclaimer: A PC code was provided by 2K Games for the purpose of this review.