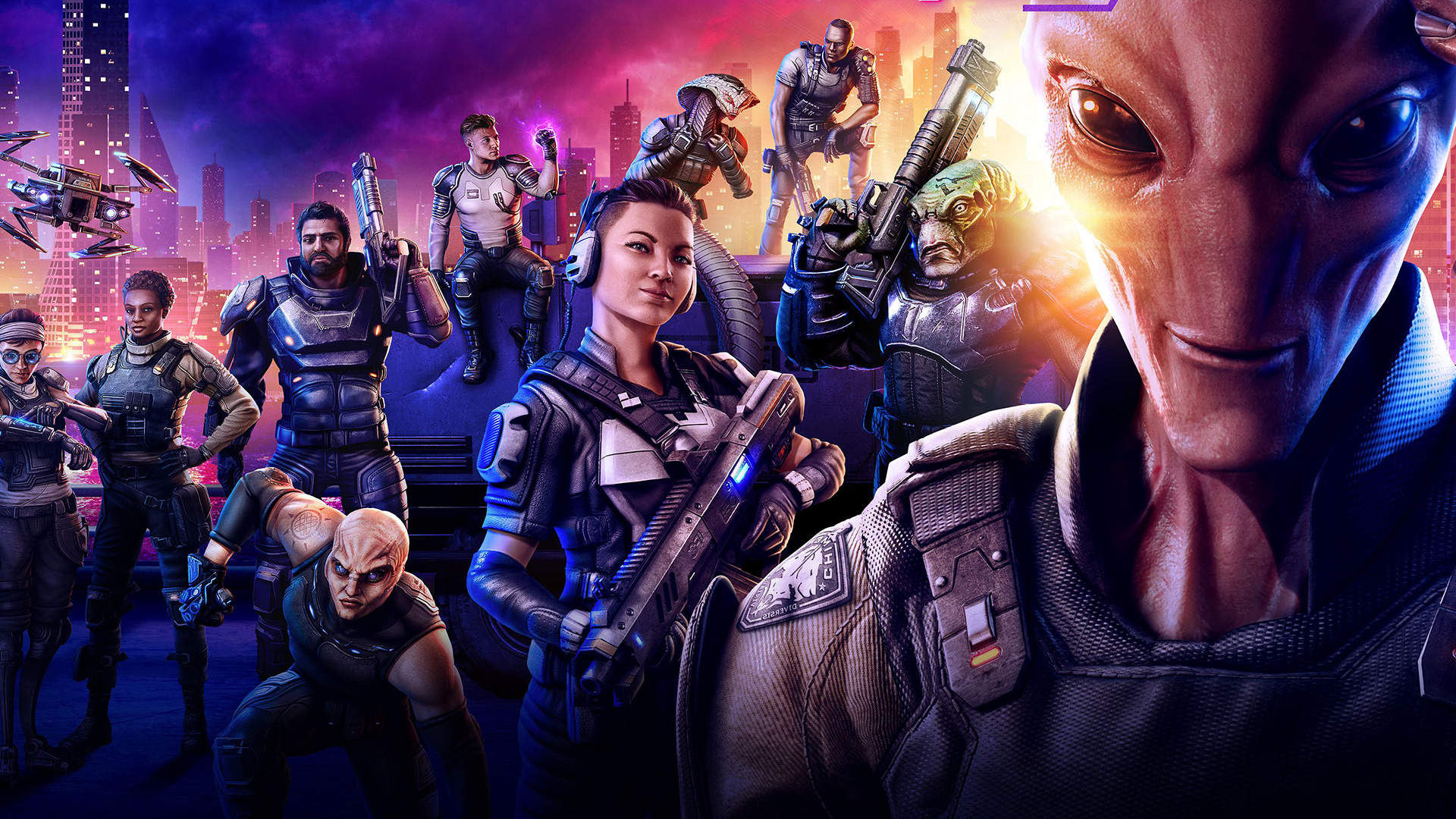 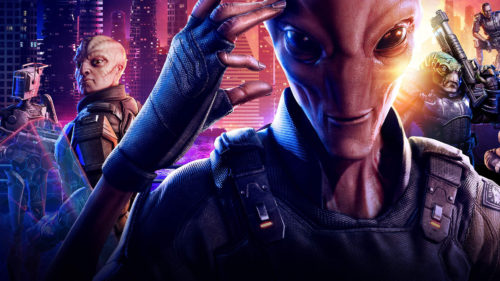 Winning the war against the Elders was a turning point in human history. For the first time since ADVENT took control of the planet, humanity was in control of its destiny once again. What no one could have guessed was the fact that we can no longer claim sole ownership of planet Earth. Human-alien hybrids walk among us; many of which fought for the very enemy we so ferociously fought against. The transition hasn’t been easy. The aliens believe that they don’t have a place among humans. While humans haven’t moved on from the events of the war. It’s only a matter of time until conflict envelops the new world.

It’ll take a special group of individuals to bring everyone together.

XCOM Chimera Squad is a follow up to XCOM 2. Set 5 years after the war of survival, the game sees the player take control of a fledgling arm of the XCOM program. The idea behind the newly formed group is to gather like-minded volunteers and try to reinforce City 31’s overwhelmed police force, 31PD. (or more commonly known as 3-1 PD) Keeping their distance, XCOM sets aside a shoestring budget for the squad to work with. It is now up to them to make something out of nothing, and build up a team worthy of praise.

At the start of every encounter, the player organizes his team of 4 around one or more breach points. The order in which they choose determines the team’s placement on the timeline. After the breach, the agents have an opportunity to initiate the attack on a room of enemies. Some enemies will be caught in surprise, while others are prime weapons in the direction of the breach. After the initial exchange, the team advances to the nearest cover, starting the tactics portion of the engagement.

At this point, the game switches back to the isometric tile-based movement XCOM games are known for. Using a combination of commands, the player is able to lead their agents with the goal of either subduing the assailants or otherwise killing them. The player and the enemy A.I. take turns casting skills and exchanging fire until either the player completes their objective or the A.I. eliminates the squad.

A mission may contain up to 3 encounters. It is important to know this as resource management is crucial in prolonged engagements. Should an agent go down in the line of duty, their allies must stabilize their condition before they bleed out. Otherwise, it will result in a game over. After the encounter, a friendly android takes the place of the injured agent, and the mission continues as normal.

Missions come in the form of direct assault, evidence gathering, VIP protection, or keeping civilians safe in the midst of a terrorist attack. All missions start in the breaching phase.

After the mission, the team heads back to Headquarters to continue the investigation against the 3 major factions of the game.

Headquarters is essentially this game’s version of XCOM base management. The very top tab, City Map, is where the player takes stock of the current situation within the city. Furthermore, the map’s divided into several districts that track unrest levels within that certain district. When a district reaches maximum unrest, the city’s Anarchy level rises by 1. Should the squad fail to keep Anarchy at a minimum, the council will lose confidence in Chimera Squad and dismiss them.

To aid the team, the squad is able to commission field teams for added support. There are 3 types of teams corresponding to the 3 main resources in the game – Elerium, Intel, and Credit. At the end of each week, the teams hand over resources to HQ. Higher rank field teams come with greater benefits. Fielding enough teams will allow the player to use abilities that stop unrest from growing. The idea is to keep unrest to a minimum while digging for leads that’ll point to the direction of the faction’s leader.

The City Map is also the place where the player chooses to do Missions and to resolve Situations. Situations just require the team to be present and actively aid 31PD with their jobs. Both advances the day to the next. It is also worth noting that on any given day, there will be multiple missions and situations. Unfortunately, the district the team ignores will further increase in unrest.

The other tabs are the Assembly, Spec Ops, Training, and the Armory. The assembly is where the team researches new tech using the Elerium they acquire. Coincidentally, having an agent will cut research down to half. Spec Ops offer a wide range of benefits. It requires the presence of an agent. Top ranking agents make use of even more powerful operations. Training is where agents work on themselves; improving their conditioning and unlocking their potential. Training is also the place where agents go to remove scars they might have gotten in combat. The armory is the place where the player assigns the team’s gear. On top of that, command gives out promotions within the Armory. It’s not as ceremonious as before but the skills are handy, nonetheless.

The bigger departure of the series comes in the decision to have well-defined characters instead of the cookie-cutter soldiers the games are known for. The starting agents do well enough on their own. However, they can’t be everywhere at once. Headquarters needs helping hands. Plus, it’s tough managing a standing team with many scars. In the course of the story, the player gets to choose among several other agents until they fill the roster of 8. Pleasant banter within the team reinforces how much effort is placed on character development. Oddly enough, the story moves along quite quickly regardless of who’s on the team.

The closest comparison I have with regards to the graphics is that it loosely resembles a lighter and livelier version of XCOM 2. The locations feel lived in, despite the fact that gunfire tears at the furniture. Visual glitches aren’t all that uncommon within the series, but it seems like the technology’s improved to the point that they’ve minimized some of the bigger issues. There is also quite a number of locations, meaning that encounters have at least some variety to them. Explosions and rag dolls are just a pleasure to watch as ever.

The techno soundtrack mixes well with the game’s urban setting. But the chill atmosphere that it creates clashes with the increasing level of intensity present in later parts of the game. The skill effects do the job well – emphasizing how powerful they can be. The same can also be said about the weapons in the game. There is something so satisfying about hearing that shotgun blast while watching the enemy’s health go down in a flash.

The story starts with Chimera Squad responding to a hostage situation at the museum. Godmother and Terminal are the first on the scene, followed closely by Cherum and Verge. After saving the mayor, the team prepares to head back to HQ. At that moment, an explosion goes off – killing the mayor in the process. Chimera Squad launches an investigation to find the ones responsible for the crime. The list narrows down to 3 opposing factions. Command decides to break them all up with the hope of finding a lead in the process. And thus starts a long campaign to bring the killers to justice.

the game’s replay value rests in the fact that the player won’t be able to control all available squadmates for at least a couple of playthroughs. Which is actually alright. This keeps the experience somewhat fresh when using a new team of agents.

The best thing about the game is the fact that it plays like good ole XCOM in most aspects. Sure, there are some changes here and there, but that’s what happens when a series transitions to something new. Now, if this was marketed as XCOM 3, I might find it too different for my tastes. Thankfully, that’s not the case.

The game suffers from occasional glitches. Not surprising given the series is known for such things. This is most apparent when the player decides to load a previous save. The state of the field may be different from what it was a moment ago. I’m guessing it’s something to do with the order of events. Sound effects can decide to cut off entirely. All of this is pretty tame compared to, let’s say… furniture and map assets disappearing for no reason. I hope there’s a fix for this in the future.

The thing I really dislike about the game is how the game handles boss encounters. XCOM days aside, there’s always something special about encountering a unique enemy with unknown battle specs. In Chimera Squad, however, the bosses are just base classes with extra health slapped onto them. It’s somewhat disappointing, to be honest. Furthermore, the story doesn’t change in any way, shape, or form depending on whether or not you arrest or kill the leaders.

The final set of missions also annoys me to no end. They trigger the moment the squad takes down the final faction. City hall comes under attack by the same groups of thugs we’ve been taking down the entire game. The big change here is that there just more of them than ever in each encounter.

At this point, I was expecting a twist worthy of the ending of XCOM 1. That never happens. Instead, the last mission of the game involves the team taking down the head of the shadow organization that was pulling the strings the entire time. The big boss did not even last until the end of the round before dying to my agents. That’s enough of that… stuff.

While Chimera Squad is not a proper sequel to XCOM 2, it does serve to push the story forward. It is its own standalone game in the XCOM series. I think that’s important to take note of. Did I enjoy the game? Yes. This was because the game’s intensity kept rising to the point that midway through the game, all the missions were ‘very difficult’. The base management is just as fun as it ever was. It’s also worth noting that the story has its moments. It’s not the high stakes veterans are used to. Still, I encourage them to try this game out.

Do I ever see myself coming back for more? Definitely. There is still another squad configuration that I need to make. At the end of the day, it’s an XCOM game. This game is on the standard of previous games, though with a quirk all of its own. I believe it stands up to others in the series.

I recommend this game to anyone’s ever played an XCOM-like game. Veterans and newbies alike will find something they might like, despite the game needing more polish. Just watch that Anarchy meter. The late-game pressure sneaks on you rather quickly.

XCOM: Chimera Squad – Review
Score Definition
When the issues of a game are rolled and stomped by its greatness, then it’s something to invest on if you have some spare.
Pros
More focus put on the story
Gradual increase in intensity
Stays true to the XCOM brand of squad-based tactics
A pleasant surprise
Scattered moments of squad banter
Cons
A little rough around the edges
Technical issues with the save states
Too many reused enemy types
Wonky mechanics/interactions
Terribly underwhelming boss battles
A more compact XCOM experience overall
8
Great