Ever wondered what would happen if the Legend of Zelda Breath of the Wild and Star Dew Valley had a love child? It would result into Yonder: The Cloud Catcher Chronicles. A game that’s part explorer and part farming simulator. A game that doesn’t really care where you go off into yonder.

Yonder is an open world sandbox game whose environment reminds me a lot of Breath of the Wild. It also has the calming ambiance of The Witness. It is a game where most of the time you walk near and far beyond to discover all the things that this game has to offer.

Your character, which you can customize, ends up getting stranded in the beautiful world of Gemea. A group of islands that is flourishing with all sorts of plants and wildlife. But something feels off in this world. In distinct places, there’s this purple cloud that people call the Murk. This Murk hinders you from getting into secret places and treasure boxes that are laid through out the land. Your character though has this ability to see Sprites. Mythical fairy creatures that can clear the Murk with the wave of their hands. You get your first Sprite companion when you first wake up in the game. In order to get the other Sprites, however, you will have to look into every nook and cranny. There are also times that you will have to do certain quests to obtain these cute little creatures.

As you go about exploring the land, you will come up to a little town that will help you get started. There are also quests that these people might give you so you can progress in the game.  These serve as side quests , which offer sweet rewards that will help you in your journey. Certain quests also unlock a skill for our young adventurer which will help him craft anything from bread to a whole animal pen.

There are about 7 skills to master and these are Cooking, Tinkering, Carpentry, Construction, Brewing, Farming and Clothmaking. Mastering these skills will help you build farms, bridges and just about anything that will make this land more accessible to you. There are also items that you need to craft to complete certain quests as well. This is why quests and crafting are the backbones of this game because they always go hand in hand in things that you do. Your character also gets this glowing compass which lights up the way to your next objective. But I feel like this feature is lacking because it doesn’t really point you to where you need to gather items or where to find certain NPCs to complete said quests. It only points you to the quest giver or to the next location of the quest. I think though that this is where the game wants to challenge you. To invite you to explore the world and discover everything on your own so that you can fully immerse in the game.

There are no currencies in the game but you can buy items from shops by trading the items that you have collected. As long as the value of the things you trade match with the things you want to get, then you will have a successful deal with the merchant.

If you have built a farm, you can store wild animals by befriending them and leading them back to your farm. To befriend them, you can gift them items that they want from you. It can be anything from a seed or a twine. I’m not really why some animals would want twine, though I guess this is not some normal world. The animals in this world are interesting and let’s just say whoever did them was very imaginative. I mean I came across a Spring Pig. It literally has spring growing all over its back with wild flowers and such. There’s even a dog bear that barks like a dog but has the huge body of a bear.

There doesn’t seem to be any enemies in this game. The wild animals are tame and the Murk doesn’t really hurt you. There is no reason for your character to die here because even when you jump off a cliff, our little guy just props open his umbrella to help him land safely on the ground below. The only thing I can think of where our character seems to “die” is when he jumps into the water. Apparently, our protagonist doesn’t know how to swim, so when he does jump, he just plummets into the deep abyss and the screen turns to black and resets to the nearest ground you came from. I’m surprised how he even survived the shipwreck if that was the case. Maybe the Sprite helped him to stay afloat, I can never be sure.

Gemea is a vast huge world and it can be intimidating to explore this beautiful landscape by foot. But have no fear, laden throughout the land are Sage Stones. These sage stones provide you with a test to see if you’ve learned anything from the game. Once you pass the test, these stones’ mouths open wide enough for our character to enter. When this happens, you are then transported to the fairy world where all the other Sage Stones are connected. You can then use the other Sage Stones to transport you into their respective locations in the land. There are also some stone altars in the game that also serves as a teleporter but they only open during a certain time of the day. Some open for the night, while some others open during the day. 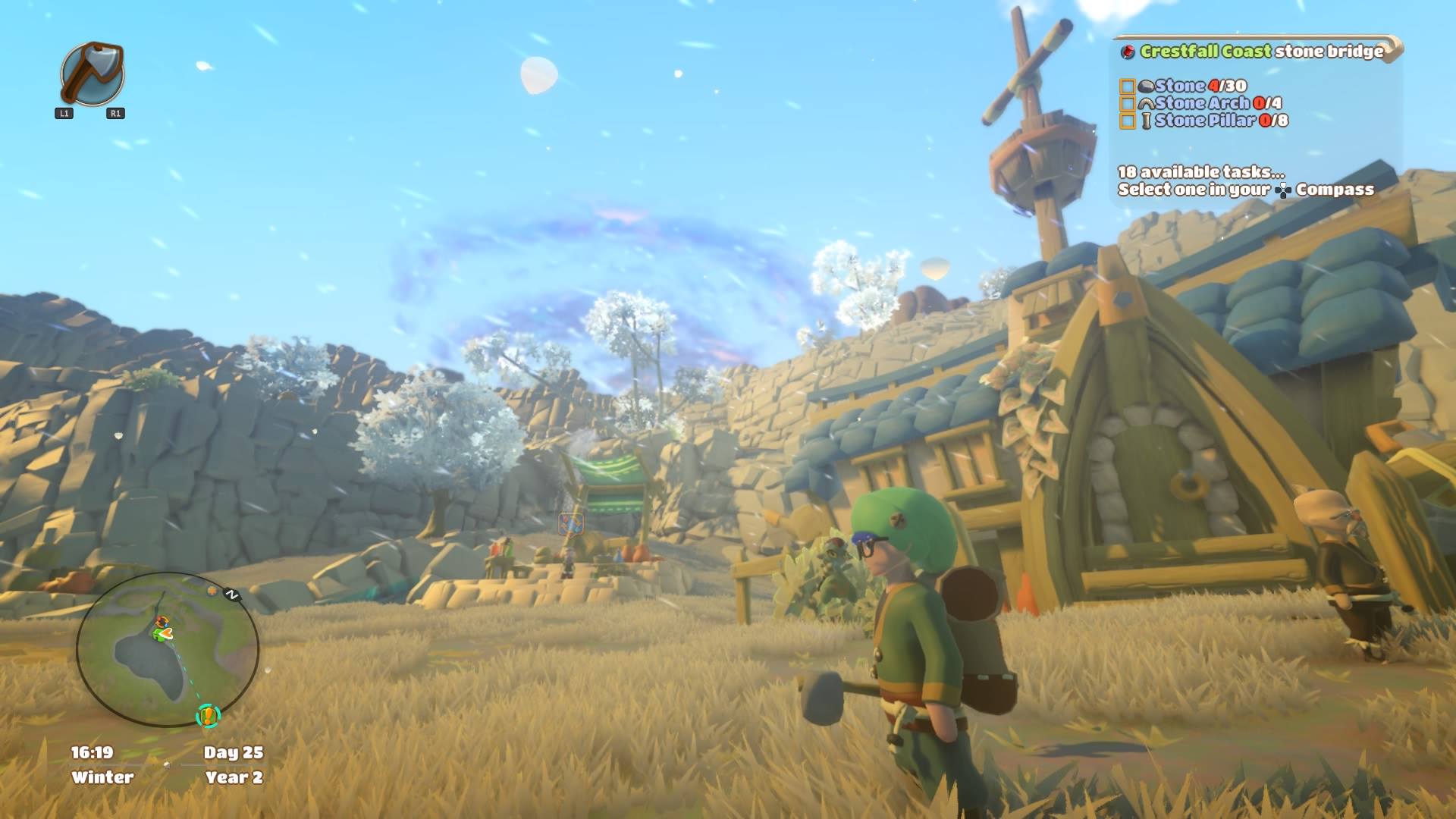 The game has a time and weather factor. You will experience night and day while you go exploring and sometimes you will get rain. Time moves very quickly and time and weather can also affect certain quests. For example, there are certain types of fish that you can only get during night time. Speaking of fish, you can get fish by using a fishing pole and it’s amazing how you can fish just about anywhere, even at a water fountain. I’m guessing they have a lot of fish on there.

You have also have other tools at your disposal so that you can collect items like wood and iron ore. There are also planting spots in the land where you can plant tree seeds so that they grow up into trees that you can then chop for wood. Items like vine that you can gather will also replenish as time passes by. So you won’t really run out of items as long as you just keep exploring and let time move on.

Yonder is a game that takes two of the best elements from other games. The beautiful landscape and the infinite possibilities of farming and crafting. A world where you can relax and at the same time be challenged by its many quests and obstacles. A game that you can take seriously but also have fun with it. A game that transports you into a mystical world of sprites and never-before-seen creatures. A masterpiece on its own right. If you are into this kind of gameplay, then I recommend that you get this game right away. 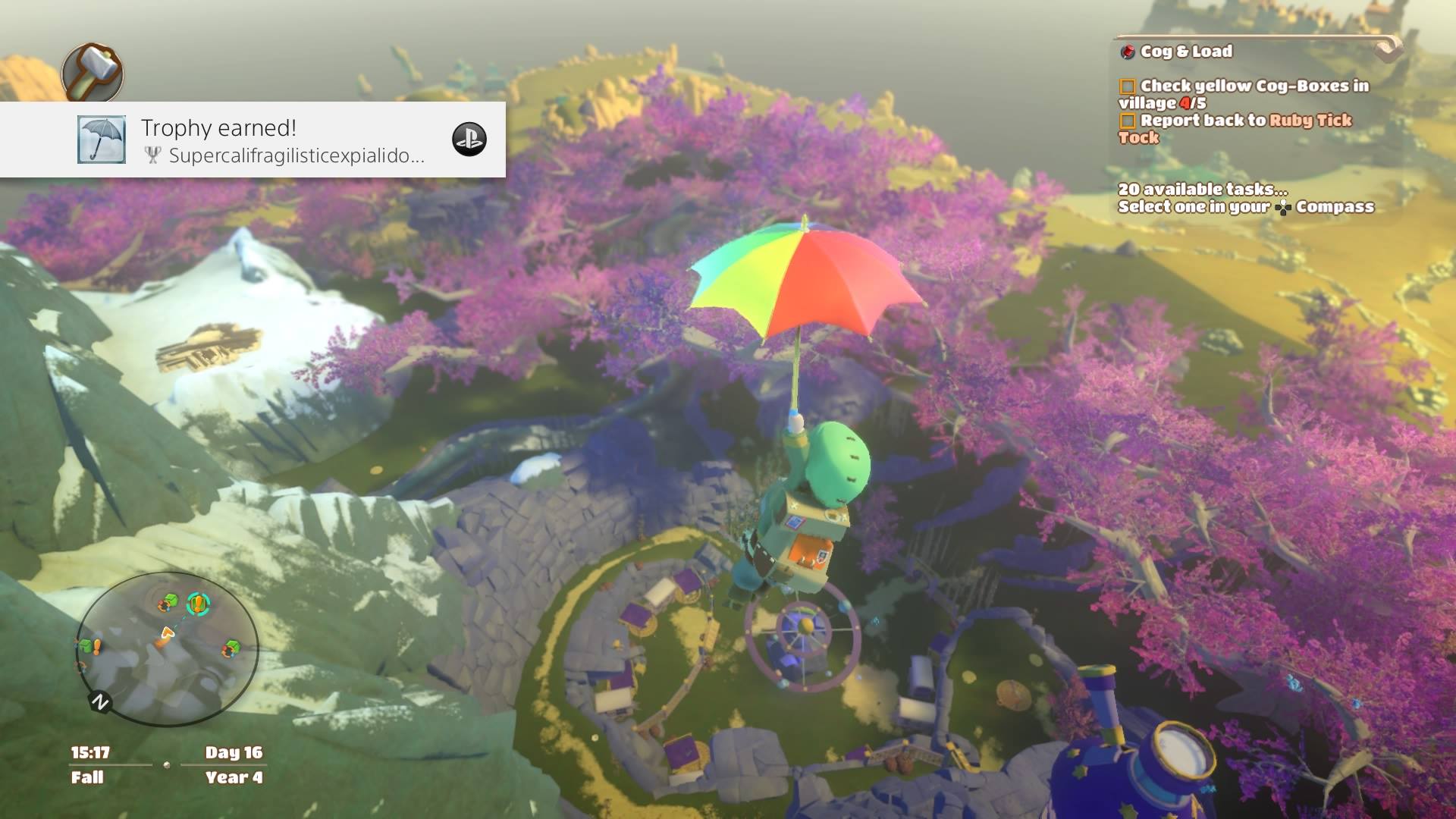 Yonder: The Cloud Catcher Chronicles Review – Catches More Than Clouds
Score Definition
May it be the likes of Shadow of the Colossus or Metal Gear Solid, if it’s quite there but not enough to push the boundaries, it’s still an awesome game.
Pros
Beautiful landscape
Unique creatures
Crafting and Farming
Challenging Quests
Cons
Can't Swim
9
Excellent