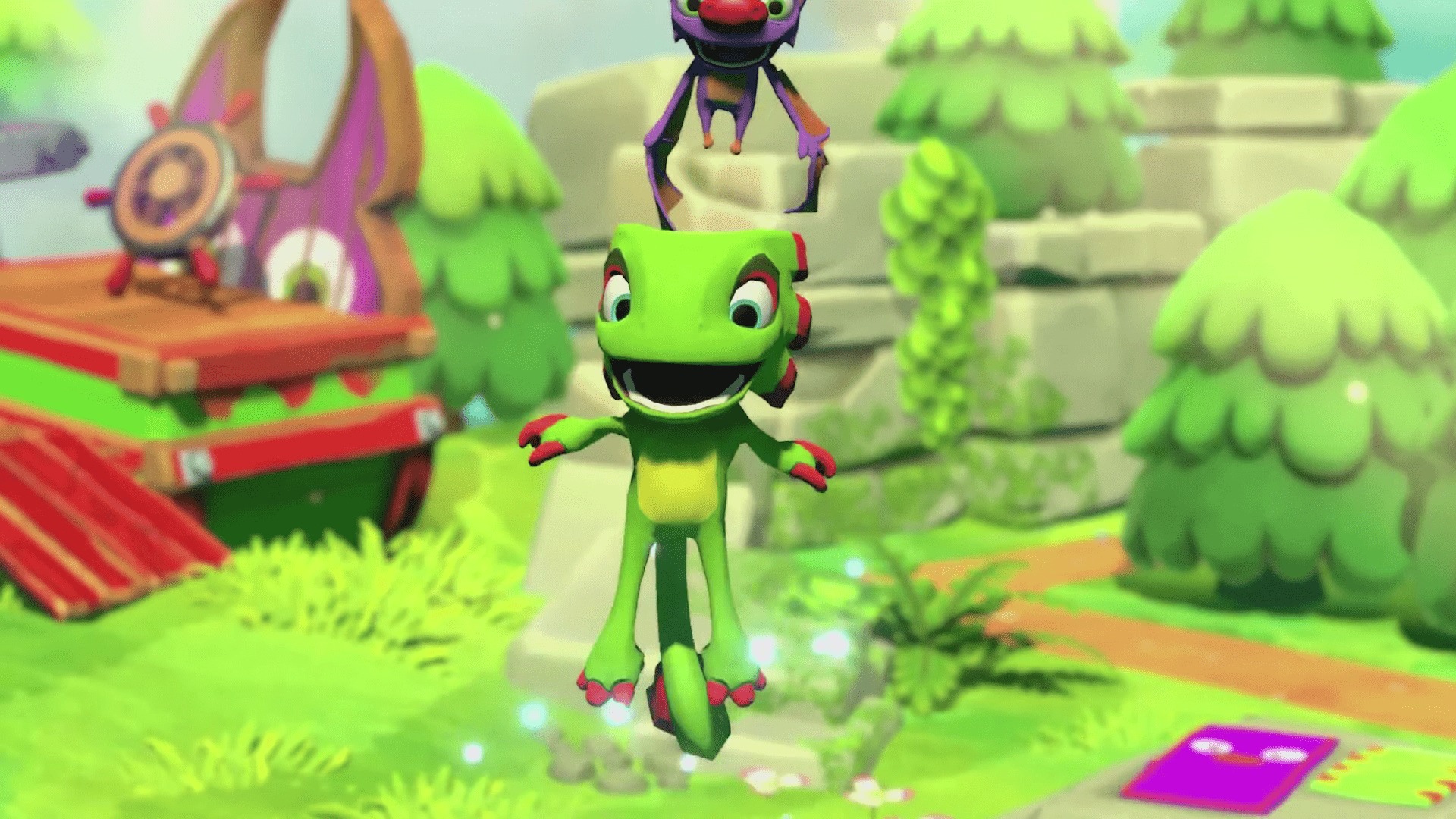 Yooka-Laylee and the Impossible Lair – Review 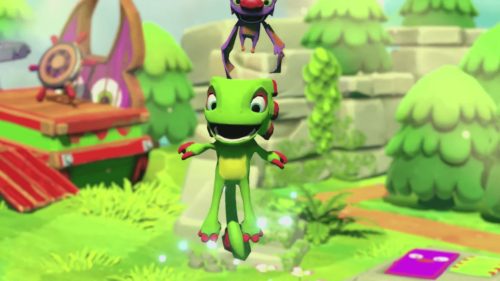 Yooka-Laylee and the Impossible Lair is a sequel to the puzzle platformer, Yooka-Laylee. The game itself is split between an overhead 3-D puzzle-like overworld and the numerous books spread throughout the map. The Overworld hosts a good number of challenges and secrets. The chapters are self-contained worlds that test Yooka-Laylee’s platforming abilities.

The start of the game sees our heroes facing off against the evil Capital B. Our resident baddie has taken over Queen Phoebee’s stingdom and threatens to enslave all of bee kind. Capital B runs Yooka and Laylee through his gauntlet known as the Impossible Lair. This sets up the Beettalion and what they are supposed to do. In a seemingly one-sided battle, Capital B quickly dispatches Yooka-Laylee and the pair are thrown to the Overworld. The queen then sets them off on a quest to recover the Beettalion with the hopes of retaking the stingdom back from Capital B.

Yooka-Laylee’s controls vary depending on their hit state. With the help of Laylee, Yooka is able to hover a bit in mid-air and is able to ground pound with left shoulder buttons. Taking a hit will force Laylee to wander aimlessly until they are reunited. However, if Laylee is separated for too long, she goes away until the player finds a bell and summons her. Without Laylee, Yooka can no longer hover nor ground pound. He’s far from helpless though, on his own Yooka is able to dash through enemies or tail whip them if he’s standing still. Double-tapping square allows him to roll farther with greater momentum. Lastly, pressing the right shoulder buttons allows Yooka to grab objects with his tongue to use as projectiles later.

Passing through checkpoints saves the number of quills collected up to that point. Upon death, the player loses the amount of quills equal to the amount collected after the last checkpoint. It’s a very forgiving system that allows players to experiment in as many approaches as they want without the fear of losing lives.

In total, there are 48 Beettalion bees that the player can potentially rescue. Though not required to finish the game, each bee in the player’s possession allows them to tank one more hit in the Impossible Lair.

The primary object in each book is to rescue the Beettalion member at the end of the level. Of course, that’s only half of the story. Scattered throughout the level are quills that the player can use to purchase hints from the Overworld or unlock tonics. At certain parts of the level, it is not all that uncommon to stumble upon a challenge quill that tests the player in exchange for a handsome amount of quills. The last collectible of note within chapters is the T.W.I.T. coins that are used to open up “paywalls”. There are a total of five T.W.I.T. coins per level, most of them require some kind of platforming to acquire.

Quills are needed to buy tonics that affect gameplay in some way or another. There are useful ones like a tonic that makes Laylee stay on screen for a little while longer before flying away. And there are more fun ones that makes Yooka’s eyes bigger. At the start of each level, the player chooses which tonic to use. This affects the quill multiplier at the end of the level. To put it simply, the more helpful tonics reduces the end-level quill multiplier. Getting tonics that somehow make the level or the controls more difficult, increases the quill multiplier.

The world outside of the books is known as the Overworld. It’s a hub world that contains its own set of puzzles and secrets. At the start of the game, the player is limited to only a certain area to explore. But through the process of opening paywalls and completing parchment challenges, the map steadily becomes more accessible. Multiple paths start to emerge, many leading to secret areas that hide tonics.

The Overworld is home to some very unique characters. The parchments can change the entire level layout after the player has cleared their challenge levels. There is also Trowzer the snake who owns those paywalls. If he’s not making a deal on his phone, he’s throwing some shade on modern games industry and its practices. Not far from the entrance of the Impossible Lair, lies the camp of Queen Phoebee and the Beettalion. For some odd reason, the more bees the player has under their command, the more it looks like a band camp. Actually, the queen herself arrives at one of the first dead ends of the game and explains the concept of using berries to manipulate chapters.

The chapters themselves can change attributes depending on the outside condition of the book. This is very evident early on when the queen tasks Yooka to throw an ice-berry onto a water-based level, turning it into an ice-themed one. The level layout remains mostly the same, but the change reveals paths previously unpassable in the previous form.

Another odd thing about the books is that there are many ways to work around them. Take this other level, for example. There is a certain point in the game where our heroes stumble upon a location in which the left side of the book is the entrance, and on the other side is the exit. The book is held down by bars so the only way to reach the other side is to complete the level. But here’s the thing, entering the same book reveals a new phase of the level.

The colorful graphics give off some of the most positive vibes in a modern game. Every location in each chapter somehow feels like a pop-up book, complete with all the layers of the background and the foreground. Enemies move with such exaggerated expressions and pose. Especially at the point of being eliminated from the scene, the wide-eyed expressions and the jaw drops are some of the funniest things ever.

The soundtracks complement the visuals practically every way. It is upbeat and energetic, but it doesn’t overwhelm the senses to the point of it being overly sweet. The Overworld, for example, is quite chill for the most part.

Story-wise, it’s not that great. Maybe you’ll get a chuckle or 2 from the odd bee-related pun, but all-in-all, you can write off the story and just enjoy some platforming.

One of the unique points of this game is the fact the players can attempt to run the Impossible Lair at any time that they wish after being kicked out of the stingdom. This sort of gives the player the power to set the pace of the game off the bat. This is incredibly handy for players who are into flawless death runs. But for the common gamer, there are upwards of a dozen hours of content. This is not accounting for the collection of all T.W.I.T coins and uncovering all the secrets of the Overworld.

Yooka-Laylee is a love letter to the 2.5-D platformers of old. But it is complemented with enough modern innovations that it sets itself apart from similar titles in the same vain. Exploration in and out of the chapters plays a huge role in the enjoyment factor. In this reviewer’s opinion, there is no better feeling than finding a less obvious path away from the critical path and getting rewarded for it. In the case of this game, that comes in the form of the Secret Exits. And finding one is often a cause for celebration.

The many bee-related puns in the game are either going to be funny or annoying, depending on how one looks on it. It certainly adds a bit of charm to the title. But honestly, after seeing it almost every other dialogue sequence, it sort of gets a little cheesy. Aside from that little note, this is one of the best platformers anyone’s going to find right now. It’s simple enough that it won’t frighten off newcomers to the series. At the same time, the depth and complexity of its puzzle-based platforming are going to excite and challenge completionists.

I highly recommend this title for everyone regardless of age and skill level. It is well worth the initial asking price. Sure, the visuals appeal to a younger demographic. But at its core lies some of the tightest platforming that hasn’t been seen since the days of a few console generations ago. That is something the young of heart will really appreciate.