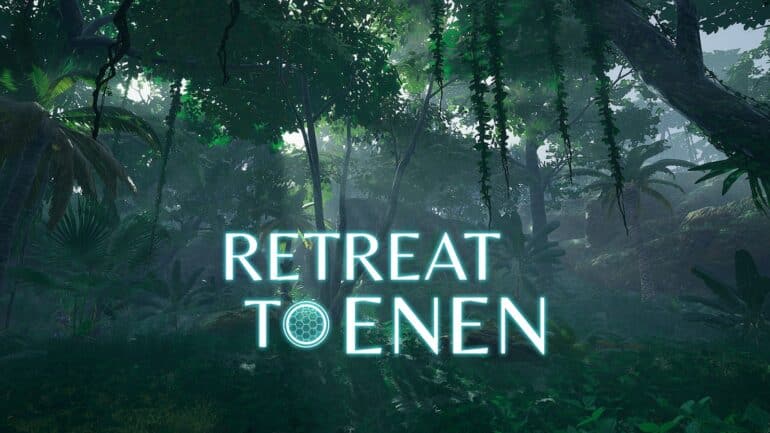 Publisher Freedom Games has announced today that its futuristic, open-world survival game, Retreat to Enen, has been released on PC (via Steam and Epic Games Store). The game allows players to craft, base build, hunt, fish, meditate, and explore to their hearts’ content.

“Simulating nature’s tranquility in a digital space with Retreat to Enen was a very personal and important journey for our team,” said Justin Hosford, Founder, Head West. “It’s hard to look past the world’s hardships at times, so we wanted to share some positive energy in a relaxing space. We hope Retreat to Enen can comfort those in need and maybe even teach you some new meditation techniques.”

About Retreat to Enen

It is the year 3600 CE, humanity is unrecognizable after centuries of war, socio-economic strife, and the impending climate catastrophe. Turning back from the brink, humans chose a different path of healing, peace, and reverence for the ecosystem they are a part of. As the Earth heals, every human who reaches adulthood is now tasked with learning how to become one with Nature, on the island of Enen.

Return to Enen focuses on this rite of passage. Arrive at the legendary island to learn how to live in peaceful harmony with nature by surviving on your own, discovering the island’s secrets, and mastering the art of meditation.

A relaxing and engaging survival game, meditation is essential to progress in Return to Enen. Map out the island, forage for food, hunt game, and collect supplies to build a peaceful home to spend many nights in. Seek out ancient ruins and find meditation points to learn the secrets of humanity in the 37th century.

Roam an island with three vast, distinct biomes – Dive deep and explore breathtaking underwater environments off tropical beaches. Hunt game for food through dense redwood forests and the thick undergrowth. Feel the snow underfoot while seeking ruins in the chilly Arctic. Lay back and stare at the stars, all thanks to a complex weather and day/night simulation system.

The game’s meditation mechanics have been created in collaboration with licensed mental health specialists to impart new knowledge about relaxation to players. Meditation points on the island offer the chance to learn breathing exercises and participate in guided meditations IRL, along with the opportunity to ponder humanity’s complex relationship with the world.

Retreat to Enen is out now on PC (via Steam and Epic Games Store) for $24.99 with English language support. For more information about the game, check out its official website.