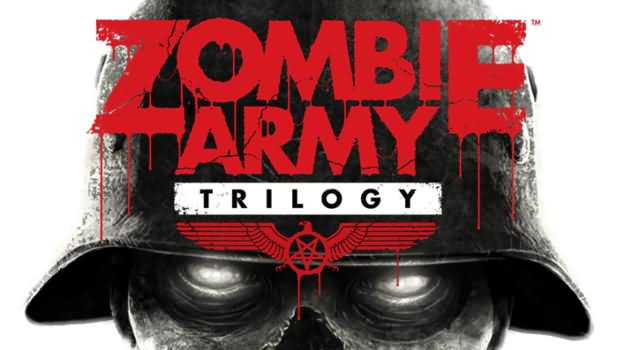 The videogame industry has had it’s share of overdone clichés lately. Zombie games? Done to hell. World War 2 games? Also done to hell. Zombie games set in World War 2? Surprisingly done before. With such a crowded market, does Rebellion‘s third person shooter game Zombie Army Trilogy have what it take to stay fresh?

Being the third game in the series, Zombie Army Trilogy or ZAT for short runs on the same engine as Rebellion’s previous Sniper Elite games. Instead of sniping Nazis though, the game has the player sniping Zombie Nazis. What that means for the player is that there’s less time spent sneaking around attempting to avoid getting pelted in the face with hot German lead and more time running around sending dead krauts back to the other side.  The game carries a very B-film horror movie aesthetic to it. Nothing visually stunning though the combination of abandoned architecture and occult paraphernalia does help sell the tone the game is going for. In terms of unique aesthetics, the game doesn’t really stand out in that aspect. Technically speaking, it’s a pretty alright looking game, it just falls victim to belonging an overpopulated genre.

The games soundtrack help contribute to the same macabre feel the game’s visuals try to give off. The music sounds incredibly sinister from the onset and really helps hammer down the thrill whether you’re mowing down zombies in the droves or wandering through an empty building scrounging for ammo.

Now onto the gameplay itself, despite running on Sniper Elite‘s engine, there’s less sneaking and sniping involved in the game. Most of the time, you’ll find yourself moving from one checkpoint to another and slaughtering every zombie between point A and B. Luckily, to stop this from getting too stale, the game features different locations to mix up the zombie slaughter every now and then. To aid the player in their quest to put the dead to rest, the game lets you carry around one primary gun, a secondary gun, a pistol, and an assortment of equipment like grenades and trip mines.

At the start of every campaign, you’re allowed to pick your selection of guns and ratio out the equipment you bring to war. Besides the guns you start with, there are also other more powerful guns scattered around the map for you to pick up. To round up your arsenal, you also come equipped with the ability to kick down enemies. Kicking helps you push away zombies who come too close for comfort and as an added bonus, kicking down zombies also helps finish them down and saves you some ammo while you’re at it.

To compliment your selection of guns, the game also has a selection of enemies to tackle. There are your garden variety zombies who shamble clumsily and attempt to take you on by swarming you, flaming suicide bombers who rush at you with no abandon in an attempt to blow you up, and even machinegun wielding elites which eat up an impressive amount of lead before kicking it.

While the sniping may have been drastically reduced compared to Sniper Elite, that doesn’t mean it’s completely removed. There are still segments in the game where it’s better to pick off your targets from a safe distance, and as a carryover from Sniper Elite, the game also occasionally displays an X-ray close up view of some of your sniper kills.

In terms of plot, there really isn’t anything original about it. At the brink of losing the war, Hitler unleashes zombies from the gates of hell and literally all hell breaks lose. You’re tasked with killing him and stopping the zombie apocalypse, the plot doesn’t get any deeper than that. This isn’t necessarily a bad thing since the game focuses more on gameplay rather than story. It’s your choice whether to tackle it solo for maximum horror or to fight head on with friends in online multiplayer.

Overall, the game’s a pretty enjoyable zombie-killing slaughter-fest. Honestly not much sets it apart from other zombie third person shooters such as Dead Space and other coop based zombie shooters such as Call of Duty’s Nazi zombies mode or the Left for Dead series. Does that make it a bad game? Not necessarily. While the game does have sniping mechanics such as accurate sway and bullet drop, it’s really hard to appreciate it since you’d be spending more time actively running and gunning zombies than staying still and sniping.

So in the end, is the game worth picking up? If you’re new to the genre or just looking for some mindless zombie killing fun, the game has plenty in store for you. While it doesn’t necessarily stand out from the rest of the games in the genre, it’s still a decent title with solid and enjoyable gameplay. If you liked the game, then you’re in for a treat since Zombie Army Trilogy comes packaged with the previous games of the series and the first game even comes remastered.

Zombie Army Trilogy is a fun and enjoyable game despite belonging in an oversaturated market of Zombie ad WW2 games. If you’re hungry for Nazi zombie hunting then this game just might be for you.