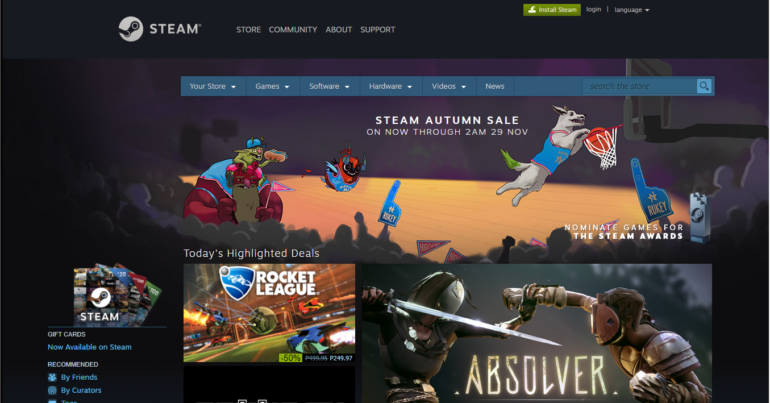 It’s the end of November and it only means one thing for gamers all around the world. It means that the annual Steam Autumn Sale is upon us. Sometimes it’s really hard to choose which games to get when all these discounts are flashing through our screens.

With 70% of Steam’s users giving it a positive review. This game about killing Nazis that overtook America is such a great deal with a 50% discount. With a lot of devastating weapons at your disposal, you don’t need to buy loot boxes to unlock any of these.

South Park: The Fractured But Whole

It’s the sequel to The Stick of Truth and is a breath of fresh air among these games with Microtransactions. Although they released a mobile game with microtransactions which is understandable because it’s free to play, this one is just all about having a good time in a world of make-believe.

Hob is a newly released platformer game from the creators of Torchlight II. With 89% of Steam’s users giving it a positive score, you can never go wrong with a good old platformer game like this one.

Dishonored: Death of the Outsider

It may just be a DLC game but this game is packed with action for hours. You won’t be bogged down by mictrotransactions in this one. If you’ve ever planned to complete your collection of Dishonored games, now is the time to do so. You can also buy the complete collection for a discounted price of Php1474.00 which already includes both main Dishonored games and this one.

This game made a lot of buzz when the developers of the game decided to release it on torrent sites for everyone to download for free. They said they did it because they felt bad people were having to buy the game even though they didn’t have enough funds to do so. Now it’s time for us to give back to these modern day heroes and support them by buying this discounted game now so they can make more awesome games in the future.

A game that supposedly deletes your game file if you die too many times. Considered to be one of the best out there, it is such a steal for its price tag. Plus, you don’t have to buy lootboxes to revive yourself.

This top down warfare shooter is a hidden gem that needs to be discovered. It’s a beautiful open world where your character persists even when you go offline. If you enjoy combat and warfare on a large scale then this is a good time to pick up this game.

One of the best indie games of the year. Pyre is a party based RPG where no two player’s story are alike. So playing the game as many times as you like will give you different results all the time. If you haven’t gotten the chance to pick it up during its release, now would be a great time to do it.

If you’re looking for a cool VR game, then this is one of the best out there on the steam sale. With a time skip mechanic that’s super fun. This is one of those games that you don’t want to miss out on.

The Resident Evil game that went back to its roots. A VR game and an FPS horror game in one. If you have yet to pick up this gem of a horror game, it is currently on sale now on Steam for half the price. This game doesn’t bog you down with loot boxes as most of the powerful weapons in this game are unlockable just by playing through it.

So there you have it. Have you found a game you wanted to buy yet? If not, there are still plenty of games on the Steam sale that you can look into. I’m sure you can find the right one for you. At the end of the day, as long as you’re having fun and enjoying the game, no matter what the price tag, it will still be worth it. Let us know in the comments what you got!