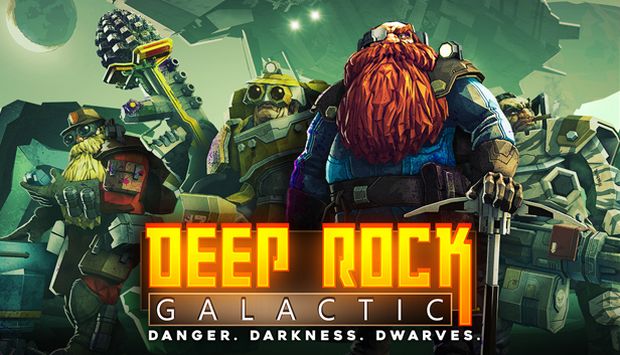 Deep Rock Galactic has an interesting take as it has some farming and mining going on. The game starts with the ships door opening up for you to explore around.

As you delve deeper into the game, the game then starts teaching how to use certain items and the sort. As of now, it appears very open world-like. Being a miner, your job is to extract morkite from the mines within. However be warned, there are enemies. In order to see where you’re going, players can throw flares to light up the area.

However, it’s kind of hard to tell what else they probably have in store as it takes quite a while to farm. You’ll be digging up 100 pieces of morkite. In the game, you also have tools to find out what the Morkite is and where it is instead of just mindlessly loitering around in the dark.

One of the unique things behind Deep Rock Galactic is your ability to manipulate the environment around you. Unlike other games, there are some areas that you can’t mess around in. Here in Deep Rock Galactic, the entire cavern is mine-able. You can use your pick-axe and mine away the rock on the wall and build a strange path to God knows where.

Unfortunately, the preview only allows you to use one of the classes which is the Gunner. Gunner’s have heavy machine guns which they can also use to chip away the rock. But take note, the gun doesn’t chip away the rock as fast as the pick does. However, it’s not really the Gunner’s job to pick away at the rock. There are other job classes that Deep Rock Galactic is supposed to feature but isn’t there yet. Then again, this is only the alpha version so Ghost Ship games will be adding some of the other features soon.

All in all, the game is quite amazing for an indie game. The graphics are quite well done and it’s a game that allows multiple possibilities especially with multiplayer in it. Having a dynamic environment makes the game more interesting especially since it’s not common in most games where you can actually destroy it. Definitely, a game to look forward to especially as a party game with friends.