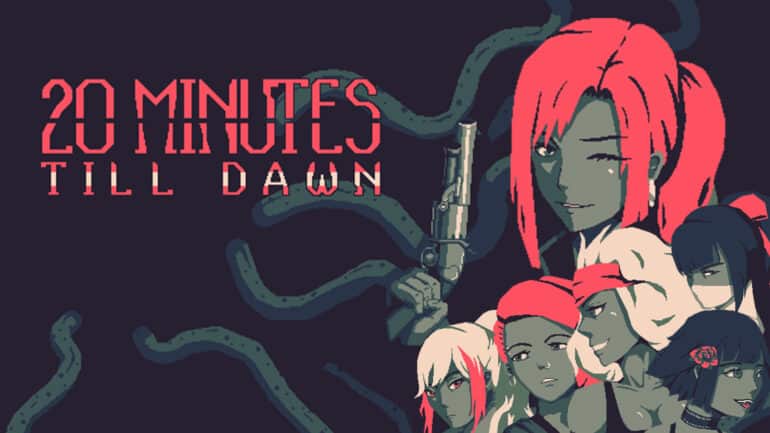 20 Minutes Till Dawn developed by Flanne is very simple on the Surface. It is a horde survival bullet-hell shooter which deploys hordes of enemies for the player to fight and all one has to do is survive for 20 minutes. But under that simplicity, there is quite a depth to the game with how it rolls out its upgrades along with the various playable characters which provide fun and quite a few different ways to kill hordes of monsters in the game.

With seven playable characters and weapons to choose from, there are a ton of different ways one can disperse the hordes of monsters in the game. 20 minutes till Dawn relies on the player wanting to clean the screen of all these ever-growing hordes of Monsters over and over again. And it managed to successfully make me do that with its fun and combat and the satisfying way the player becomes more powerful as the 20 minutes goes on making once hard monsters easy while proceeding and moving along. Collecting drops monsters leave behind ranks the player up and allows them to choose a randomly generated one.

Each of these playstyles made a lot of difference in how I played the games while managing to be fun. For example, a run with an Ice based build helped me to put the hordes in place as I disperse them while lighting, and fire is all about sustained damages and explosions. There are also various powerups called summons which is like pets that attack their own. It was exciting to discover how each of these powerups reacted with each other, it was so exciting to discover that having fire and lighting upgrades made the enemies explode.

There are specific very powerful upgrades that unlock later in the 20 minutes as these upgrades synergize with each other. This is further enhanced by each of the playable characters who each have their own special ability. For example, Spark has a 50% chance to call lighting on every impact and she is the best with lighting and fire-based playthroughs. If one is trying out to play with the summons Lilith and the Batgun synergy each helping out the damage and variability them.

These are just two examples of many other combinations which are possible to try. But this does come with a few upgrades which are kind of pointless with one just increasing the range one can pick up the pellets and along with a glare which is inconsequential by the end of the night. These upgrades also affect the RNG of getting the more useful upgrades.

Alongside the upgrades, the game also has a few permanent stat boosts in the name of Runes which can be unlocked as one plays more of the game. These help with the higher difficulties of the game. Speaking of which the game has 15 “Darkness” levels which act as difficulty levels to the danger with each of the Darkness levels adding on modifies to spice the playing experience by beefing up enemies, making the boss creatures attack more, etc. These difficulty modes are fun to unlock but a lot of them are pretty redundant and do not really improve how the game is played.

The enemy variety is adequate and the same goes for the combinations of monsters thrown at the player. This keeps the game somewhat interesting but the tedium of killing the same enemy does take its toll.

There are two bosses in the game and both are fun to fight and have good mechanics. The mini-bosses, on the other hand, are just chunky beefed-up enemies with a ton of health. They do not serve a huge challenge and just end up being bullet sponges.

The game has visibility issues when it gets crazy as seen in the picture above I can not even see my character under her own bullets. This is an issue as this may lead to the player bumping into enemies and losing health. It is important that players see their controlled avatar at all times, or else they can get lost in the shuffle. Also, the lack of music is noticeable and personally, it would enhance the experience if it had music running in the background.