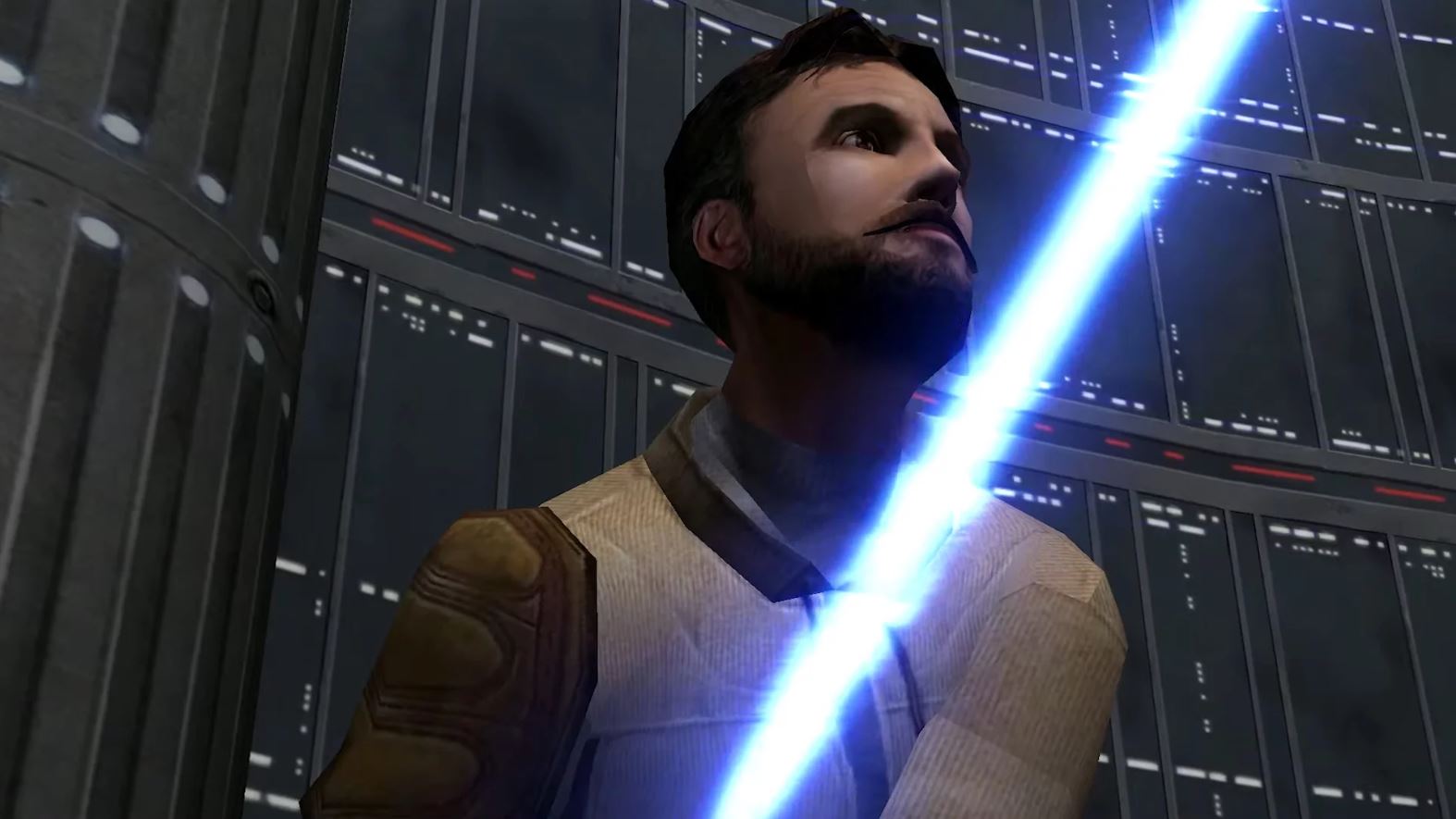 It’s been more than a decade since Star Wars Jedi Knight II: Jedi Outcast launched on PC, GameCube, and the original Xbox. The game didn’t make its way to the PS2 (a total bummer, really) and finally, after 17 years, Jedi Outcast is now available on the Sony platform (I hope this goes the same for Rogue Squadron… but that Nintendo exclusivity though?). A true gem, an amazing classic title to go back to, Jedi Outcast is unbelievably the greatest lightsaber-wielding shooter Star Wars game in history.

But how does it fare in this generation? Ports have never been successful and only a handful of them received positive feedback. I’m glad to tell you that Jedi Outcast is remarkably one of the best ports to come out on PS4 this year.

The plot focuses on Kyle Katarn, a mercenary for the New Republic and former Jedi who almost surrendered to the Dark Side, and how he found his way back as a Jedi. Jedi Outcast is the third entry in the Jedi Knight series. For those who never heard of Star Wars Jedi Knight, the first-ever entry was Dark Forces on the PS1 in 1996.

17 years – remember this as you read along. The gameplay didn’t change much aside from the control improvements Vicarious Visions has done for the game. It’s still a third-person action-adventure experience where you can swap from third-person to first-person depending on your preference. You get to shoot Stormtroopers with an E11 Blaster and wield a lightsaber plus use the Force to overcome obstacles. There are a couple of weapons you can use which include a Bowcaster and the Imperial Heavy Repeater. However, you have to be aware that there are certain weapons that use the same ammo as the E11 and the Bryar Pistol.

At one point in the game, I waltz into a group of Stormtroopers and Imperial Officers. I started shooting at them like there’s no tomorrow without thinking that I’m literally wasting ammo. Situations like this are annoying, the game doesn’t guide or tell you which ammo pack is for what weapon. You have to literally go through your arsenal of weapons to know which blaster got refilled. But that doesn’t mean it is “bad”, it’s annoyingly amusing.

When we talk about the game’s controls, Jedi Outcast does show signs that it has aged over the course of 17 years when it comes to gameplay mechanics. Playing the game on the PS4 is surprisingly good. It never felt so smooth playing the game with a controller. Controls weren’t cumbersome and it didn’t feel sluggish. You can swiftly pan left and right and aim at enemies without difficulty. However, the shooting mechanics tend to be really unforgiving in higher difficulties, even lower ones. You’ll feel like a Stormtrooper who misses his shots all the time – and I’m not saying that it only happens with an E11 Blaster, but all weapons. You need to be precise since the hitbox of the NPCs is extremely small. We can put all the blame on the dated programming. It’s frustrating, yes, but it’s also entertaining and I found myself having fun.

Unlike newer games in this generation where there are a handful of tips and objective markers in the map, Jedi Outcast pushes its players to explore tidbits of each level. While the game feels like it’s linear, there are no guides or markers as to where you have to go next. This is where the game encourages the player to take a little adventure by venturing into secret pathways, tunnels, and rooms. However, it tends to be “unfair” in such cases where you feel lost. There were times where I had to go back and forth for hours just to find a tunnel that leads into a control room where I have to destroy a generator.

Since Jedi Outcast is a re-release and not a remaster, there are only minimal improvements. The game looks 100% similar to the PC version now with a native 1080p resolution support. Visually, it looks sharper than its older console counterparts and the overall performance is on par with the PC port with a consistent 60 frames-per-second.

What’s disappointing with this particular port is the absence of the fantastic multiplayer mode that the game had. There was no particular reason as to why it wasn’t included, but Aspyr might be adding this support in the future or in Jedi Academy once it releases early next year on the PS4.

Star Wars Jedi Knight II: Jedi Outcast is a trip down the memory lane. It’s the greatest Star Wars game of all time next to Star Wars Battlefront II (the 2005 version, not 2017). With an amazing story, memorable combat experiences, and the fantastic lightsaber action, Jedi Outcast’s flaws become insignificant next to the power of the Force.