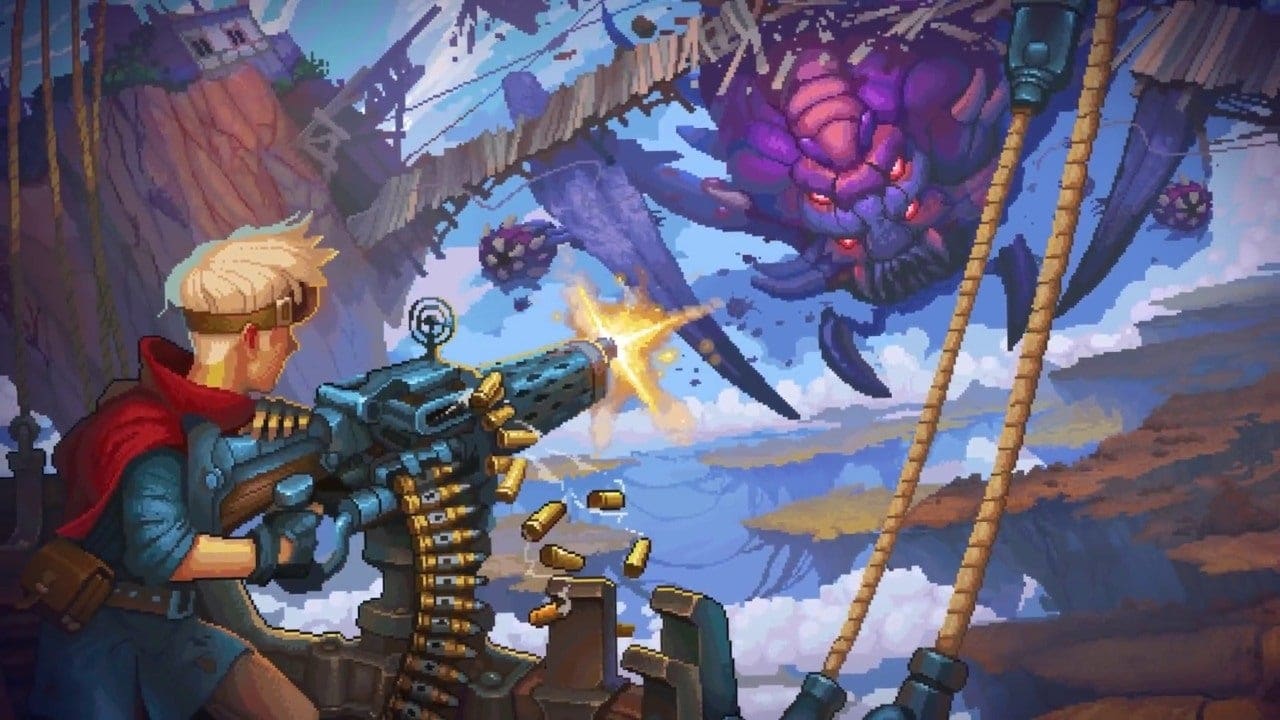 It's the start of a new dawn among the clouds

The people of Aspya once lived in peace. Many years after the Earth turned into thousands of floating islands in the air, humanity found a way to survive and even thrive. Building skyships and planting crops have become a way of life, particularly for the factions of Scientists, Engineers, and Earners. But one day, vicious raiders from the Desert Lands destroyed that peace. Welcome to the world of Black Skylands.

Black Skylands is part open world exploration game, part twin stick shooter, and part farming simulator. From my experiences from the playing the demo on Steam, I found myself switching between resource gathering, farming, and combat at a moments notice. And yet, none of it felt out of place. And I’ve only described about “land” based activities. I have yet to touch upon skyship exploration and combat. Which in itself should be self explanatory, but in combination with all that’s happening off the ship, really sells the world of Black Skylands.

Players take control of Eva – a proud daughters of the Earners. After botched negotiations and the near eradication of her people at the hands of Kain’s Falcons, Eva swore revenge. But to do so, she must rebuild her aerial home “from the deck up”, and build up an arsenal that will stand up to the marauding bandits.

The combat in Black Skylands is similar to must top down shooters, in that players aim and shoot and cycle through weapons using the mouse. The spacebar is used to dodge bullets and to leap through gaps. Interestingly enough, there is a grappling hook that can be used to hook distant plots of floating land… and enemies. I do see the appeal of using a grappling hook, especially when it concerns things floating in the air. It’s a fun little traversal mechanic, and I am looking forward to how the game will fully utilize this bit of kit.

Combat was enjoyable for the most part. Getting kills with the grappling hook was satisfying. And the using melee attacks as a means of getting ammo back never gets old. But there are a couple of aspects of combat that I didn’t like all that much.

For starters, you have to be somewhat precise with your shooting. For some reason, the guns only come with, at maximum, 3 full magazines. That’s a problem because top down shooters typically require players to hold off waves of enemies. And this game has such a mission in the demo. It was fun mission, that I have no doubt. But I found myself more annoyed than feeling any sort of tension from dying. Secondly, I had to stay relatively close to enemies to be effective. Range does seem to be issue with this version of the demo. I can’t seem to find a good balance between keeping distance and unleashing hell. I would find myself getting too close, and relying way too much on the dodge. Or I would be wasting bullets shooting at something that’s not even within range. Factor in the slow reloading of the guns, and it might seem like a problem. Or is it?

Oddly enough, all the problems I’ve suggested here can be solved by changing some base numbers. And how you do that in a gameplay sense? Through mods, of course.

Black Skylands supports a wide array of upgrades out of the gate. The automatic rifle I picked up early on in my adventure is made all the better with mods. And it ties in with the theme of exploration. You see, apart from buying mods, the player can explore the world and look for mod chests. Opening one up is like opening a loot box, for a weapon that you own. And let me tell you right now – there is a level of excitement I feel every time I spot one in the distance. I just have to get it. And the thought of leaving one behind is rather depressing. That alone is reason enough make me what to explore. Well, apart from resource gathering.

Rebuilding the Fathership is one of the game’s main objectives. To do this, the player must clear the debris on the farming lands, and fix any damages left by the bandit attack. You’re going to need resources like earth metals and wood to properly repair your base – as well as expanding past farming. Exploring the map for the needed resources becomes a must at this point. Thankfully, the ship’s hold can accommodate for quite a bit of resources. But you’ll find yourself going back and forth to unload your spoils back at home, nonetheless.

The farming is very much simplified from my experience. The game is not going to ask you to hoe individual plots of lands. It sets just the right amount of land for planting. Honestly, that makes the job so much easier. Choosing between tending the land and exploring the world is something I wasn’t keen on doing. Whatever the farming aspect ultimately becomes in the full release, it’s going to be a lot less stressful than actual combat.

I initially had an issue with the ship to ship combat aspect of the game. I didn’t have much of an issue when came to steering the ship itself. It was rather intuitive, really. The issue I had was with aiming the cannon at smaller targets. There is an enemy flyer type that insist I give it attention. They don’t do much damage to my airship, but their constant buzzing around was very annoying. I would occasionally overheat my cannons fighting at range, and though they can be killed in one short range volley, turning the ship in the proper direction took seconds off the clock. That’s time that I using for exploration and reclaiming land from Kain’s Falcons, btw.

I didn’t see a solution for this until the very end of the demo when it was revealed that I can customize my airship and even change the model out entirely. The thought of having something small and maneuverable doing my scouting missions crossed my mind. Too bad, the next time I’ll be seeing those options again was in the full game.

Black Skylands: Origins nails everything right when it comes to giving us a preview of what the game will look like on launch. The combat has potential, and the farming aspect isn’t too overwhelming. The ship building aspect too allows players to customize their ships, affording them some relief from those pesky mosquitos. In short, there is a lot to look forward to with this title. Apart from the revenge story, and uncovering the mysteries of the skies.

All-in-all, I can’t wait to see what becomes of the game post launch. Especially when the devs are so open to player feedback.