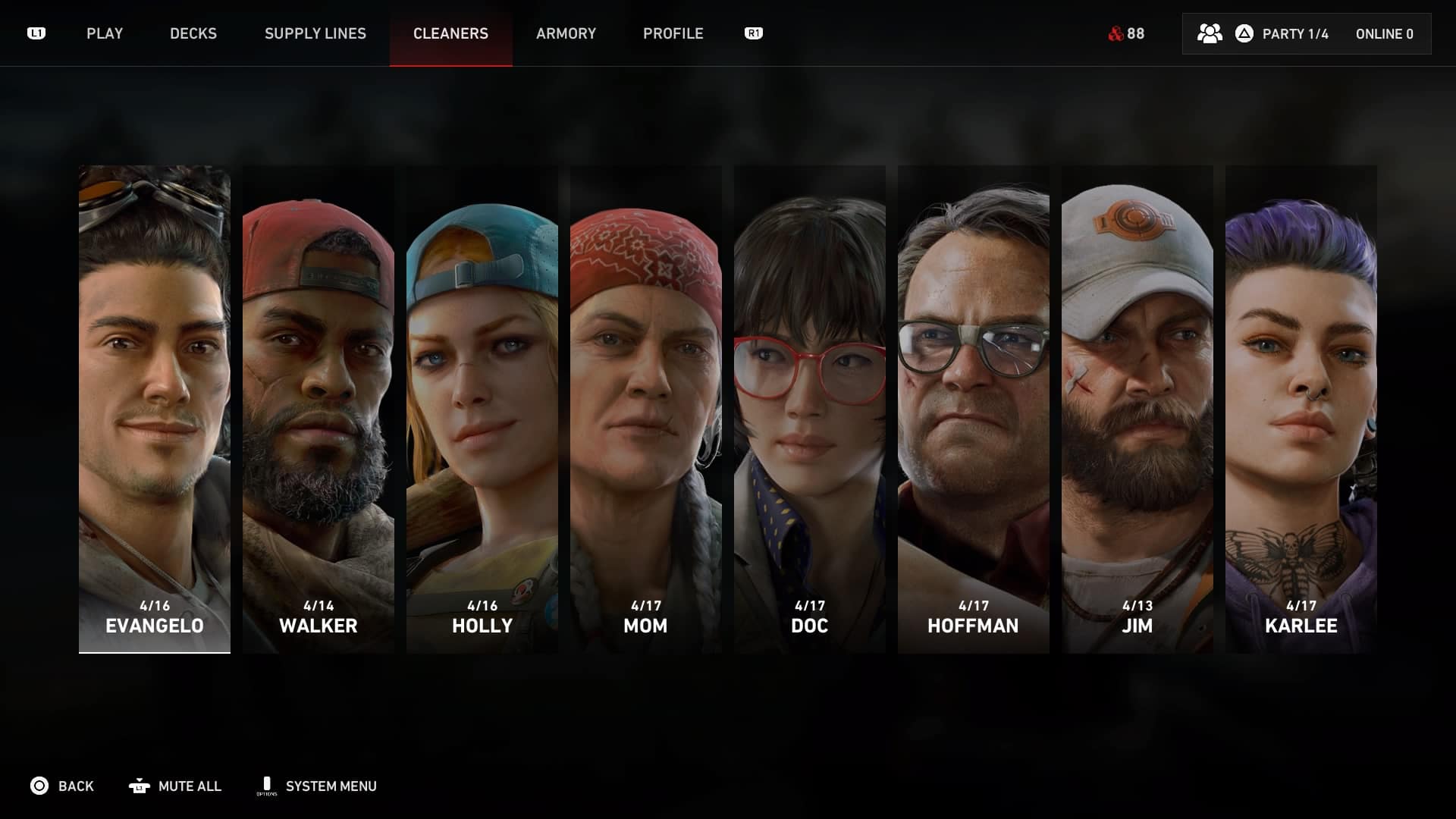 Learn more about the playable characters of the game and what they can do.

In Back 4 Blood, you have four default characters to choose from and each of them has its own pros and cons. You can also unlock the other four characters as well and they also have their own advantages that set them apart from the rest.

Here are the Back 4 Blood all characters, their perks they come with, and the best weapons they can use.

Walker is one of the first four available characters for players to choose in Back 4 Blood. He is the combat specialist and the leader in the group with only one goal in his mind: erasing all of the Ridden from Earth. Walker is a tanky beast and can take a lot of hits and would be the best character to choose for those who love close-up action.

His perks make it very desirable for beginners since his solo ability increases his damage and can increase accuracy if done right. His team perk is also favorable since it can increase the slots on the health bar, making them survive longer in combat.

It is highly recommended that you should bring an Assault Rifle if you’re using Walker like an M4 Carbine and a good sidearm that can handle close-quarters shooting like The Belgian. You can also opt for a Light Machinegun to unload a lot of bullets on Riddens. For throwables, a Frag Grenade would be nice for direct and focused damage.

Mom actually does what mothers do: take care of her teammates. Having an extra life is a good Team Perk but it’s her solo perks where she shines most. Her primary role in the team is acting support which makes her essential and helpful in runs.

The Instant Revives perk really saves the day if you want your team to survive a very long Act in high difficulty. Health recovery items will be scarce, which is the reason why Mom will be an essential member of the team since she can revive teammates instantly without any help. No need to bring a Trauma kit to revive members who got downed. Also, her +1 Support inventory is helpful for bringing more health recovery items to heal heavily damaged team members when needed.

Mom comes with The Belgian sidearm from the start so getting a rarer version of it would be nice. As for the primary weapon, a versatile Submachine Gun would be the best weapon to use so you can easily move around and assist your downed teammates right away. For throwables, either a Molotov or a Flashbang would be good to disperse a crowd of Riddens and clear a road for downed teammates.

Holly is the cheerleader and one of the comedic reliefs in the group. Aside from that, she loves being in front of danger and brings a bat as a default sidearm in B4B. She is mostly about hit and run with better defense compared to younger Evangelo in default. She also makes the team have higher stamina making everyone run longer.

A hatchet would be the better melee weapon of choice for this spunky young woman for lower stamina depletion and higher damage. Use a shotgun that can quickly reload for easy crowd control and no need to aim. For throwables, a grenade would be better to disperse the Ridden crowd quickly and let the limbs go flying.

The worst character to play in Back 4 Blood, but has his uses in the team. He is more of a distance type character and can go around fights quickly compared to the rest of the default team. He has a solo perk that allows him to easily break out from Ridden grabs, which makes him the escape artist. He also quickly gains back stamina, which is why he is quite fast.

A Submachine Gun for his primary would be the best for his ability to move around quickly. For his sidearm, anything that can pepper a lot of bullets and is accurate from the hip. Melee weapons would not be recommended though. For throwables, a Flashbang is suggested to easily blind enemies to make him escape undetected or a pipe bomb to lure away all of the Ridden hordes into one place.

Doc is one of the unlockable characters in B4B and essential to the team. She is the ultimate support character to use who can keep her allies alive without the use of healing items. If she does have healing items, you can quickly heal your teammates and even add more healing power to it.

Getting knocked down a lot in B4B would traumatize your characters which affects the characters’ health bar limit. Each KO decreases the life bars, but having the Doc will prevent that. She is essential for those trying to complete all runs in one go.

Doc is recommended to have a Submachine Gun for versatility and a handy handgun for a sidearm. The goal is not to become the offensive power of the team, but the supporter who can easily come to the rescue whenever a teammate is down. For throwables, anything will do as long as they can clear the way to the patient.

The best tank for the team and the replacement for Walker when he gets unlocked. He can take a lot of damage and still stand with his best guns in his hands and take along more Riddens as much as possible. He can mow down a lot of them and have spare ammo too. His Solo Perk allows him to spawn ammo if he kills a Ridden and also adds one extra offensive slot for him.

A very important Team Perk is also exclusive to him, which increases the team’s ammo capacity. With more ammo, the longer the team can survive.

Hoffman is best with a Light Machinegun as he can dish out a lot of bullets and still have ammo to spare and can even spawn more ammo with every kill he gets. Even though it has a strong recoil, the Light Machinegun can hit a lot of Riddens. Any sidearm will do, but a handgun could be handy for focused hits. For throwables, he would love to use anything that can blow up the Ridden, but it would be best to use a Molotov.

Jim is the one to use for players who love to wait at a distance and snipe at enemies. He is the damage dealer and a one-shot nightmare for Riddens. His solo perks allow him to increase his damage for every kill he does and his aim-down speed is better compared to other characters, perfect for a sniper.

The team weakspot damage Team Perk is also beneficial especially when fighting mutated Ridden and big bosses. When you hit the weakspots, you can give them tremendous damage, killing them easily. Unfortunately, he needs to hang back, or else he can easily get overwhelmed with hordes.

Any sniper rifle is the best recommended primary weapon to use for Jim. His secondary weapon should be a TEC 9 or The Belgian in order to blast away Ridden that might crowd him when he gets cornered. For throwables, a Flashbang would be best to blind the enemy and make him slip away easily.

The best character to use in B4B if you want to slip in and out in combat, damage enemies efficiently, be essential in exploring, and more. Karlee can sense hazards ahead of her, which makes it easier for everyone to not get busted with traps. She also has a +1 quick inventory that makes her bring 2 Toolkits, Trauma Kits to the fight.

Karlee’s Team Perk is the most important use for her since she can increase the use speed of items and weapons. This makes all characters quickly swap their primary and secondary weapons and use items, making them more efficient in cooperative combat and deadlier.

Best to change her default AK47 Assault Rifle right away with an M4 Carbine since the prior has a strong recoil and low accuracy. The TEC 9 is already the perfect sidearm for her to use, just upgrade it to a higher rarity if you get the chance. For throwables, a Molotov would be a good choice for an easy hit-and-run drop on a crowd of Riddens.

How to Unlock Doc, Hoffman, Jim, and Karlee

There are four more characters to unlock in Back 4 Blood, which will make the total playable characters eight. These other four are locked for some reason, but it is easy to make them playable though without even paying for it. In order to unlock them, you only need to complete The Devil’s Return arc and surviving The Crossing chapter. After completing the cinematic, you will be able to see the other four characters finally selectable on the Cleaners screen.

Note: You cannot unlock the other four characters on Solo Campaign. You need to play online multiplayer in order to gain achievements, which in return, will offer rewards. Completing The Devil’s Return will unlock Doc, Hoffman, Jim, and Karlee.

The default team has no choice but to use all first four characters, so let’s give you the best team composition with all eight characters available instead. Here are some combinations to choose from:

If you want to survive all four Acts in B4B, then it’s good to have:

Doc and Mom would be the support characters that are needed to extend the life of the whole team in this grueling adventure while Walker increases the team’s health and can tank a lot of damage, while Karlee can keep the rest alive by preventing them from getting damaged by traps or other hazards. She can also bring two Toolkits in order to unlock all locked rooms with a lot of goodies inside.

For those who just want to run one Act at a time, then your team composition should be:

Doc is there to take care of heavily damaged teammates, Jim for efficient and precise damage on bosses and mutated Riddens, and Hoffman to spawn tons and tons of ammo. Anyone else can just help out with their team perks.

You also need to learn all of the weapons and their details in Back 4 Blood so that you can deal with whatever pros and cons for each. Either it would be the best weapon to use or compensate in the meantime while there is no other alternative.