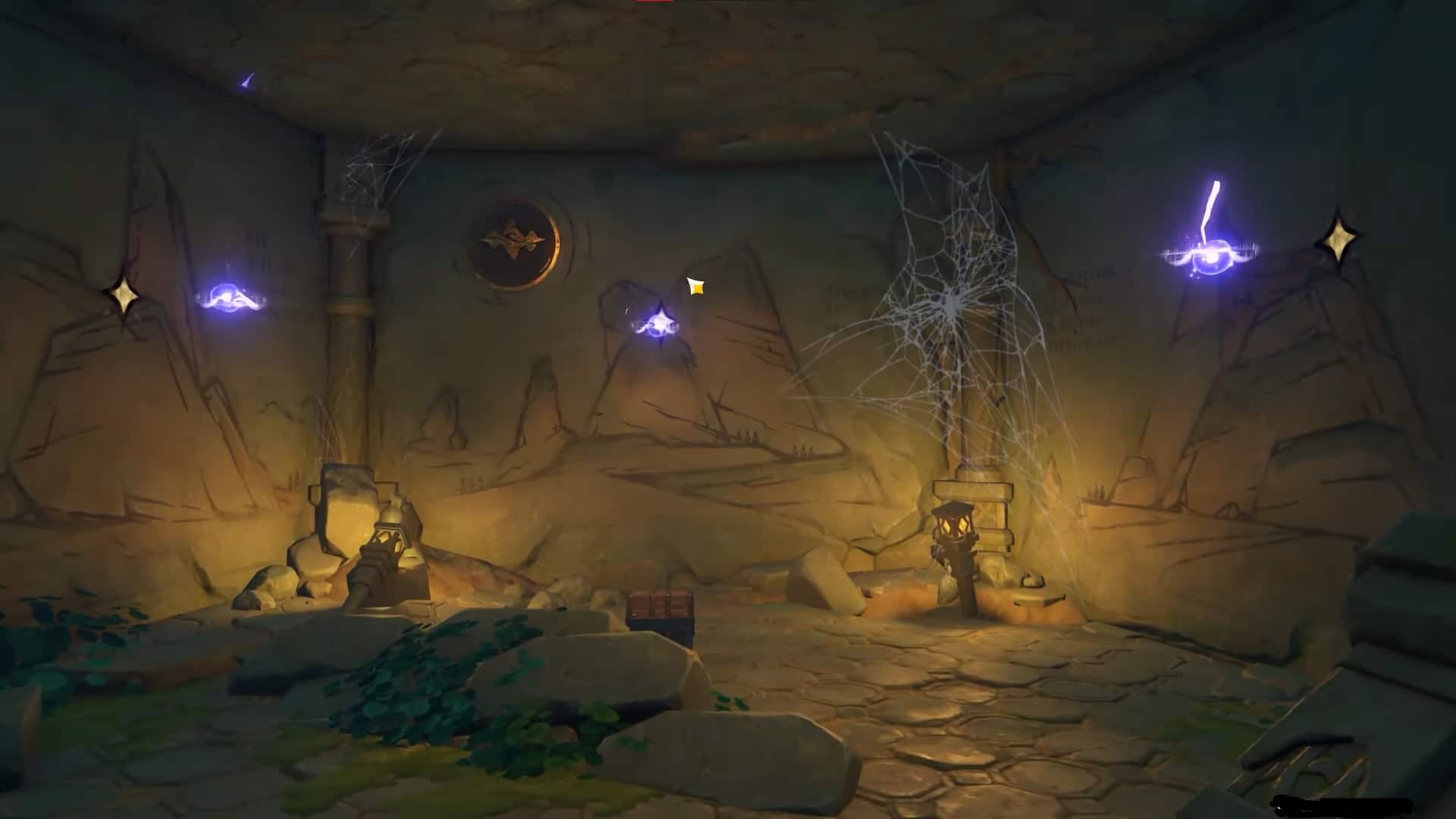 Here's how you can find all of the three Star Shaped Gems inside the Shirikoro Peak ruins.

In Genshin Impact Shirikoro Peak, there is one puzzle that needs three orbs to unlock. This is situated in a big mural that covers all of the walls in a certain room. Here is how you can find the Genshin Impact Star Shaped Gem locations and what to do with them.

All of the secret rooms that have walls with the Thunderbird Wall carving can be found inside the first ruin area of Shirikoro Peak. You just need to bring the Peculiar Pinion gadget in order to open it. The first Thunderbird Wall can be found nearby the entrance where you will encounter a couple of Ruin Cruisers in the first Relay Stone Puzzle and nearby the circular door.

When you enter the first Relay Stone Puzzle room, look at the right wall and look for the Thunderbird Wall. Use the Peculiar Pinion to magically remove it, open the treasure chest inside to find the first Star Shaped Gem along with other goodies.

The location of the second Star Shaped Gem is actually nearby the first one. After collecting the first gem, exit the room where the chest was and look to the wall opposite of the circular door. There should be another Thunderbird Wall. Use the Peculiar Pinion gadget and make it magically vanish.

You will be greeted by yet another Ruin Sentinel type Defender, but it is still in sleep mode. It will only awaken when you approach the chest. You have no choice but to open the chest and defeat the Ruin Defender after collecting the second Star-Shaped Gem inside.

The third Star Shaped Gem is still in the same room, but it will be located a bit further than the first two. From the second Star Shaped Gem location, go left and then another left until you see a flight of stairs going down. At the end of it should be another Thunderbird Wall. Again, remove it magically with the Peculiar Pinion gadget.

When the wall gets removed, get inside and turn right to follow a path. When you encounter some new devices in front of you, look back and you will see Pyro torches stuck on the wall. Change into a Pyro character that can fire flame projectiles, most likely, Amber. Take aim and fire at the first and second lower left torches and the first and second lower right torches. If successful, all torches will light and an Exquisite Chest should spawn.

Proceed further to the room and on the right side corner nearby the entrance, you should see a ceiling that got broken down by a huge tree root. Climb up there and you will see a chest. Collect the third Star Shaped Gem inside.

Now exit from that room and go back to the circular door.

How do you use the Star Shaped Gems?

After collecting all three gems, you can now use them to unlock the mural. You should now head inside the next area after the circular door. This is the second Relay Stone Puzzle room, which is quite expansive.

Take the right path until you encounter a small flight of stairs leading to an enclosed room with a mural. The entrance should have two stone lamps guarding the entrance.

Go upstairs and approach all three sides of the room one at a time. Use the Star Shaped Gem and insert them on each wall with the slot.

If successful, it would lead to a cutscene where three Electric Seelies will appear and run away outside. You will have to find all of them scattered across Tsurumi Island to get your rewards later on.

You might want to check out how you can solve the rest of the puzzles at Shirikoro Peak as well since there are three more to check out. And if you’re looking for New World guides, one of the things players also ask is how to get past the Faction Reputation cap.