All Fortnite Tank Locations – How to Use & Destroy Them 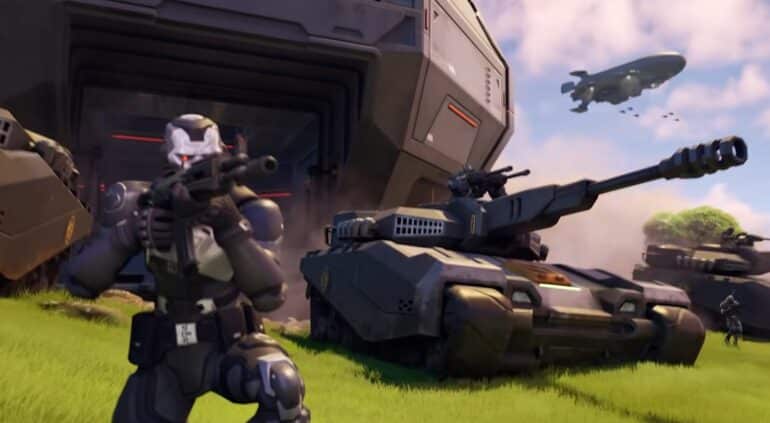 The Fortnite tank is another new addition to Fortnite as part of the continuing war; this powerful and durable vehicle is ideal for leisurely crossing the island and dealing huge damage to your enemies.

Prior to the Fortnite Chapter 3 Season 2 update is the full-scale invasion of the Imagined Order. In addition to siege artillery and airships, they’re bringing an armory of new technology to the battle royale game. There are now red and blue lines around various parts of the island, as well as a drivable Armored Battle Bus.

You’ll need to know exactly where to go on the map if you want to test out the tank, which is contentious due of its perceived overpowering nature. The spawn locations, how to drive, and how to destroy Tanks in Fortnite are all covered in this guide.

What are Tanks in Fortnite?

The Fortnite Tank is the most recent vehicle to join the game’s ever-expanding fleet of vehicles. The Fortnite Tank is a ton of fun, and it packs a hefty punch in terms of weaponry. With the launch of Chapter 3: Season 2 of the popular battle royale, army tanks were included as a brand new vehicle.

In Fortnite, tanks serve as both a means of transportation and a weapon of war. Players can now crush towns and destroy bases with the new wheels, regardless of whether they’re playing competitively or casually.

As the tank is being driven, the driver has control over the tank’s main cannon by pointing their camera at it. It is a strong weapon, albeit slow-moving, that can flip automobiles and inflict more than 100 points of damage on an attacker. Instead of needing to boost to get past walls, you can now simply drive through them.

If you’re playing solo, you can also employ the tank’s turret cannon by shifting seats. A total of four players can ride a tank, and that includes enemy players who discreetly mounts your tank.

This season, the Imagined Order will take control of new regions where tanks spawn in Fortnite. Tank spawn locations may be found here:

The locations of tanks will shift as the Imagined Order takes over new territory in Chapter 3 Season 2. You’ll be able to find them if you follow the red lines.

On this Fortnite map, you can also view where the current tanks are located:

How to Drive the Tank in Fortnite

Since tanks behave similarly to other vehicles in Fortnite, anyone who has driven a car before will feel right at home driving this massive piece of steel. As with the Whiplash race vehicle (which uses a lot of fuel), it has a boost. The tank’s HUD shows you how quickly you’re going and how much fuel is remaining in the tank in two bars to the right.

You may see a picture of the tank at the bottom right of the screen. Real-time updates indicate your turret’s position and how it relates to the rest of the vehicle. Your tank’s damage may be clearly seen in this shot. It’s crucial to keep track of this because if an attacker damages your hatch, you’re open to enemy fire.

Angle your turret with aid from the two bars on the left-hand side of the HUD. It is horizontal if the ‘angle’ bar is at zero degrees. However, it takes some time to get the turret in the right position while aiming. On the left, you can see how far your shot will travel when you release it. Aside from the fact that it prevents you from mistakenly firing into the ground in front of you, this bar is useful for a variety of reasons. The white circle should point in the approximate direction of your enemies, even if it is difficult to aim when going up or down slopes.

Thermal targeting sensors can be used to help you locate your enemies who may be lying behind cover. An enemy or hostile target appears in white on the camera’s thermal scope.

How many Players can Ride a Fortnite Tank?

Fortnite tanks have 4 seats, with the driver in the driver’s seat being able to move the vehicle and fire exploding weapons. There is also a Machine Gunner’s Seat, as well as two roof Passenger seats for those who wish to fire their own guns. You can see your fuel level and speed on the right side of the screen.

How to Destroy Tanks in Fortnite

Targeting the bronze panel beneath the front turrets is the best way to take down a tank in Fortnite rapidly, as it will eventually expose the driver and allow you to finish them off. In spite of the tanks’ tough exterior, there is a weak area that can be destroyed in order to exposed the driver.

When the tank’s engine becomes too hot or its tracks get damaged, you can disable it by shooting at its two back panels. Throwing one of your remote bombs onto the tank and detonating it will cause significant damage.

Getting in the tank with the enemy to prevent them from using it against you is another basic strategy to employ in battle.

How to Repair Tanks in Fortnite

Additionally, Fortnite included a new “repair” feature to its new season, along with the tanks. The map has been littered with repair torches. These items can be picked up and stored in the inventory of the player.

There isn’t much to it: just point the repair torch at the damaged tank and fire. This restores the vehicle’s health. Cars and trucks can also be repaired in this method. Fortnite’s competitiveness can be given a boost by allowing players to repair broken vehicles and then re-use them.

As far as tank information goes, that’s it. Tanks are going to be a big hit with most people while building is disabled!

Here’s an awesome video by Jig5aw on How to Destroy the Fortnite Tank Fast: