A complete guide on the Battle Bus location in Fortnite Chapter 3 Season 2. 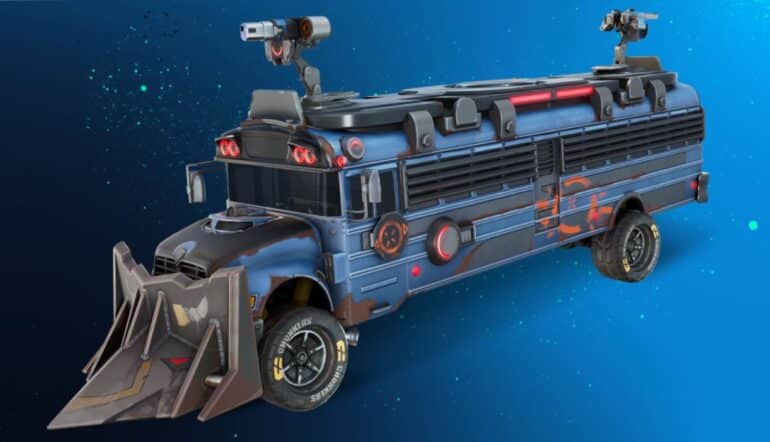 A new feature in the Fortnite Battle Bus equips it with two turrets that can be used to inflict damage, in addition to its heavy armor and large tires, it also now sports a cow catcher on the front.

Ride and drive the Fortnite Battle Bus, and may you and your teammates knock down every obstacle that tries to slow you down along the way. Although this new vehicle is incredibly limited, you should locate it as soon as possible if you want to get your hands on it. This guide will show you where to find Battle Bus in Fortnite.

Where to find Battle Bus in Fortnite Chapter 3 Season 2?

The Fortnite Battle Bus location is at Sanctuary’s southwest corner, it’s parked close to a large building, as marked on the map below. There’s a dirt path connecting Sanctuary to the little islands where you can find the Battle Bus.

Only one Fortnite Battle Bus location is currently visible on the map. If you’re going to use the bus, it’s probably best to bring along a group of friends. Since there are two independent cockpits for the machine gun and rocket turret, it can accommodate up to seven players.

All For Epic Games, the drivable combat bus is exactly what we’ve been looking for, as it’s not just a plain old battle bus.

How to drive the Battle Bus – Fortnite

To be able to drive Fortnite’s Battle Bus you must first unlock it through any Funding Station that can be found on the map. Fortnite’s Battle Bus can only be accessed if you have donated enough Gold Bars at any of the funding stations, and if you have received sufficient donations from the community. This vehicle in the game can be unlocked by you and other players for a small fee of 50 Gold Bars each.

When a given funding station has reached 100%, the Armored Battle Bus will become available to players who are located in the vicinity. And the necessary payment are Gold Bars, which you can obtain from any dead enemy players, POIs, or loot boxes in order to complete the mission.

You can then go look after an Armored Battle Bus, hop in and take control of it.

Various points of interest on the map have funding stations. But only a few of Fortnite’s funding stations work towards unlocking the Armored Battle Bus, which is one of the game’s most sought-after vehicles.

These are the 2 locations of funding stations, as seen on the maps below:

You can fund the Armored Battle Bus in Synapse Station which is located towards the south end of the island at the bottom of the map, west of Chonker’s Speedway.

Sanctuary’s Funding Station is located in the middle of the Eastern portion of the map. Drop by and deposit your Gold Bars.

How to fund the Battle Bus Fortnite Chapter 3 Season 2

This season’s Armored battle bus can only be driven if enough Gold Bars are collected, a feature that was introduced a few seasons ago.

How many players can ride the Fortnite Battle Bus?

It takes seven players to operate the Fortnite Battle Bus, including the driver, two gunners, and four riders. That’s more than enough to get up to some pretty intense hijinks during a match.

Chapter 3 Season 2’s ongoing story is pushed forward by the new resistance quests. The blueprint for a new armored Fornite Battle Bus can be found in one such quest called “Recover the missing Battle Bus Plans“.

For the Recover the missing Battle Bus Plans resistance quest, you just need to find one of the three Battle Bus Fortnite blueprints in any of these locations (as can be seen on the map below)

The best location to get the Battle Bus Fortnite blueprint is Coney Crossroads. This location, unlike Condo Canyon and The Daily Bugle, is significantly less packed with IO members and other players, making it easier to obtain the blueprint for the battle bus.

This resistance mission can be completed by collecting all of the Fortnite Battle Bus blueprints and you can earn 23,000 XP. Do keep in mind that this quest is new, therefore it is likely that a lot of people will be trying to compete to get them. When you arrive at the locations, keep your eyes peeled for other enemy players.

So there you have it! It’s all there is to know about the Armored Fortnite Battle Bus, Funding Stations, and Blueprint locations in Fortnite Chapter 3 Season 2.

Fans of Fortnite Chapter 3 Season 2 will be pleased to learn that Epic Games has added a tactical sprint mechanism, as well as new Doctor Strange and Prowler character models, to the game for Season 2.

Here’s an awesome video by KingAlexHD on Where to find Battle Bus in Fortnite! (How to Get Battle Bus Vehicles Location):