Anima: Gate of Memories Arcane Edition Review – Not Too Bad

Anima: Gate of Memories takes place in the world of the Anima tabletop RPG, which is inspired by western fantasy and modern Japanese anime tropes. This is clearly evidenced by Jeanne d’Arc lookalike protagonist, the deadpan edgy personality-less Bearer of Calamities, and her partner Ergo Mundus, snarky and fourth wall-breaking all-powerful evil sealed in a book, who reminds me of Angra Mainyu in more ways than one.

In fact the whole thing could have taken place in the Fate franchise with players none the wiser, with the setting revolving the main characters beating up a series of extraordinary individuals, including a fairy king, a puppetmaster, a shadow demon, and the head of the church. All this because someone tried to summon something from a cursed book. It doesn’t help that the enemy design and combat all reminded me of Fate Extella, particularly because you spend a good portion of the game zooming around whacking armed marionettes. This makes sense because of the setting, but a lot of the time while playing Anima, I wished I was playing Fate Extella instead, which isn’t a good thing as Extella is pretty mediocre at best. 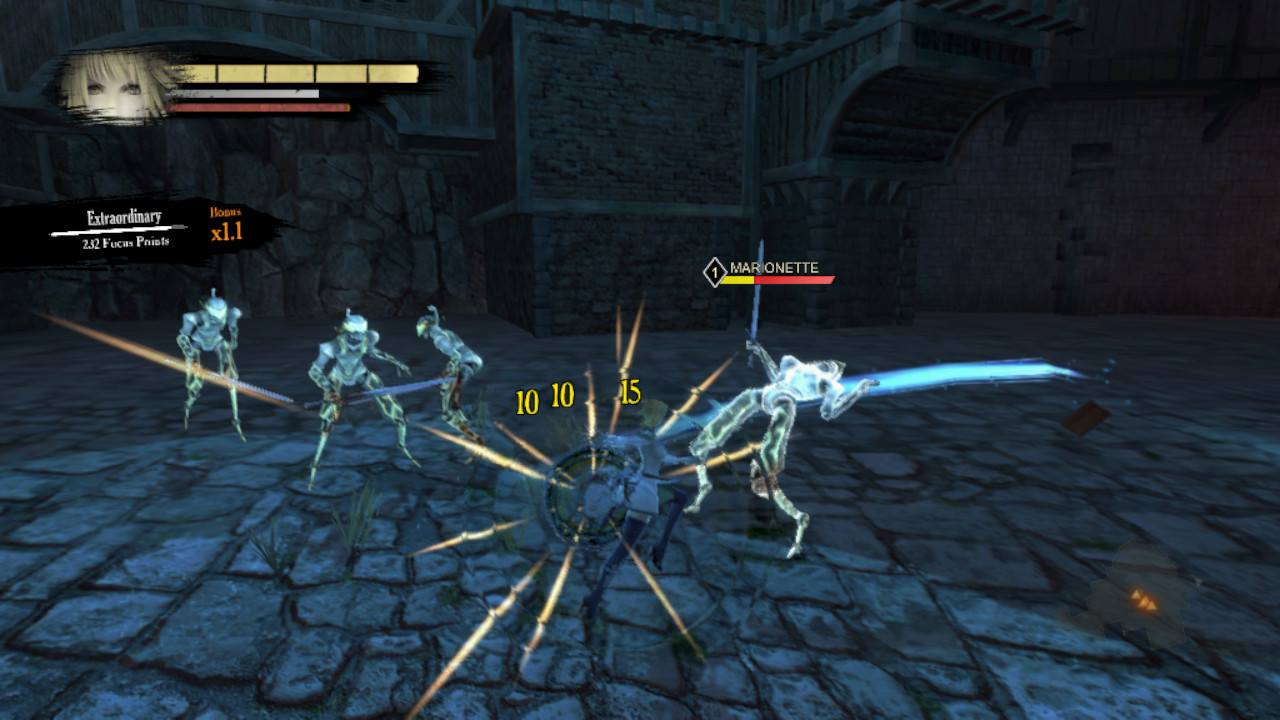 What this game has over Extella is a combat system that has a lot of room for customization, with various ranged and melee attacks that can be chained together. The system is unique in that it allows you to switch between the two playable characters to chain their attacks together, and the game encourages it in certain levels. The combat and level design takes inspiration from DMC and Bayonetta, though the general level of flashiness isn’t as high. The controls work pretty well to begin with, although I have some gripes with how the battle system and enemy design affect combat – you can get shot off a ledge with consecutive ranged attacks without any opportunity to recover, and you tend to spend a lot of time zooming towards the aforementioned marionettes and bosses as opposed to making combos. It’s pretty satisfying once you get into a groove, but the game takes a while to get you to that point. 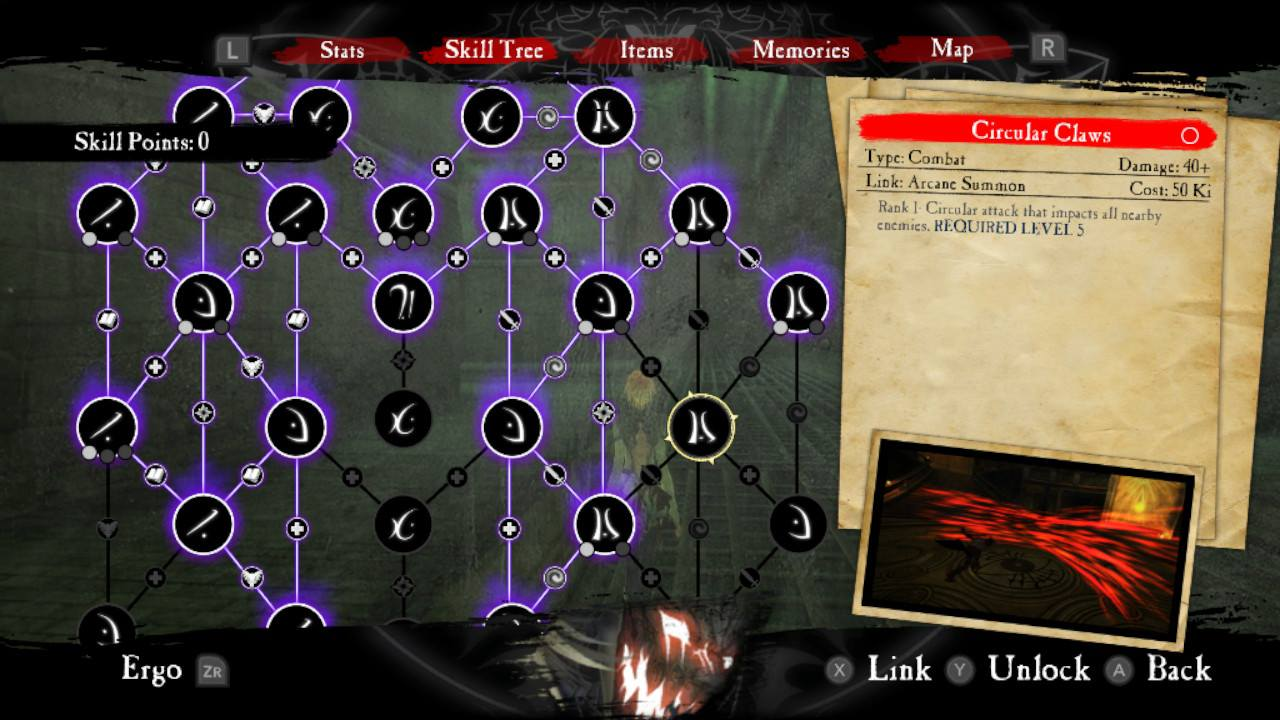 Skills are unlocked by leveling up and by plotting unlocked points on the skill tree. These also add more stats to either character. While Bearer and Ergo have different moves, health gauges and customizable controls, they share a mana and ki pool, so it can be useful to build either character to primarily use one or the other resource.

The characters are also able to equip weapons and accessories, though these don’t show on their character models. (Interestingly, the Nameless campaign subverts this as he is given different models for the weapons he equips.) These are where you get the brunt of your stats, and some extra effects like ki and mana regeneration. Balancing these between Ergo and Bearer adds to the customizability – I ended up building Ergo as a rush melee attacker while Bearer was relegated to spamming ranged attacks with high ki and mana regeneration to compensate.

The boss encounters are a great opportunity to let you show off your skill, though in later fights they’re more about dodging and timing (think Monster Hunter) as opposed to hack and slash style quick comboing. The bosses generally have phases in which they use sets of attacks, with more new attacks appearing as you wear them down. I found some of them a bit grindy, and some of them a bit lacking – there’s a lot more that could have been done with these fights but they’re pretty solid and remind me a lot of PS2-era boss design. Overall they’re not too tough aside from the latter ones, where you’ll need to really get the most out of the phases where you can deal damage. 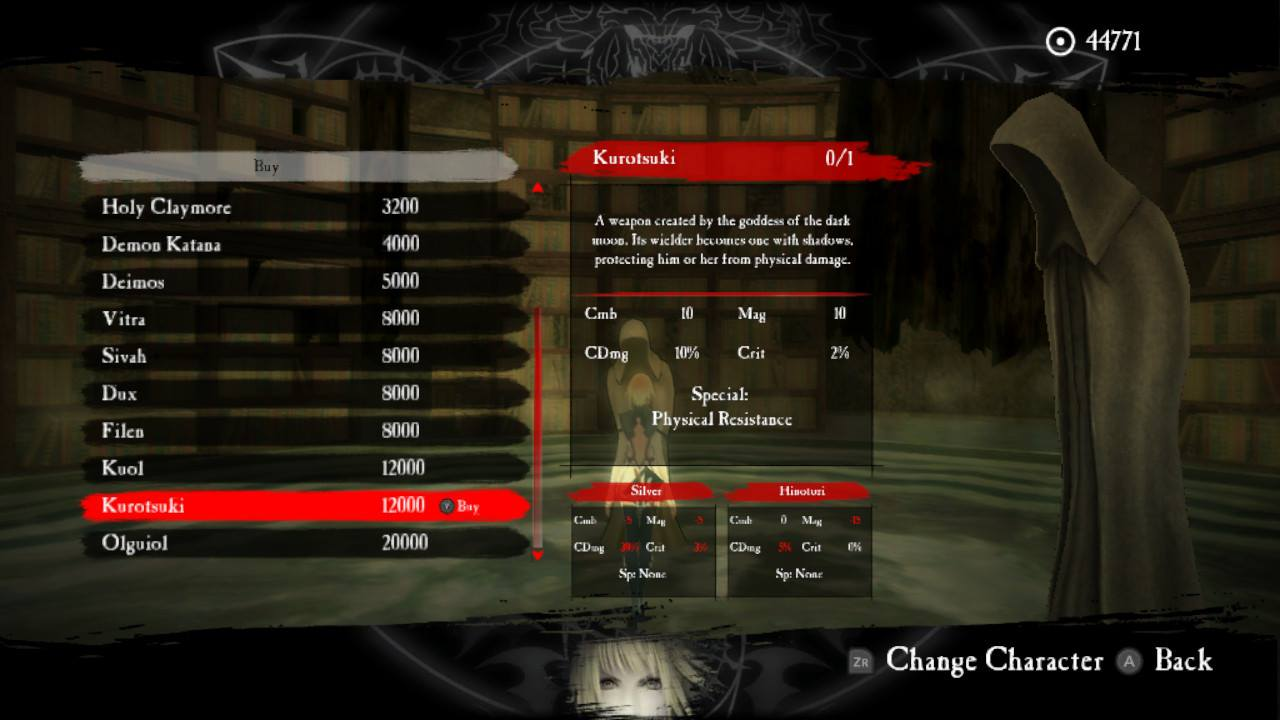 Speaking of PS2-era design, levels are accessed from a central hub called Arcane. It is vaguely Persona 3-ish in that it’s a tower with an item shop, and function-specific NPCs that can be unlocked over time by rescuing them from dungeons. In Arcane you can talk with some NPCs and have Bearer and Ergo converse with each other, which explore more about both characters’ backgrounds, though it would have been nice if these were worked into the story more organically.

The levels are designed well, though the platforming leaves a lot to be desired due to the camera and due to how movement works and feels. Collecting all of the boss memories and some items for achievements will require a fair amount of platforming. To the game’s credit there don’t appear to be a lot of reasons to backtrack, but there’s more than a few items that will need to be double-checked via walkthrough as the levels aren’t designed in a way that you can bump into some of these items naturally. 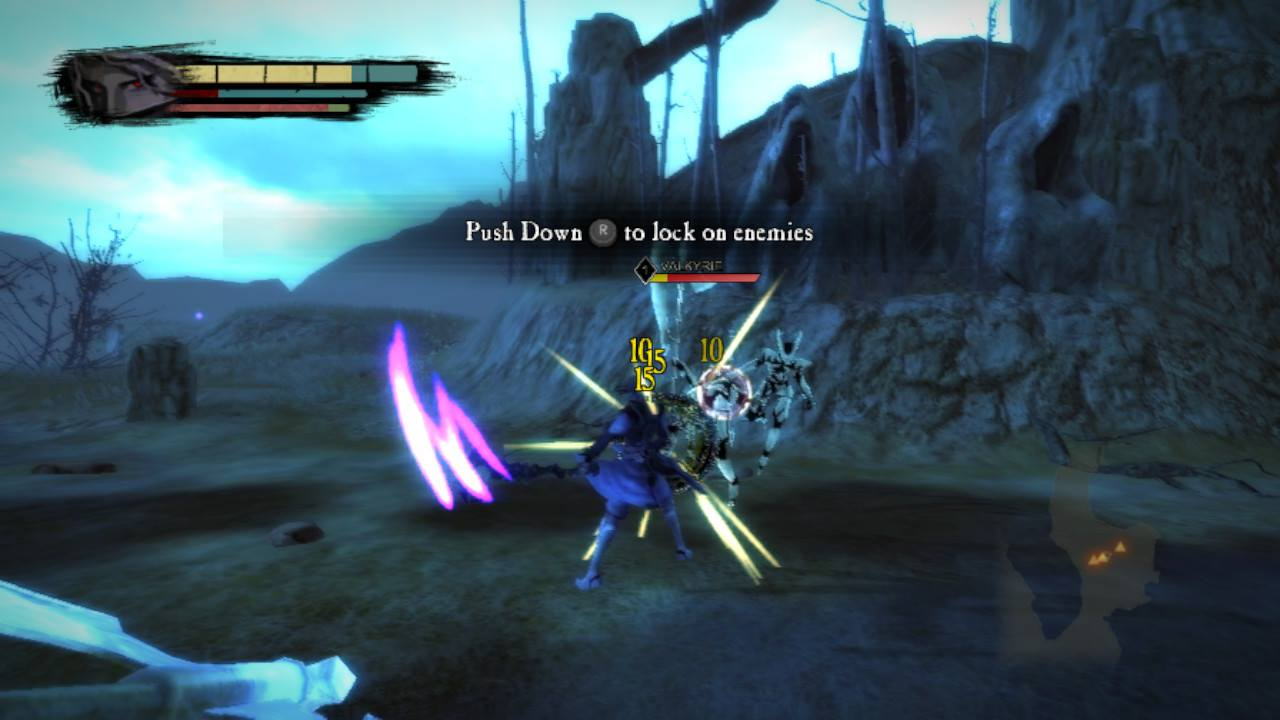 The Arcane Edition includes the Nameless campaign, where you can explore another part of the game’s story, with some maps exclusive to the campaign. I’d recommend playing through the main story first as this campaign has a lot of story spoilers. Nameless himself handles much better up front than the Bearer/Ergo combo, with a different resource to replace magic. The combat and levels are largely the same, though there are some specific areas that you can access as Nameless that don’t appear if playing as Bearer. Overall I found this mode to be more fun, though lacking in customization as you literally have double the options with Bearer and Ergo. 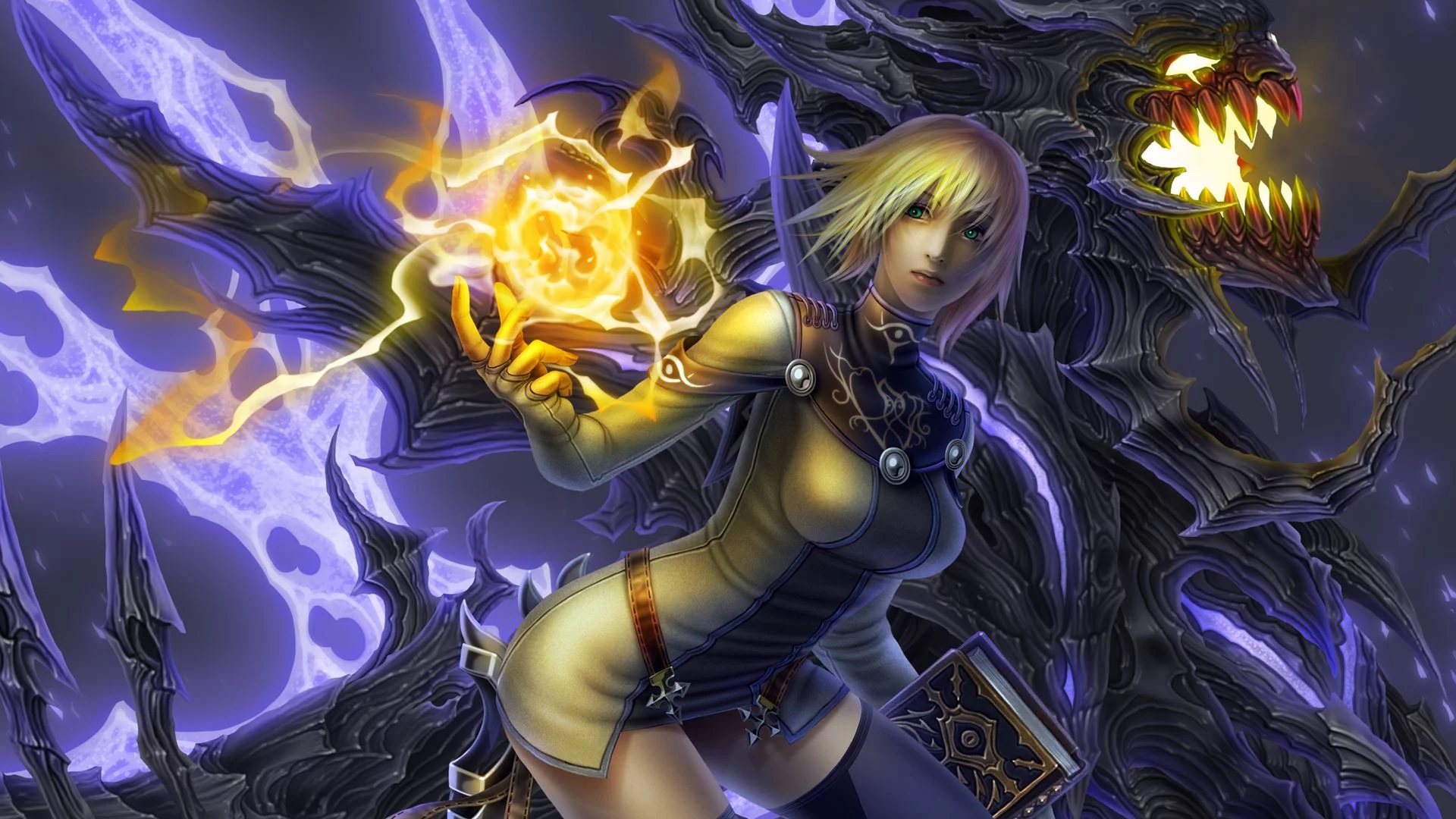 Anima: Gate of Memories Arcane Edition Review – Not Too Bad
Score Definition
We tell you, it’s a good game! It’s not average! It might have some problems here and there, but you have to admit it is a “Good” game.
Pros
Worth its price!
Feels like a PS2 game
Interesting worldbuilding
Customizable combat system
The Nameless campaign
Port Switch works well
Cons
Frustrating controls
Feels like a PS2 game. on. the. Switch.
Involves a LOT of reading
Sexualized characters designs can be a turnoff
Non customizable menus and cameras
7
Good