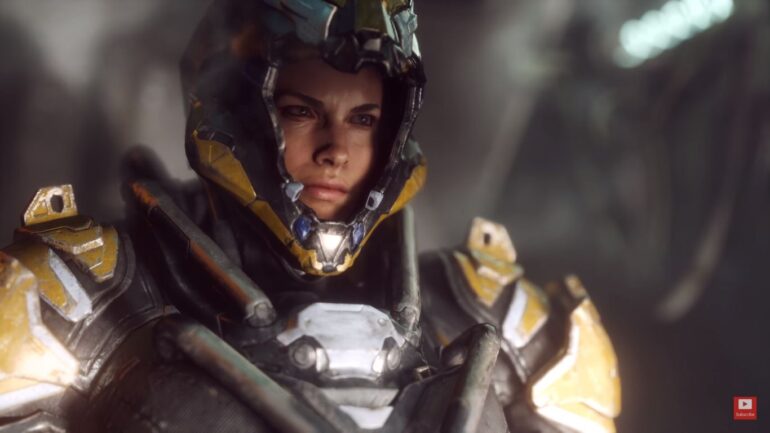 Ever since the game’s initial announcement at E3 2017, it has been unforgivingly compared to Bungie and Activision’s popular FPS series, the sci-fi shooters with heavy MMO and roleplaying elements – Destiny and Destiny 2. This game was initially slated for a Fall 2018 release, but the game got delayed. After the controversy surrounding Star Wars Battlefront 2 and the negative reception on Mass Effect: Andromeda, Anthem might just be the saving grace for EA and BioWare. Hence, a delay of Anthem’s release might not be entirely bad news for us gamers.

Anthem’s VIP Demo was active from January 25th to 27th and Sirus Gaming is grateful to have a VIP code. The code was redeemeable through Origin and an invite of to up to 3 friends can be sent. The best thing about multiplayer is being able to experience it with friends. I was full of curiosity on what the demo featured because the demo did not include tutorials. The demo starts with an impressive cinematic that gives a short summary of who the Freelancers, who you are technically.

When I first entered Fort Tarsis, it was on a first-person view. I know that the game in itself is a third-person shooter, but perhaps an addition of a first-person element might also work towards converting TPS players to try something new. The only disturbing thing for me was when talking to NPCs, it seems like endlessly talking at a face with a rather rigid facial expression. Their expressions felt like it was geared towards giving a generic face regardless of the response they give depending on a decision tree dialogue, where you choose your responses to their questions.

Alas, in the middle of your base, you will find your Iron-man looking suit, your first Javelin, and mine came in yellow perhaps because I selected “female voice” which automatically made my character female. I know there are guys out there who would rather listen to a female voice for narration but still want to have a “male” character, unfortunately, it’s not how it works here (stop it Cortana). You will also be able to customize your Javelin suit, and cosmetic upgrades cost coins. I believe that this is where the microtransactions come in, so yes, if you want to have that ultimate look, you can spend, but in this case, the demo only gives you 25 coins for starters. Even with limited options, you will fall in love with how detailed the Javelin customization system can be which lets you pick everything from colors to materials and finishing touches just like customizing a car in Forza.

Gameplay mechanics are great. Even without a tutorial, I was able to catch up quickly on how the controls work to get my Javelin to do combat and tricks. If Insomniac’s Spider-Man received tons of praise for its web-swinging, Anthem has certainly raised the bar in terms of flying in-game. It comes off as a natural high the moment you lift your feet up the ground and maneuver in between rock arches, or as you take a dip in the waterfall, until you land to cool off your gear. Having to cool-down is the limitation, but I think it makes perfect sense since your Javelin is a suit after all. Flying also adds to combat vertically as you fire away on the enemies below. If you combine combat and flying, everything feels responsive and intuitive. I just keep finding myself crashing into walls when flying around during close-combat encounters, but I think it will get better with practice.

Combat is also something that evolves over time as you unlock an additional Javelin (in the demo you only get to unlock 1 more aside from the default Ranger and my choice was Storm) and get more weapons after every quest. You will have to find the right fit because there are weapons with high speed but low cooldowns, or high ammo but range for examples. Diverse weapons make each encounter interesting, even if the demo only offered limited quests and you have no choice but to replay the same thing, or just go on expedition mode to test out your new loadout. The demo also featured difficulty levels at easy, normal, and hard, the only differences that make the hard mode very unforgiving are the sometimes seemingly endless waves of enemies that rather gets exhausting as the quest drags on, especially if you have weak comrades.

But in combat, nothing compares to your Javelin’s abilities and ultimates. To obliterating a large group of enemies with my Storm’s lightning strike, and combine them with my squad’s abilities for stronger combo attacks make things even more satisfying (especially when the end result is a group of enemies being turned into massive loot and rare items).

Respawning is not a very good experience for me. Death in most video games is a matter of respawning after a few seconds, but in Anthem when you die you simply wait in the spot where you died with dulled screen and sounds, no motion control, no nothing, until someone revives you. There’s also no spectator mode, and no auto-respawn option. If everyone in the squad dies, the mission doesn’t end but rather all of you are transported back to the last checkpoint.

They say the worst things about demos have always been the server issues. Anthem isn’t any different. But we are still a month out from launch so my patience is still far from being stretched thin. There are also bugs and glitches like losing all the sounds where you have to restart your game to get it back. The good thing is that you get to have the option rejoin the game session you left when you close the game application, as long as you do not choose the Quit option.

Other than that, I would say Anthem is a very intriguing game so far. There are really unique in-game elements that set it apart from other games. And I am really looking forward to exploring this world more in the open beta this weekend (partly crossing my fingers that it will allow me to unlock another Javelin as I badly want to try the Interceptor). Story-wise, we obviously can’t say how things will develop after the very limited scenes we have unlocked in the demo so far, but the opening has definitely caught my interest.

Tested On: A standard PS4.